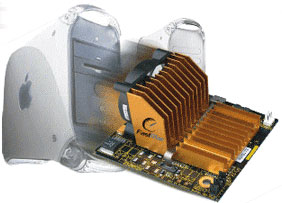 One of the great things I found about Macs when I switched from Windows was how long they last. My first Mac was a five year old Titanium PowerBook G4, and yet despite its age it was capable of running OS X 10.3 Panther, which was current at the time. You can try and pull the same trick with a five-year old Windows machine and you will find it a fairly desperate experience, principally because of Windows bloat – Microsoft’s code gets bigger and slower with each service pack, anti-virus package and patch as time goes by.

However, Apple’s latest operating system Mac OS X 10.5 Leopard requires a faster processor than is available on the cheapest machines before it will even install – at least an 867Mhz G4. Capitalizing on the value and utility of the older Macs, I was running a 450Mhz PowerMac G4 machine at work, so clearly Leopard was not going to install on that machine without a hack of some description. Fortunately, FastMac’s processor upgrade line came to the rescue, and I was able to put in a faster processor to my machine and get Leopard installed.

FastMac processors are incredibly easy to install – with one caveat that is really Apple’s fault. You see, for support of these faster processors your PowerMac G4 need the latest firmware upgrade to the motherboard – and the firmware installers provided by Apple will only work under OS 9. If you only have OS X installed, it can be a struggle to meet this requirement, as in my experience the firmware upgrades don’t work properly under Classic from within OS X. I ended up pulling my main hard drive and putting in an old 10Gb drive I had lying around, and installing a fresh OS 9 partition to run the firmware updater.

Once you have overcome that hurdle, however, installation is a breeze. Just pull the handle to open the side of the machine, and unscrew the three processor heat-sink screws, and the original processor and heat-sink will come straight out. Installing the FastMac processor is the reverse of the procedure, and there are dip switches to adjust the processor speed depending on exactly which of the PowerMac G4 models you own.

One reboot later and the machine is up and running with a powerful new heart. Right from boot-up, the faster processor was noticeable, with the machine starting more quickly and OS X responding more snappily. FastMac are proud of the components they use, with the best available variants of the G4 and large processor caches being used to optimize performance. I did run a few benchmarks, but really they are a poor measure of what a change this sort of upgrade can make to your machine – because each user’s actual performance will vary depending on the exact configuration and software load of their system. What I can say that is probably more useful is that the performance of the machine is transformed, to the point that pretty much any normal office or Internet application runs effectively under Leopard. The whizzier aspects of the interface – Spaces, Expose and the Dashboard – all work well, and Microsoft Office 2004 opens large Word and Excel files without breaking a sweat. Fullscreen videos also play back very well, which can traditionally be very taxing for underpowered machines. Only more stretching tasks such as video editing or heavy Photoshop use are less advisable.

The question that naturally comes to mind with a Mac upgrade like this is how does it stack up on the value money front? At what point does upgrading an old machine become less cost effective than buying a new Intel Mac? A base Mac Mini comes in at $600, but with Intel Core 2 Duo processing at its heart is substantially more powerful than any G4 processor ever made. However, the Mac Mini is a single box solution with very limited upgrade potential, so once you want more storage or memory you may find it wanting. A PowerMac is a very different animal, and PC standard parts can be used to upgrade any aspect. Given this, I feel that provided you don’t need a large amount of raw horsepower, you can spend 40% of the price of that new Mac Mini and get a very workable Leopard Mac.

MyMac Magazine Rating: 4 out of 5