John O’Connor wanted to purchase a support for his 15 inch PowerBook, “but most of the laptop stands were to be used in conjunction with an external keyboard,” as he tells MyMac.com. O’Connor “wasn’t interested in trying to make my PowerBook into a desktop computer. I wanted something that was functional, portable, and stylish. As a designer and a machinist, there was no way I was putting my new $2,000 pride and joy on a $3 piece of plastic.”

He measured and cut and fastened strong, lightweight aerospace-grade aluminum segments until his Inclinepro was created. Its goal is heat transfer, extended battery life, and user comfort. This product succeeds on all three. Bonus: when O’Connor claims that “at just seven ounces, the Inclinepro is virtually weightless and collapses to a thin profile that easily fits in standard laptop computer bags, making it a very low impact travel companion,” he’s accurate on every point.

Inclinepro costs $75 US, and is available in anodized silver, with specific models for each recent version of MacBook Pro, MacBook, PowerBook G4, and iBook G4. If $75 sounds a little expensive, when you hold and use Inclinepro for a day or two you’ll consider it a bargain. Aside from a sturdy laptop case, this exceptional stand will immediately become your computer’s most valuable accessory.

O’Connor continues: “After using the new and improved design I realized that having the screen raised and the keyboard angled have ergonomic benefits. When people place their Mac on the Inclinepro they all usually do the same three things. They push the computer away, they lift their chin, and then they drop their wrists.”

The great composer J. S. Bach wrote most of his compositions at a standing desk. I do a lot of email standing in front of my dresser, with PowerBook G4 resting on Inclinepro. Here’s a photo: 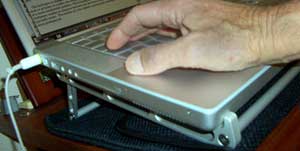 Question: Does Inclinepro work as a lap stand? Just a moment. I’ll test it and be right back.

Answer: Yes, sort of. You need a flexible but firm cushion between Inclinepro and the tops of your thighs, because the metal rear tube isn’t comfortable. O’Connor is “thinking of producing a round foam pad (not too unlike a piece of pipe insulation) that slips over the bars for use while the Inclinepro is on your lap.” MyMac.com suggests this foam pad be included at no additional cost.

Important: Apple keeps changing the rear pitch angle of its laptop displays. Don’t !! push your display back too far, or you’ll damage your computer.

Inclinepro is a rare *THERE IS NO STEP TWO* piece of equipment. In less than ten seconds, you unfold its rear leg, set the stand someplace that won’t easily scratch, and place your laptop computer on it. Done. Ready to compute. O’Connor provides a clear protection layer on the bottoms of the feet, but you can’t be too careful when you’re working on top of furniture.

Let’s go back to that $75 price tag. I’m not a marketing whiz, but I predict O’Connor would sell twice as many at $49 than at $75, with or without that tubular insulation addition. I don’t know his manufacturing or marketing/distribution costs, but I understand consumers and why they pay what they think is good value.

Regardless of its cost, Incline pro is a great tabletop/desktop (and possibly thigh-top) stand, and MyMac.com highly recommends it. Rating: 4.5 out of 5.

O’Connor’s company is called Industrialized Nation. It was started in 2002, and its products have include contemporary aluminum furniture and custom designed titanium jewelry. When you click “Contact Us” on the company web site you can see how to communicate directly with Mr. O’Connor via phone, snail mail, or email. There are a few less than stellar photos of Inclinepro here.

Orders for Inclinepro can be placed at the Inclinepro.com URL. O’Connor will be at Macworld in January. Inclinepro’s booth will be in the west hall #4622.