If you are a regular reader of Mac websites and a listener to different Mac podcasts, youâ€™ve probably heard of Pixelmator. Pixelmator is a new image editing program by Saulius and Aidas Dailde – two brothers that make up the Pixelmator Team. Iâ€™ve had the opportunity to try out Pixelmator for a while now (I was allowed to try the beta version), and if you are looking for an inexpensive image editor, Pixelmator is worth a try.

When you first open Pixelmator, you might think Photoshop, but a more fun looking Photoshop. You have a toolbar, a layers window, swatches, a color picker just like you do in Photoshop, except Pixelmator gives it a more Mac look. In fact, Photoshop and Photoshop Elements users will have no problem learning Pixelmator.

The Toolbar has all of the basic tools you would expect: lasso, magic wand, select box, pencil, brush, fill, gradient, eraser, clone, etc. There is your foreground and background color switcher, and the magnifying glass. There is even a button to click for a full screen mode. All of the tool act as you would expect them to act. The fun part of the toolbar is that the icons enlarge when a tool is selected. This is a nice touch.

Pixelmator also has all of the basic image editing settings you would expect: brightness and contrast, levels, scale, posterize, rotate, saturation, etc. Photoshop users will find these settings in the same menus you are used, too. As I said earlier, an easy transition from one program to the other.

Filters are also present. The basics like sharpens, blurs, and others are present. There are also some unique Pixelmator effects (seen in the image below). These include halos, stripes, checkerboards, page curls, and more. The blue bar on the left of the image is the “Copy Machine” transition. You can even activate many of these features through Automator actions. 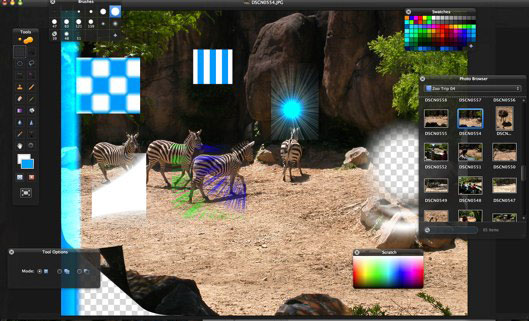 One of my favorite features is the Photo Browser. Similar to iWeb or iMovie, Pixelmator allows you to browse your iPhoto library and your Pictures folder for images you want to edit in the “Photo Browser”. Double clicking the image you want opens it in Pixelmator. I am always opening images from iPhoto for editing, and this is a great feature. If you want to make a self portrait, Pixelmator is iSight compatible. Take your picture and send it straight to Pixelmator through the Layers menu. 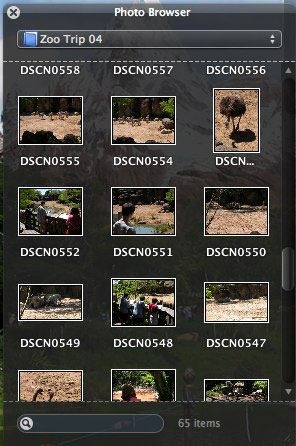 Speaking of files, Pixelmator is compatible with over one hundred file formats, including Photoshop PSD files. However, while it opens PSD files, and imports layers from Photoshop files, effects applied with Photoshopâ€™s â€œBlending Optionsâ€ for individual layers did not import.

The above mentioned problem is the only problem I encountered while using Pixelmator, and while writing this review an update with numerous fixes was released (this issue was not). While that was my only problem, there are a couple of features Iâ€™d like to see in a future update. First (and second, I guess), there are no grids or rulers. I use rulers all of the time when I work on an image, and grids go hand in hand with rulers. Third, as you might be able to see in my images, the Pixelmator palettes are transparent. This looks good at first, but Iâ€™d prefer the ability to make them opaque. A busy background can become annoying through the transparencies. A preference option would be great for this.

Even with the above issues, Pixelmator is a great program that is loaded with features (for a comprehensive list go here: http://www.pixelmator.com/specs/). For $59, it is cheaper than Photoshop Elements, and well worth the money. You canâ€™t find a cheaper image editor that can do all that Pixelmator can do. If you are looking for a Photoshop-like image editor without the Photoshop price, I highly recommend going over to the Pixelmator website and downloading the demo, and/or purchasing this program.

I look forward to future updates and releases, as Pixelmator grows from what is a great start.

One thought on “Pixelmator
Review”