Last weekend, Chad Perry (of MyMac.com Podcast fame) and I ventured up to the new Apple Store in Ann Arbor, Michigan to check out the iPhones, iMacs, the new keyboards, and pick up copies of iLife ’08

First, the new Apple Store in Ann Arbor is a nice place, not much different at all than any other Apple store in any other mall in America. Small, clean, and full of people. The staff were very nice. While paying for iLife ’08

at the counter, I witnessed a gentleman with a Powerbook (or Macbook Pro, could not tell) battery problem. It would only hold a small charge, and drain very quickly. Time to buy a new battery? Nope, the helpful Apple Genius informed him that his particular batter was recalled, so he would be getting a free replacement. Nice!

After looking at the new iMacs, and wanting one a lot, Chad and I spent the most time playing with the iPhone. I had only seen one in person up until now, and that was under glass at the Macworld Expo back in January. I had not actually had the chance to play with one. And I kind of wish I hadn’t. You see, I can’t think of any justification to give Julie (my wife) why I should buy it. None. And that’s a problem, as I now want one. VERY badly. As does Chad.

I had planned on buying the new slim keyboard, but alas the Apple retail store is not selling them. The only way to get one now, it seems, is to either buy a new iMac, or order it online from Apple. But I wanted one now!

What I did pick up was the new iLife ’08

. While I type this, I have not yet had a chance to look at any of the other application in the bundle besides iPhoto. I have 6,130 pictures in my iPhoto library, and after updating to iLife ’08

, I have spent the last two hours simply putting together the new Events.

Events in iPhoto is a great new feature. In fact, for me at least, it is worth the price of admission alone. After installation, iPhoto ’08 took about a minute or so to update my library, and it gave me 300+ events. Many of these will have to be changed or edited, but it quickly gave me a much better understanding of the power and lure of this feature.

For the past few years, I had been trying to keep up with updating and creating new iPhoto albums, but it was a loosing battle. I could not keep on top of it. Moving the photos, creating new albums, trying to sort and move them around, was simply too large a pain. So I gave up. But Events is changing all that. 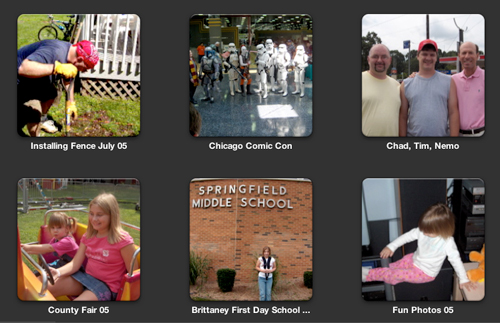 I am actually motivated to put my iPhoto library in order. Let me repeat that for those not paying attention: iPhoto ’08 is actually MOTIVATING ME to be productive and proactive with my photo collection. That, my friends, is no easy feat.

So far, I have gone over about a third of my photos. I did notice that, while drag and drop works well when merging one Event to another, it would be much easier if I could have multiple windows of the same library open, similar to iTunes opening another playlist in a new window. Or if, say, two photos in one Event needs to be moved into another Event off screen, the easiest way right now of doing so is to split those two photos out of the current Event, create a new one, and then in the main window move the new Event to the other off screen. You can use the “Recent” option to the left of the screen, but that does not work most of the time. A slight flaw, and one you only have to deal with when you are initially setting up all your Events. 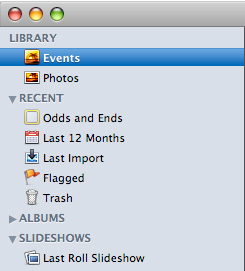 I have yet to try creating a book or calendar with iPhoto (in any version) but with iPhoto ’08, I am motivated to do so.

What’s not really on my radar is using iPhoto’s built-in photo correction tools. I will stick with Photoshop CS3 for that, thanks. While iPhoto’s tools look usable and intuitive, I prefer the sheer power of Photoshop, and my years of experience using it. But for the average home user, I think those color correction, cropping, and other tools will be easy to use and do a decent job of it.

Next time, I will be looking at iWeb, and using iPhoto to create some cool web galleries. (With links!)