Today is Day One – Install on the Macbook Pro.

The easiest thing in the world is installing a program on a Macintosh. It is either drag and drop, or running an installer program. In the case of CS3, it runs an installer program. And not the (sometimes) great Apple installer, but one created by Adobe. It looks very much like a PC installation application, very unMac-like.

The first time I ran the installer, it told me that it could not install Adobe Photoshop CS3, due to a conflict with a copy already installed. Ah, yes, I had installed the Beta version a few months ago. I was only able to use it for (I think) a day before the trial ran out. For some reason, the Beta version would not accept my valid CS2 validation key so that I can continue to use the Beta. In my one day, I was very impressed with the speed of Photoshop Beta, but I did not have enough time to really get to know the application well. Rather than contact Adobe to fix the validation key problem, I just shrugged my shoulders, dragged Photoshop CS3 Beta to the trash, and forgot about it.

Had I spent the time (who does?) to read the Read Me file, I would have learned that you cannot uninstall CS3 by simply dragging it to the trash. Adobe, in it’s infinite wisdom, has decided to employ an Uninstaller application, and you must run that to get rid of the CS3 beta. Opps.

So I found it in my Utilities folder, ran it, and it did not work. Because I had simply dropped Photoshop CS3 Beta in the trash, it would not uninstall all the other little CS3 Beta bits scattered around my hard drive. So the full retail review copy of CS3 Web Premium Installer would not allow me to install Photoshop CS3. And let’s be honest, without Photoshop, CS3 is like buying a car without a motor.

The fix was to download a simple terminal script that would guide me through a series of scary questions (Are you SURE… Do you want to back up EVERYTHING first?) after which it promptly deleted all the files, folders, and preferences from the Beta. (see screen below) 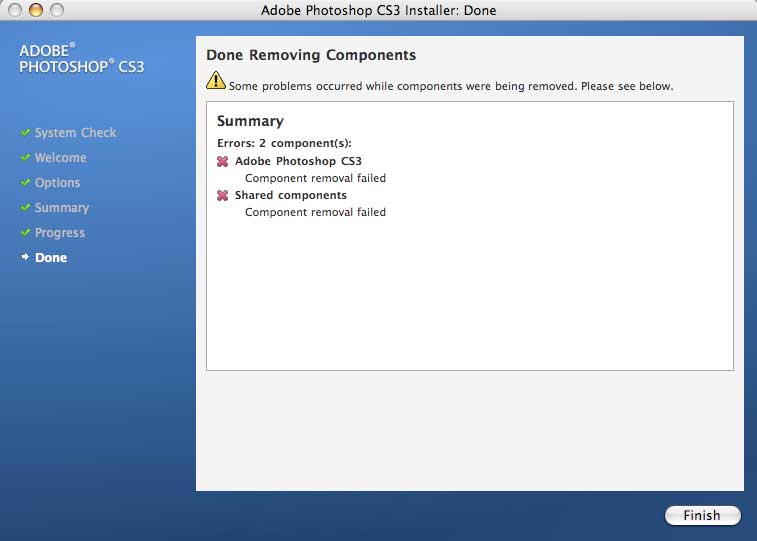 Right now, as I type this, the CS3 DVD is humming and spinning away in my Macbook, happily installing the entire contents of CS3 Web Premium. Later, probably tomorrow or possibly this weekend, I will also install it on the PowerPC G5 Mac. I am curious to see how much faster it will run on both machines over CS2, as well as playing around with Dreamweaver. I have been a GoLive user for years, never moving to Dreamweaver, but John Farr’s excellent review of the last version made me want to switch. (although he will also review the newest version. I just want to play, and review a few of the other applications.)

So if you are having problems getting CS3 to install, here is the link to the terminal script if you made the same mistake I had. (Mac or Windows) http://www.adobe.com/support/contact/cs3clean.html 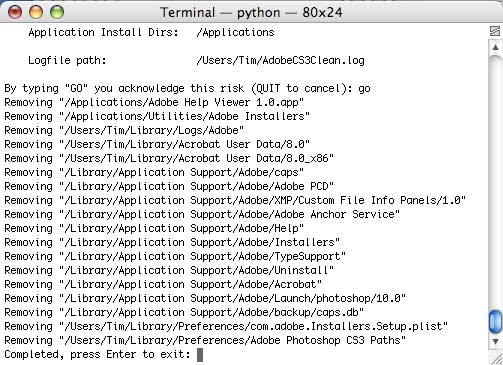 More after I have had a chance to play…

(Aside #1: I have to say that CS3 is one of the slowest installs I have had to wait for. I don’t know the level of compression used to fit all the applications and support files on the DVD, but it seems to be taking much longer than I am used to. And the heat from my Macbook Pro is way higher than it normally is, both by the DVD drive bay as well as the rest of the machine. It has been almost a half-hour so far, and is at around 90% complete.)

(Aside #2: What’s up with the ugly application icons in CS3?)