For the last several months I’ve been looking for a slide show application that would enable me to quickly post Flash Player slide shows to my website. Yes, Apple provides Quicktime slide show features in iPhoto and iDVD, but I’ve found Flash Player formats to be seriously smoother and easier to download than Quicktime movies.

After searching and trying out three or four different solutions that would work with my .mac website/account, someone recommended Soundslides. I downloaded the trial version and immediately liked the the layout and simplicity of the application. 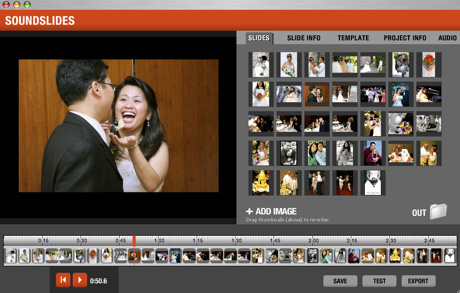 With a folder of my photos already prepared in jpeg format and a selected mp3-formatted song on my desktop, I was able to a create flash-based slide show with Soundslides in under five minutes. Testing it out and making changes to the order of the slides was very easy and straight forward as well.

The biggest problem, however, was how to publish the slide show to my .mac account. It doesn’t appear as though you can embed Flash files into iWeb pages. I thought I could simply drop my Soundslide Flash project folder into my iDisk folder and link to the html page from there, but that didn’t work.

Well, a simple question about my problem to the developer of Soundslides was answered over night. He directed me to support page where they had already published steps to how to set up and link to a Soundslides slide show posted on your iDisk account. Again, within a few minutes I was able to update one of my iWeb pages and link to the Flash file. Problem solved.

Soundslides Features
Soundslides is seriously simple and straightforward. It’s not bogged down with bells and whistles, and it does come with basic and advance custom features that enable you to change and personalize the design of the Flash Player web pages. If you have some skills with Macromedia Flash you can do even more customization. 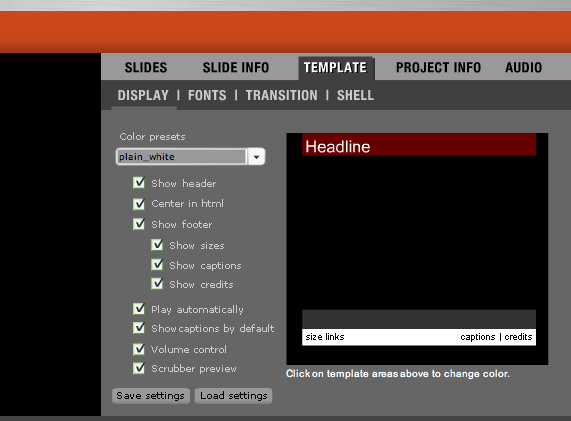 The length of Soundslides slide show are basically determined by the length of the music you’re using. So if you want say a short one minute slide show, you need to find a song that is one minute long, or at least be prepared to edit the length of your selected song to the duration you want.

Since producing my first slide show, I’ve opened up Garageband and edited a couple of songs to the duration of the time I might use, also adding appropriate fade-in and fade-out markers for better listening. I also created in Photoshop a solid black jpeg file for my opening slide and another black clip with my business logo for the closing slide. With the opening black clip, the first photo doesn’t just pop up in the slide show, but instead black slide dissolves into the first photo slide.

You can adjust the individual length of each slide or you can tell Soundslides to make all photo slides the same length in line, with the duration of the music. After you’ve completed and tested your project, you simply upload to your server and you’re good to go. There are some features I wish Soundslides had, but I can wait for what I know will be useful updates in the future. It seems as though the developer or developers of this program have already worked hard to make a much needed and intuitive program that solves the problem of posting Flash-based slide shows on the web. Downloading my project on a couple of different computers and web browsers resulted in a very smooth presentation of both the Flash content and the sound.

Lastly, one of the best compliments I can make about Soundslides is its price: just $39.95. An affordable price for a very useful program. Soundslides in my opinion should be a part of all Apple’s iLife and professional image presentation applications.