Wireless remotes for your iPod have been around for a while. Recently, a new generation of remotes has started to appear on the scene. These remotes have displays to show you what you are playing on the iPod. The iJet Two-Way is one of these remotes.

The iJet Two-Way is available in black and white, and it is compatible with any iPod with a 30-pin dock connector. It requires one AAA battery for the remote control.

The system consists of the remote and the receiver. The remote is a little box that measures a little less than 1 1/2â€x2 1/2â€, and it is about 3/4â€ thick. It also has a small (about 1/2â€) antenna on the top, the iPod control buttons, and a 2 line LCD display. The receiver, which attaches to the dock connector of the iPod, is the width of a full sized 5th generation iPod, less than an inch long, and as thick as an 80GB iPod.

Unlike other remotes with a display that I have seen, this remote does not require a dock connector/base. You can leave the house and go anywhere with the iJet Two-Way connected to the iPod.

As with other iJet remotes I have reviewed, the basic remote features of the Two-Way are great. You have play, pause, volume up and down, skip, and scan. Holding the play button will even power down the iPod. The range of the remote is fantastic, and the box states you can go up to 150ft away. I had no problems having the remote work from the third floor of my house to the basement.

The receiver has some improvements over older iJet remotes. Like the other iJet receivers, this has a dock connector at the bottom so you can charge your iPod with the remote connected, or even sync it. In addition to that, you can now change the volume of speakers connected through the dock connector by using the remote . New on this receiver is a headphone jack. This is great for Nano users, and it also improves the sound quality over listening through the standard headphone jack. If you use the standard jack, some of the remote controls will not work.

The LCD display is what makes this iJet remote different from the other iJet line. The display is made up of two lines, and has a blue backlight. The backlight makes the display easy to see and read. 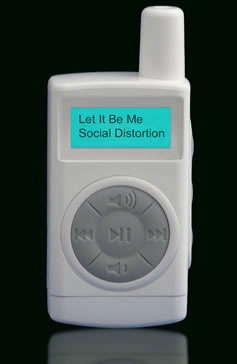 Using the display, and corresponding buttons, you can scan your iPod for artists, songs by an artist, and your playlists. You choose which list you want to see buy clicking a button on the side of the remote.

You cannot scan specific albums. For this I would suggest making album specific playlists.

The only issue I had with searching my iPod is that the remote picks up audiobooks and podcasts (video podcasts, too). However, these are not categorized, they are just lumped together in the list of artists. So, once again, specific playlists would be suggested for sorting these out. Video playlists are also detected. If it is in a playlist, it will be listed.

In order for the remote to display the playlists and artist list you have to load them onto the remote. This is where the Two-Way falters, and the directions that come with the remote are no help. In fact, they confused me even more.

The first time you use the Two-Way you choose if you want to load playlists or your artists off the iPod. When I did this for the first time, I chose playlists. By choosing playlists the artists and tracks not in those playlists were not loaded onto the remote. Trying to load the entire artist list using the same procedure did not work.

I tried every troubleshooting reset, and I still could not load the rest of my artists.

Finally, I found directions for using the remote on a second iPod. This button combination allowed me to load all my artists and playlists at once. I was now able to search through the lists of artists through the remote and choose who I wanted to play.

I then ran into another problem. If you add tracks to iTunes or change your playlists, how do you update the remote? There is no mention of this in the directions. The only method I found to work was using the button combination I found for using the remote on a second iPod.

I finally thought I had figured things out. However, I discovered that the remote did not always load properly and some tracks by random artists were not listed. I reloaded the remote, and it seemed to correct itself.

Once loaded the remote does work great. I have an in-line jack in my car for my iPod, but it is under the armrest console. With the Two-Way I can choose a playlist or artist off my iPod without having to get the iPod out of the console. It is also great for those who play the iPod through a house/office wide speaker system. You can control the iPod from another room of the house or office.

Unfortunately, the issues with loading the remote, the bad directions, and a high price of about $130 (I have seen it at various internet stores for under $100) makes this a hard product to recommend. If you have the money to spend, consider yourself good with gadgets, and you have a lot of patience you might want to give this a try. For everyone else I would suggest the one of the other iJet remotes, which are great.

Hopefully, ABT will continue to work on what has the potential for an amazing iPod remote.

Pros:
Remote controls for controlling the iPod work great
Great range
No need for a dock connector/base
Remote displays what you are playing and lets you choose what you want to play without having to use the iPod