If you are a podcaster, musician, or active audio online chatterbox, run-don’t-walk to your local audio dealer or Internet merchant and buy a Samson USB condenser microphone. In less time than it takes to read this sentence, you’ll be recording or conversing in iChat, Skype, Garage Band, or Audio Hijack Pro.

For solo voice, the single-pattern model CO1U ($80 US) will suffice. It’s the best selling USB mic currently available. Samson provided a three-pattern microphone for our evaluation, and it’s worth the extra $50. Put CO3U on your holiday wish list, or start saving.

Setup is instantaneous, requiring more effort to extract the microphone from its plastic cocoon than to connect via USB and begin using it. I timed myself, and in under five minutes I opened the three packages: one each for microphone, stand, and spider mount. Two minutes later I was doing a test recording, and shortly after that I was Skyping and iChatting with buddies worldwide.

Audio quality is remarkable. You can hear an example in our MyMac.com Podcast #108. My “Book Bytes Live!” segment begins at the 37:27 point into the show, which is near the end, between Robert’s insightful “Speed E-Review” and Guy’s oddball “Not Mac News.” My whiny, croaky voice never sounded so good, either in person or in a recording.

I just tested distance and clarity during an iChat with cousin Jim Nemo. He said I sound perfect between one and three feet from CO3U. Around five feet away, my vocal presence remains clear and strong, but with a feeling of the space gap. By ten feet from the microphone, the signal is too weak. 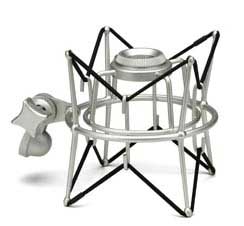 Samson’s multi-pattern feature allows two people to share the microphone, facing one another at a comfortable distance, in addition to the full-frontal position typical of a single speaker. The third pattern is what we used to call omnidirectional, meaning sounds from all around CO3U are picked up equally. You can learn as much as you need to know about the unit in its well-written and illustrated printed instruction manual. Tech specs can be downloaded from the URL given above, and here.

Musicians will love this microphone. Quiet or loud? Solo or combo? Vocals or instruments? Either way, audio is clear, unbiased, and immediate. At some point in the future I’ll record some live music for MyMac.com, so we can all hear how CO3U performs in that environment.

I made a mistake when I said I was tempted to award Samson’s CO3U Multi-Pattern USB Condenser Microphone an unprecedented “6 out of 5” rating, during our podcast #107. Because Tim, Chad, Guy, and I had not configured my audio connection settings properly, my voice sounded like %+#* (that’s very bad). Listeners were correct to question my sanity based on that amateur-hour goof. The aforementioned Podcast #108 has me sounding fine and dandy, so please accept my apologies and use the latter as an example.

Samson reminds MyMac.com: “Our Podcasting Paks have everything you need to get started in podcasting: USB Mic, shock-mount, desktop stand, cable and software in a durable, aluminum case.”

Let’s avoid hyperbole, and simply say this Samson USB microphone is worth a full 5 out of 5 highest MyMac.com recommendation. If it cost twice as much, we’d rate it the same, but for under $200 US, including stand and spider mount, CO3U is outstanding value. When you get yours, please send a demo recording to mymacpodcast@gmail.com, so other listeners can agree that hearing is believing.