Although there had been a version of the PowerBook 3400 with a G3 processor, the real G3 show began with a totally redesigned PowerBook featuring a slim, black exterior and a larger screen. Apple referred to them all as G3 PowerBooks, but Mac users have instead used their code names, Wall Street, Lombard, and Pismo respectively, for the three generations of G3 PowerBook.

These PowerBooks are important from a historical perspective, because they were transitional between the original PowerBook morphology and functionality and those of the G4 PowerBooks and even the current MacBook Pro. For example, the first generation of G3 PowerBook sported the same ADB, SCSI, and Serial ports as the original PowerBook 170, but the final model in the series lacked these, and instead came with the now-standard USB and FireWire interfaces instead. In addition to these standard Mac ports, these PowerBooks came with the 32-bit CardBus slot instead of the old 16-bit PC Card one, allowing the use of high-performance external devices such as USB and FireWire adapter cards and wireless networking cards. CD drives became a standard feature instead of an optional extra, and for the first time DVD players became available, making these the first PowerBooks that could be used to watch the latest Hollywood movies on the go. Finally, being based around the G3 chip, these PowerBooks were the first to support OS X.

While their specifications were solid, and reliability and performance good, these PowerBooks really distinguished themselves by their design and styling. For the first time since the original PowerBooks were released in 1991, Appleâ€™s portable computers were setting trends instead of keeping up with them. The G3 PowerBooks were extraordinarily thin by the standards of the time, a mere 4.3 cm versus 6.1 cm for the PowerBook 3400. They had two battery bays, giving them an endurance of up to 10 hours, though one of these battery bays was more frequently used as an expansion bay for a floppy disk drive, CD player, or some other device.

Apple consolidated their leadership in laptop design and innovation into a stranglehold with the â€œTitaniumâ€ G4 series of PowerBooks. In terms of performance, these machines were really only incrementally better than the G3 PowerBooks, with things like connectivity and networking being essentially the same. Indeed, in one respect the G4s were less well appointed than the G3s: they did not have an expansion bay. While all the G4 PowerBooks had a CD or DVD device of some sort, floppy disk drives and other storage options could only be added using external, third party devices. 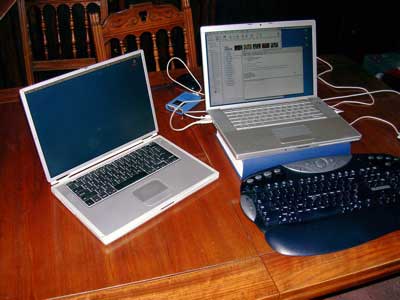 No, where the Titanium PowerBooks scored wasnâ€™t on the inside but on the outside, with their styling. Bucking the trend for Apple computers at that time to have curvy, organic shapes the Titanium G4 series were angular and finished with a shiny metallic paint that gave them a futuristic, techno-industrial feel. In keeping with Steve Jobsâ€™ mantra that Apple computers should be as much home appliances as computers, the G4s were built around an extra-wide 15” screen ideally suited to showing widescreen DVD movies. Successive iterations within the series upped the performance, and a major â€œrebootâ€ took place in 2003 with the arrival of 12” and 17” models alongside the standard 15” one. The new series featured a more durable aluminum casing, which fixed the complaints that while the Titanium G4s were finely designed, the paint quickly chipped off them, diminishing that aesthetic value. The Aluminum G4s were tweaked on the insides, too, with improved performance and upgraded connectivity, including things such as USB 2.0 and AirPort Extreme.

There had always been consumer-level PowerBooks. The PowerBook 100 and PowerBook 150, for example, were machines built to a price rather than a standard. Using slower (but cheaper) processors than the other PowerBooks available at the time, they are often criticized by Apple aficionados, there can be no question that they opened up mobile Mac computer to entirely new groups of people. Following on from the differentiation between the Power Mac and iMac models in the desktop range, Jobs introduced the â€œiMac to goâ€ portable, the iBook, in 1999. What really set this machine apart wasnâ€™t that it was a cheaper, lower-end version of the main PowerBook line, but that these machines were designed with the home user in mind.

The original iBook sported a curvy, clamshell enclosure recalling the styling of the fruit-flavoured iMacs but also being durable and easy to carry. Opinion was fiercely divided over the merits of the external design. Some thought them whimsical and appealing, others hideously ugly. Either way, these computers sold well. The iBooks were completely redesigned in 2001, the result being a smaller, lighter machine essentially a translucent white version of a regular PowerBook. Speed bumps over the years kept them fresh, most notably with the use of the G4 chip from 2003 onwards, and the iBook remained a fixture of the Apple line-up until being replaced by the MacBook in May 2006. 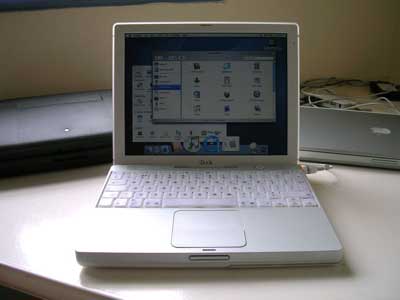 Though these improvements to the PowerBooks looked good on paper, in reality they were largely offset by the slow rate of improvement with the G4 itself. The fastest processor used in the PowerBooks was the 1.67 GHz G4, which was substantially slower than the G5 processors used in contemporary PowerMacs and iMacs. Moreover, the energy demands of the G5 processor and especially the heat it produced meant that it was totally unsuitable to use inside a PowerBook. Desktop Macs were fully able to take advantage of the speed of the G5 though, and even the consumer-level ones like the iMac were more than twice as fast as the supposedly high-end PowerBook.

When Apple announced its switch to the Intel processor, the PowerBooks seemed to many to be the computers most in need of the upgrade. With the release of the 15” MacBook Pro in January 2006, the PowerBook gradually wound down, with the 12” and 17” MacBook Pros replacing their G4 predecessors less than four months later. While the MacBook Pro is a very different beast as far as its processor goes, in many ways it is essentially the same as the G4 PowerBook, sporting the same basic layout, connectivity, and network connections. Its lineage obviously goes back to the PowerBook 170, with the trackpad and mouse button in just the same place as the trackball was in its distant ancestor. The family resemblance is clear for all to see, and the unfussy exterior and discrete arrangement of ports and slots immediately sets the MacBook Pro apart from contemporary Windows laptops, which are invariably much more cluttered, with flashing lights and randomly arranged ports scattered all over the place. Plus câ€™est change, plus câ€™est la meme chose.