Interface and Drawing Tools
When you first open Moho, your gut reaction might be to think that the program is too complicated. The interface is very intimidating. You are presented with the workspace, a ton of tools, and several other windows. However, once you catch your breath and start playing with Moho, you see how much fun, and easy, the program really is. 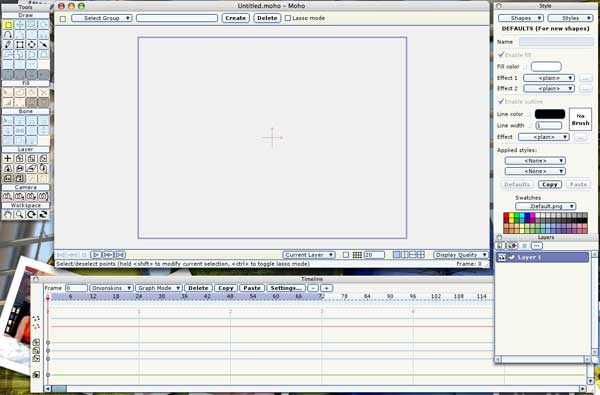 For people, like myself, who are used to Illustrator and/or Flash, it will take a little adjusting to the tools, their names, and how they work. Just because they look like a selection tool in Illustrator does not mean it is a selection tool in Moho. However, each set of tools is related to help make it easier to find what you need. Plus, the name of the tool pops up when you hold the pointer over it. There are drawing tools, fill tools, bone tools (more on bones later), layer tools, and others.
As an illustrator/cartoonist that uses the computer for some artwork, I really like the drawing tools. They are very smooth and responsive, and Iâ€™d love to see some of the features in the next version of Adobe Illustrator.

Moho comes with a fantastic tutorial that explains all of these tools, and others. It is definitely the way to get your feet wet in the program.

In Moho I can draw the keyframes and Moho will automatically fill in the animation between them, making a smooth animation. I really like this feature. You can also choose to animate the traditional way and draw every â€œinbetweenâ€ image. Just like other animation programs, the frames are organized on a traditional timeline under the workspace.

Another feature that should be in every animation program, and is in Moho, is onion skinning. This allows you to see your previous frame(s) underneath the current frame you are working on. The onion skin feature helps the animator know where the drawing in the current frame should be.

Moho also allows you to import audio tracks into your animation. It can be speech, music, or sound effects. They also have a link on the Lost Marble website to a program called Papagayo, which will make adding speech to your characters a lot easier. Plus, its free!

My favorite part of animating in Moho has to be bones. Bones makes animation so much easier, quicker, and more natural looking.

In simple terms, bones let you take a drawing of a character or object and turn it into a marionette. By adding bones you are able to add joints to any part of an object or character. Hereâ€™s an example I made. The first animation does not use bones, while the second animation does. Both have the same number of keyframes.

In order to get the first movie to look like the second, I would have to draw a lot more keyframes. I also would have had to invest a lot of time.

Have you ever tried animated smoke or snow? It can take hours. Moho saves you those hours by having these special effects and others ready to go for you. All you have to do is add them to your cartoon.

Mohoâ€™s camera controls are great. You can zoom in and out, as youâ€™d expect. You can also pan left and right. A feature Iâ€™ve never seen before is the ability to create a 3-D world in a 2-D program. You can move in and through the world you are creating with the camera.

If you have an image you made in Illustrator that you want to use in your animation Moho can import it for you. It will also import EPS, JPG, BMP, Targa, GIF, PNG. and 3d objects from modeling programs. You can also import Quicktime movie files.

Moho does not export in hundreds of formats, but you can export your final movie in Quicktime and Shockwave Flash format. For most people that will be fine. It will also export still images.

If you are only interested in making an animated movie, I would definitely go with Moho. It is a lot cheaper, and in my opinion easier to use (once you get used to it). With bones, the special effects, and other features, it is more focussed on making a movie/cartoon than Flash is.

If you want to make an interactive animation or game with buttons and mouse overs, then Flash is the way to go. As I just mentioned, Moho is more focussed on the animation. There are no button features or interactive features you can add to the animation in Moho.

I could go on and on about Moho. I know Iâ€™m forgetting something I wanted to mention.
If you are really interested in more information, check out the features page of the Moho website: http://lostmarble.com/moho/features/index.shtml. Many samples of the features I mentioned, and more, can be found there. You can also find the link to download the free demo.

As you can guess, I really like Moho. It is a great program for the traditional animator who wants to get into using the computer for animation. It has complex features for the more advanced animator, but it is easy enough for beginners. I am considering using it with my students in the upcoming school year.

Two of the movies I made using the tutorial I mentioned are below. Each of these animations took 3-5 minutes to make.