As is my habit, I get my best kicks at the Expo just rambling around the show floor, watching and listening. Here are some of Weeks’ 2006 MacWorld Expo observations.

The little booths way off in the corner are often the most interesting. These are usually operated by small companies that don’t have the scratch for giant pavilions with sound and light displays, voluptuous booth babes, and dozens of 30″ Cinema Displays. One such company is Rogue Amoeba Software, publishers of Audio HiJack and several other audio-related applications. They demoed Airfoil 2 for me. It’s a neat upgrade to the original Airfoil that letâ€™s you stream music to multiple Airport Expresses simultaneously. Music all over the house, streaming from one computer! Look for a MyMac review in the future. 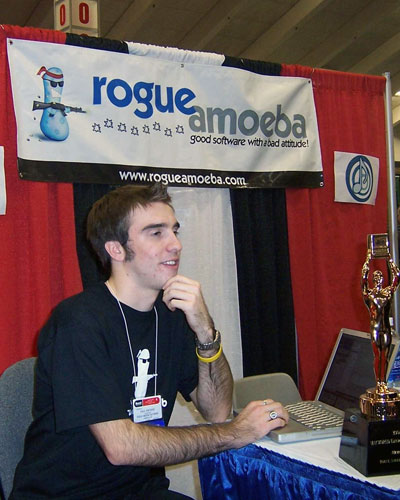 Representatives, especially at the bigger vendors such as Apple or Microsoft, are very wary of people with Media badges, such as myself. I was hanging out at the Apple booth, watching the crowds play with the new Intel-inside iMac. A question popped into my head, so I found a rep who wasn’t working with a customer. I posed my question, and he began to answer. But with not more than 5 words out of his mouth, he noticed my Media Badge, and promptly clammed up tight. “I can’t comment on your question.” I replied that I was not asking as a Media person, but to no avail.

I sidled down the line, and tried again with another Apple employee. No luck; they’re too well trained. Phil Schiller must have put the fear of Jobs into them.

Microsoft was the same way when I asked about if and when Virtual PC would be compatible with the Intel Macs. I must have smelled like a journalist, as I got the now-expected “we can’t comment on unannounced products blah blah blah…”

Attendees like a good deal; the crowd at Other World Computing’s booth was stacked up deeper than airplanes in a holding pattern going into O’Hare on a bad weather day.

People will take anything, as long as they don’t have to pay for it, and it’s not bolted down. I saw more product flyers and spiffs (cheap Expo handouts like logo-marked pens) taken away than ever before. Most of the literature will be read once, if that. Too bad the literature can’t be burned as firewood, since the price of natural gas and heating oil is so high. Conspicuously absent were the free tote bags that were so plentiful last year. It was funny to see who could carry more loose pieces of paper as they waddled down the Expo aisles. 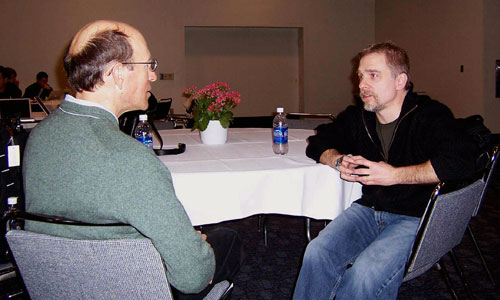 Coming back to the Media room for a short break to get off my feet (As Nemo says elsewhere, comfy shoes are a must) I caught the last bits of a chat between Nemo and master PhotoShop writer Deke McClelland. McClelland is at the top of the PhotoShop heap, so if you need any P’Shop book, make sure to check out his work. 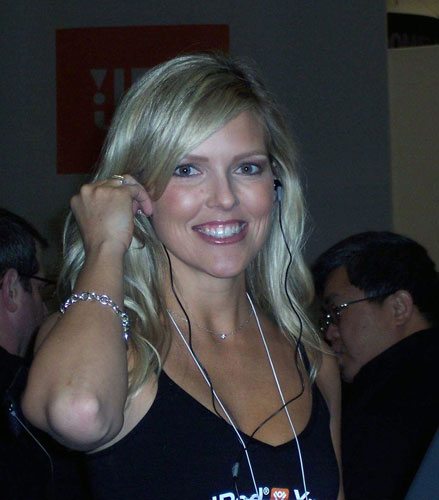