The reason this is called an “everyman’s” review is that I’m less than an expert. In fact, if Photoshop were a car, I’d be the one driving it cross-country in first gear.

I normally use Photoshop for creating Web graphics or sexing up photos – no shifting required, in other words. But Photoshop does way more than that, so much so that without it, most designers would curl up and die. For most of us though, running a full-bore image-editing app is like driving a Ferrari in the back yard. I ought to know: I’ve had access to the software for a long time and still don’t know what all the tools are for – the latest version, Adobe Photoshop CS2, has even more. That said, if you have any kind of visual project in mind and a modicum of talent, there’s hardly anything you can’t do. It may take a while to get rolling, but once you do, you’ll kill for a chance to have your very own copy. See what you can do? 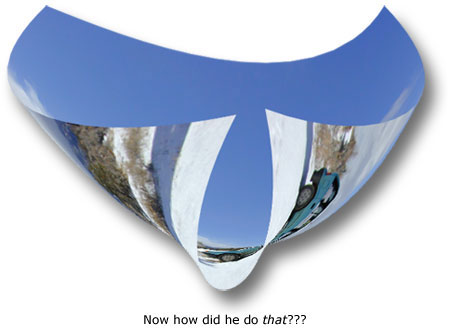 Photoshop CS2 is available alone or as part of the Adobe Creative Suite 2, which includes Adobe Illustrator CS2, Adobe InDesign CS2, Version Cue CS2, Adobe GoLive CS2, and Adobe Acrobat 7.0 Professional in the Premium Edition. (This reviewer was slated to receive the full suite, but “only” the Photoshop component showed up. Color me stupendously grateful regardless, of course, but I won’t be addressing the integration features in this review.)

At $599 for the standalone version, piracy has always been a problem for Adobe, but the company has gone out of its way to save you from yourself by requiring activation — not the same thing as registration — within 30 days of installation. In the past, you could buy the app and install it on all your computers (or any machine for that matter), but the new version only works on the user’s primary and secondary computers. Frankly, the details of the activation process left me confused. According to Adobe’s activation FAQ page (my emphasis):

The activation process supports installation on two machines. The Adobe product license agreement allows the primary user to install the product on a primary computer and also on a home or laptop computer for his or her use, provided that the two copies are not used simultaneously. While the activation process supports installing and activating Adobe software on two machines, the usage of the product on the second computer is restricted to the user who licensed the software. Allowing others to use a second copy of the software violates the product license agreement.

Call me dense, but I have no idea what they mean by not using both copies simultaneously. Shortly before submitting this review, I had Photoshop CS2 running on both of my computers and nothing blew up, nor did anyone unpleasant bust down my door. And apparently my wife isn’t allowed to use the software on the TiBook, according to the above. Frankly, this is absurd, and I wish the company’s lawyers would get a life. But be that as it may, the installation process itself was straightforward, although my 500 MHz TiBook with OS X 10.3 (an oldie but a goodie) required a few hard slaps on the case above the CD-ROM drive before the disk would mount. And the first thing I learned when launching the new app was that as usual, I was coloring outside the lines:

Oops! Despite the warning, the official system requirements listed in the reviewer’s guide only call for a minimum of Mac OS X version 10.2.8, and I haven’t seen any signs of “incorrect” operation yet. True, installing Photoshop on my 400 MHz Blue & White G3 with OS X 10.3 seems to have magically doubled the boot time, but that’s it. If you don’t have 10.3.4, I’d say go for it anyway. For those of you with older versions, there are more than enough useful new features in Photoshop CS2 to justify the $149.99 upgrade cost. A partial rundown includes the following, a few of which I’ll expand upon later:

See what I mean?

As for Adobe Bridge, I probably shouldn’t comment, since I’ve never used the old File Browser [blush]. But here’s what Adobe has to say:

The acclaimed File Browser has evolved into its own application — Adobe Bridge. Now, the two applications work efficiently in parallel — Adobe Bridge building thumbnails while you edit in Photoshop CS2, or Photoshop CS2 batch processing images while you continue to work in Adobe Bridge. Adding essential new features for photographers such as multiple-file Camera Raw processing, enhanced ranking and labeling, and a slideshow mode for quick review of your images, Adobe Bridge also integrates with Illustrator CS2, InDesign CS2 and GoLive CS2, bridging the workflow across the new Creative Suite 2 applications.

I don’t know about File Browser, but Bridge rocks, and I’m converted. Instead of locating a particular image in the Finder using column view, in Bridge I can browse any folder on my hard drive, see all the photos at once (Filmstrip View, below, is a hoot), and open any or all of them in Photoshop with just a click. Just five minutes of playing with this opened my eyes, and when a skeptic like me gets all mushy, people should pay attention. 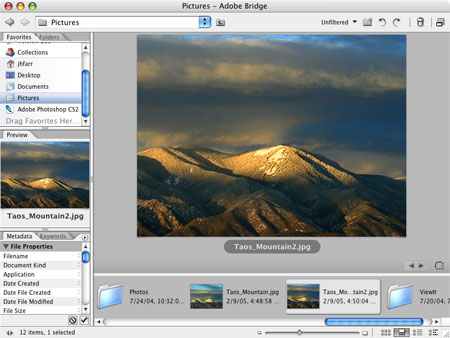 The Vanishing Point filter, completely new to CS2, rates a whole review all by itself. As Adobe explains it, “First you define the perspective in your image by creating perspective grids, then you edit your image normally, and let Vanishing Point take care of adjusting your editing to the defined perspective.” What that means in real terms is that you can do things you never dreamed of without doing hours of work, like pasting “WAY COOL” and “YOW!” into the image below. (How did I do the “Hah!”? Keep reading…) 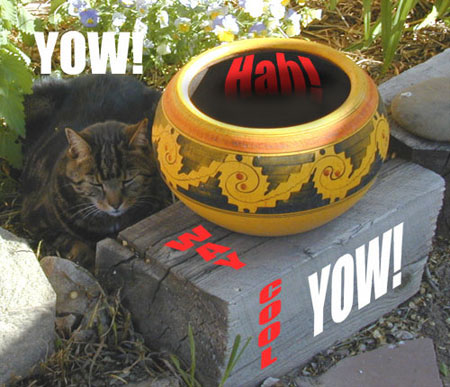 Talk about serious empowerment! I’ve never even tried to do work on this level, but now I can. Once you’ve defined the planes (grids) in your image, you can drag objects into the distance and have them still be in correct perspective. And since the perspective grids are saved inside the image (or on a separate layer if you want), you can return to re-edit whatever’s been placed in them. Edit in perspective? Yup. You can paint directly onto perspective planes with the Stamp Tool, make selections within them, and a whole lot more. This is one extraordinary feature.

Add Image Warp to the mix, and your inner package designer will wake up hollering. Adobe has thoughtfully included a full set of presets for common object shapes, and you can drag control points on the warp grid to customize as desired. Ever wonder how your logo would look on a coffee mug or baseball cap? Image Warp has it covered. This is what I used to place the “Hah!” text inside the Mexican pot, of course, and remember, I don’t know what I’m doing — so power users ought to be able to effect miracles.

There’s a lot more to talk about, but we only have one Web site, and I’m sure my MyMac colleagues will have more to say about Photoshop and the other CS2 applications. Meanwhile, my other picks for things to be thankful for in the CS2 version are the ability to make animated GIFs right inside Photoshop, the Spot Healing Brush for removing unwanted pixels with a single click, multiple layer control, and the WYSIWYG Font Menu. Those of you who import vector graphics from Illustrator ( I don’t ) will be able to start a whole new religion with Smart Objects, and photographers will love the new Camera Raw format editing power.

This is an incredibly powerful and versatile application. If I were Santa Claus or a benevolent deity, I’d make sure every artist and designer with half an ounce of talent had a copy to carry him- or herself to the Promised Land. It really is that good, although I have to say the complexity is overwhelming for beginners. (The Adobe Help application is the best I’ve ever seen, however, and provided tremendous assistance in writing this review.) I’d have no hesitation whatsoever in giving Photoshop CS2 the highest possible rating, except for an intuition that the app has grown to the point where its sheer size and multitude of features, not to mention the price, are bound to limit expansion of the user base. Personally, I’d like to take a digital carving knife to Photoshop and create about half a dozen specialty image editing apps, but that’s not the direction Adobe is going, especially after absorbing Macromedia, and who’s to say I know better than them? I also have no love for the increasingly maddening anti-piracy and copy protection measures employed by the industry, although Adobe’s activation process gave me no trouble. It’s the principle of the thing, and I’m just old-fashioned when it comes to trusting people.

But if you can get yourself a copy (legally!), this is the one to have, hands down. That’s why hesitation aside, there isn’t even a contest. I love it, and it’s already indispensable, even for a first-gear user.