If you spend anytime on online forums about technology (like I do), you’ll find certain constants in anonymous comments in the forum/replies section of most technology websites. Tech Fanboys. Just what is a Tech Fanboy? A Tech Fanboy is an individual that is so in love with a particular piece of hardware or software that they disparage anyone who might have a difference in opinion, usually with lots of off-topic remarks about a person’s parentage or sexual preference.

Typical online battles have included Intel vs. AMD, Gameboy vs. whatever company was foolish enough to make a competing product (this is too long a list to do here) vs. PSP, VHS vs. Beta, Marvel vs. DC (nothing to do with technology, but it’s a battle that’s lasted a long time), and the Granddaddy of all tech battles; Apple vs. Microsoft. What is it about these two companies that inspire normally sane people (open to interpretation of course) to yell, rant, and rave about systems that they don’t use as compared to systems that they do? I mean in some ways, it’s not a fair fight. On the PC side you have upwards of 80-90% of the marketplace with thousands of companies all building Windows compatible computers and on the other you have….Apple. On the PC side you have hundred of thousands of IT pros all dependant on MS to make a few mistakes so that they (as IT pros) can look brilliant and on the other side you have ….Apple. On the Apple side you have ease of use, exceptional technical support, incredible included software (iLife), first class content creation software only available for the Macintosh, and on the other side you have….XP Movie Maker.

As a Mac guy, I’ve certainly spent my fair share of time in forums berating MS users about the virus/X-ware problem of the week or how hard it can be to get something simple done, mostly because on the opposite side of the desk was someone saying that Macs suck because they (pick your poison) have no games, don’t support some obscure graphics card in favor with the “elite” this week, you can’t build your own, too slow, only used by graphics professionals, too expensive, one-button mouse, yadda, yadda, yadda. Most of these are myths or easily dismissed as the nonsense they are. Of course there are games for the Mac. Not as plentiful as on the PC side, but just about every genre is represented. Advanced graphics cards are available, just not as many. You CAN build your own Mac, and many have, I just fail to see the point in doing so. People who build PCs as hobbies or for their own use aren’t saving that much money as compared to buying it retail. They are able to cobble together the exact pieces that they may want for slightly less, but unless you consider the time spent researching and purchasing separately the parts desired and then the additional time used building their wonder tower as being worthless, well who am I to tell you different? Yes, Macs are more expensive, but you get more out of the box than a typical low-budget PC. The Mighty Mouse (still hate that name) finally puts to rest the one-button mouse debate. Of course I’ve used a Logitech scroll-wheel with multiple buttons for years so I never really cared about Apple’s mouse. 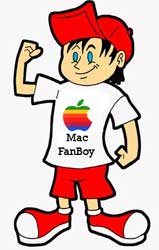 So far in this article I have sounded like a typical Mac-loving Fanboy. My apologies. I can’t help thinking that I’m working on a better platform for what I like to do because frankly who doesn’t? People generally don’t get excited for some piece of gear that they don’t feel is better than what others are using. Human nature. I am trying to change though. It’s taken me almost 45 years (20 of which has been spent mostly in front of Macs) to come to the conclusion that the best tool for the job is the one you feel most comfortable with.

When I write an article for MyMac.com, I mostly use (insert suspenseful music that builds to a shocking crescendo) Microsoft Word. Why do I use Word when there are a plethora of other writing tools available? Because it really is the only cross-platform document creation software that just about anyone can read when I email them. Pages is great but try sending a Pages native document to someone without it on their hard drive or to a Windows user. Another reason is because I have MS Office on both my at home Macs and at my XP terminal at my job. I can start a document at home or at the office, email it myself, and continue writing without having to translate it. Best tool for the job. Not necessarily the greatest tool, but it works with little fuss.

The more astute of you will have noticed by now that I haven’t mentioned the iPod or anything to do with the topic of this feature. I have rambled on for almost a page and a half about Fanboys, tech battles, my personal quest for betterment, and my writing style (such as it is). If you’re still reading, thanks.

The reason for all the hyperbole is that while Apple may not lead in sales or market share for personal computers, there is one tech category that they are currently the undisputed champions; digital music players and the online legal sale of digital music. This makes the typical hardcore PC Fanboy insane. Apple’s market-share with digital music players is almost at MS proportions. Same thing with iTunes. Apple has sold almost 600,000,000 (that’s 600 million for those numerically challenged) songs from their stores around the world. These are amazing numbers considering that they weren’t the first to sell either a digital player or online tunes. So how did they do it? How do they continue to be the market leader when practically every other day another “iPod Killer” is released? Well friends, there is a remarkably simple answer.

You see, it’s not a question of more features or less DRM or a lower price. What most PC Fanboys don’t understand (most Mac Fanboys don’t get this either) is that the market for computers or digital music players or humbucker techno widgets isn’t us. It’s for the great masses out there that just want something that works well. Easily. Without obscure menus or lots of little tiny buttons to switch between a FM radio, music on the hard drive, or a beverage server. They want it to work while they jog, or ride their bikes, or while sitting in the subway, or stuck in traffic. The iPod does all that. They want their music to be easily found, with a way to make a CD with their favorite songs without a hassle. iTunes does that.

It’s the killer combination of iTunes and the iPod that makes it number one throughout most of the world (at least in the parts of the world that has an iTunes music store…sorry Korea). You want an FM radio with your music player? Go buy a Creative Zen or any of the competing products. Most people have voted with their wallets and Apple has the best overall solution.

PC Fanboys might retort that the computing industry has done the same for Microsoft, but it’s not really the same market. When Joe and Sally Average goes to work, what do they see in their 5 X 5 cubicles? A PC running Windows. They were never given the choice of what platform to use. Some IT Pro slapped down a Dell or Gateway and said good luck as they walked away. So when they go shopping for a computer, what are they going to buy? That which is familiar to them. Doesn’t make them bad or stupid, just people without all the information. They might still choose Windows if they did look, but the point is that to them it was a no-brainer.

I guess what amazes me the most about Apple’s success with the iPod and iTunes is that no one else has created something similar. I’m amazed that MS or Napster or Walmart or SOMEBODY hasn’t created the PC equivalent of iTunes. Like most issues there is a simple reason. Greed. In order for something like MSTunes (copyright Guy Serle 2005) to work and actually be a real competitor, it would have to work with all the different music stores and all the different players out there. See the problem yet? If all those online tune shoppes had to compete with each other on a level playing field, someone’s gotta lose. It all comes down to greed. Same thing with the music players. No one is willing to take that first step and actually try and compete with Apple with the same kind of tools. Therefore Apple wins time and time again by just doing one thing and doing it well.

Will the ride last forever? Of course not. Eventually some new bit of amazing tech will supplant the iPod. No one stays number one forever. MS has been there for some time with operating systems but already the cracks are forming. Will it be Apple that takes them down? I would like to think so, but I honestly have no idea.

For Digital Music and players, Apple is the shizzle right now, but everyone is gunning for it. Sooner or later someone will figure out how. That’s the price of success.