No list of classic Macs is complete without reference to the big, blue bubble that saved Apple and the Mac OS. Neale Monks takes a look at the G3 iMac.

A good argument can be made that the original G3 iMac was the computer that saved Apple and the Macintosh operating system. Prior to the release of the iMac, Apple had become a marginal player compared with the likes of Dell and Compaq, with a steadily shrinking market share and no obvious influence on software development or industrial design. While Apple certainly made many good computers, they also made a lot of mediocre ones, especially at the low end. Looking at the good first, the PowerBook 3400 (1997) and then the G3 â€œWall Streetâ€ machines (1998) had both set new standards in mobile computing, consistently trumping anything the Wintel world had to offer. But on the downside, a succession of undistinguished beige boxes didnâ€™t do nearly so well at attracting sales in the important home, small office, and education markets. The budget Power Mac 4400 (1996) for example was as dull and insipid as anything the likes of Elonex or Gateway had turned out. It was obviously cheaply made, offered only fair performance, and unlike the low-end PCs, forced you into buying relatively expensive Mac-only peripherals like printers and keyboards.

This isnâ€™t to say that there wasnâ€™t any innovation coming out of Cupertino. Apple (and its spin-off company Claris) continued to turn out some truly wonderful programs throughout the early and mid 1990s. QuickTime, ClarisWorks, Claris Emailer, FileMaker Pro, and HyperCard were all solid applications that delivered plenty of power with an elegant, easy to use interface that really showed off what the Mac could do. Of course, the problem was that some of these programs also came in Windows versions, so software alone wasnâ€™t enough to keep Apple ahead of the pack. So while Apple continued to do well in certain markets, in particular graphic design and publishing, sales at the low end was poor, and over the long term this boded badly for the company. More often that not, whenever Apple was in the news, it was prefixed by terms like â€œbeleagueredâ€ or â€œailingâ€.

The big news in 1997 was the return of Steve Jobs to the company, at first as an advisor to the then-CEO Gil Amelio, and then with Amelioâ€™s departure a few months later, as acting CEO. Jobs put a young British designer, Jonathan Ives, in charge of the Industrial Design Group at Apple. Both Jobs and Ives shared the same vision for Apple, that they shouldnâ€™t try and supply the market, but create it by designing innovative, lust-worthy products that sell for the same reason as BMWs and Mont Blanc pens — not because people need them, but because they want them.

The G3 iMac was one of the first machines that Apple produced under the new Jobs stewardship. Designed as much to be an attractive and fashionable object as a useful computer, it was brightly coloured and strangely shaped. Even the name of the colour, Bondi blue, evoked something a good deal more exotic that computer shoppers had been used to. Later versions of the G3 iMac followed in this tradition, as with the five â€œfruit flavoursâ€ of the Revision C models.

Some critics panned the iMac as an ill-conceived, underpowered toy that was yet another symbol of where Apple was going wrong. Some argued that it was overpriced for what it was, and that consumers really didnâ€™t care what a computer looked like, so long as it was fast and cheap. Others said that the lack of expansion and upgradeability would be a fatal flaw because it essentially locked into using the iMac as it came without the opportunity to add to improve the machine as the years passed. Perhaps these critics had some fair points, but consumers didnâ€™t seem to care, and the iMac sold phenomenally well. Over 400,000 were sold during the first month alone. Having scored a dramatic home run, Steve Jobs had secured his place at Apple, and the rest, as they say, is history.

Unlike many other classic Macs from the past, modern Mac users will find a great deal about the G3 iMacs to be very familiar. Thereâ€™s no floppy drive, for example, and all peripherals are connected using either USB or FireWire. Kitted out with enough hard drive space and memory, it is even possible to run OS X on a G3 iMac, though performance isnâ€™t all that good. Like all modern Macs, the G3 iMac is designed to connect to the Internet easily, and comes with a 56k modem as well as an Ethernet port. Finally, a built-in optical drive at the very least gives the user access to CDs, and in some machines the optical drive will also read DVDs or burn CDs. So, superficially at least, this is a truly modern Mac. 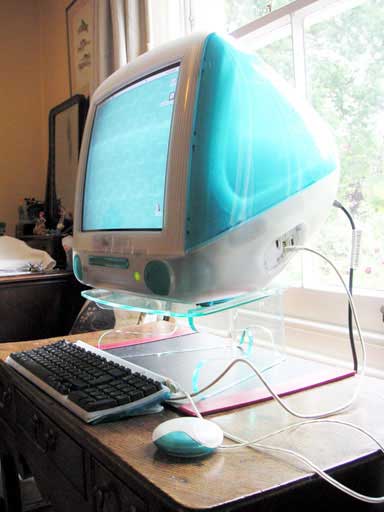 The G3 iMac was in many ways the first â€˜modernâ€™ Macintosh; the lack of a floppy drive and the reliance on USB (and later FireWire) for connecting external devices was revolutionary then, but ubiquitous now.

On the other hand, the styling of the G3 iMac is as much a contrast with the sleek white and aluminium shades favoured by todayâ€™s Macs as it was with the beige boxes of yesteryear. Where modern Macs tend to be slim and based around the infamous â€˜round rectanglesâ€™ so beloved by Steve Jobs, the G3 iMac has its own unique, globular form that doesnâ€™t really fit in with any other Mac produced then or since. The closest thing to a G3 iMac in terms of shape and colour is perhaps an early iBook, and it is perhaps not a surprise that the iBook was marketed as the â€œiMac to goâ€.

Besides shape and colour, texture and translucency play important roles in giving the iMac its unique look and feel. Ventilation grills are not hidden from view but built into the back of the computer, and similarly textured grills cover the loudspeakers at the front. The fascia around the display has a semi-translucency that reveals a candy stripe pattern similar to the horizontal stripes featured in many aspects of OS X; although not distracting, it is enough to make a large and otherwise plain expanse of plastic seem much more interesting than it is. Perhaps the most dramatic use of translucency is with the coloured casing that fits across the top and sides of the computer. Depending on the model (some being more transparent than others) it is possible to see many of the components on the inside of the computer, such as the cathode ray tube. The high-end graphite iMac models had the most transparent casings, essentially replacing the happy and friendly colours of the consumer models with a more serious, working machine image.

The last G3 iMac was dropped from the Apple computer line-up in 2003, and even a fast G3 processor can feel a bit sluggish by todayâ€™s standards. But having said that, the later models featuring processors running at 500 MHz or more are certainly plenty fast enough to run OS X and most modern applications. Classic applications like Photoshop 7, Dreamweaver 4 and Microsoft Office 98 run even better, and in fact there probably isnâ€™t much reason to convert at G3 iMac to OS X unless you really want to.

All the G3 iMacs are built around the same 15-inch monitor capable of resolutions up to 1024 by 769 pixels. There are differences in the number of colours they can show at any one time though, the later models with better graphics cards naturally being the best, but otherwise sitting in front of the screen of any one of them will feel much the same as with another. More variation comes with the mice; the early models had a circular â€œhockey puckâ€ mouse that was generally considered to be less ergonomically efficient than the more traditionally shaped ones (though I know people who actually quite like them).

One problem with the G3 iMacs was the lack of a fast graphics card, so compared with contemporary Power Macs these were poor machines for 3D gaming. But this isnâ€™t to say that these donâ€™t make good family machines: things like Civilisation II, Quake, and Diablo run fine, and indeed any games designed for older, pre-G3 computers, generally work well. Obviously there was some tweaking as the years went by, and the later machines with variations of the 8 and 16 MB ATI Rage Pro graphics cards will certainly handle something like Quake II and Falcon 4 without any problems.

Opening up an iMac

In a word, donâ€™t. Like the compact Macs, thereâ€™s really not much a home user can safely or productively do with these computers. The main motherboard module slides out easily enough, and more memory or a new hard drive can be added without too much fuss, although infuriatingly the instructions for how to add memory are supplied as a PDF file, which obviously cannot be read on the iMac while itâ€™s being upgraded! But beyond these simple changes, the user is best advised to leave repairs to the CRT and the other components inside the main casing to the professionals.

The G3 iMac is a remarkable machine in so many ways, and the fact that numerous Windows PC manufacturers tried in their own ways to create comparable machines probably says all you need to know. The concept of a computer as a fashion accessory was born with the iMac, and forms the bedrock of Appleâ€™s marketing strategy across the board. Apple is now expected to continually innovate not just at the engineering level but at the design level as well, and every new iMac, PowerBook, and iPod is deliberately crafted as much to excite lust among consumers, as they are to deliver good performance at the right price. The G3 iMac used a language of colour, texture, and shape to create something exciting and new, something that created a market for a fashionable computer where before there hadnâ€™t been one. In doing so, it threw Apple a lifeline, buoyed up their sales and market share, and galvanised the legend of Steve Jobs as the man who saved Apple.

The G3 iMacs are covered in much more detail in my e-Book, Buying Used Macs. There youâ€™ll find tables comparing all the different models as well as discussions of the possible upgrades. Enjoy over 170 pages of classic Mac goodness, all for a measly $5.