This week Neale Monks, author of Buying Used Macs, looks at the Macintosh SE, the first of the compact Macs to sport the line-up of serial, ADB, and SCSI ports and probably the best value machine around for anyone wanting to start a classic Mac collection.

The Macintosh SE was a landmark machine in many ways. Although similar in size and shape to the previous compact Macs such as the original Mac 128, the Mac SE has the same colour and styling as the later Macintoshes, and there is an obvious family resemblance to between the Mac SE, first produced in 1987, and something like the first generation of G3 Power Macs released ten years later. Both the Mac SE and the earlier Power Macs used the Apple Desktop Bus (or ADB) interface for input devices such as mice and keyboards, and despite a few styling changes over the years, a mouse from a Mac SE will work fine with the G3 Power Mac, and vice versa. Similarly, the keyboard changed little over time (the most notable changes being the introduction of a numerical keypad and function keys) and the ADB keyboards used by the Mac SE and later Macs are fully interchangeable. Although present on earlier Macs, the SCSI and serial ports on the Mac SE are another point of similarity with later machines, replaced in the late 1990s with FireWire and USB but still among the most popular add-ons to modern Macs and PowerBooks, either through expansion cards or plug-in adapters. 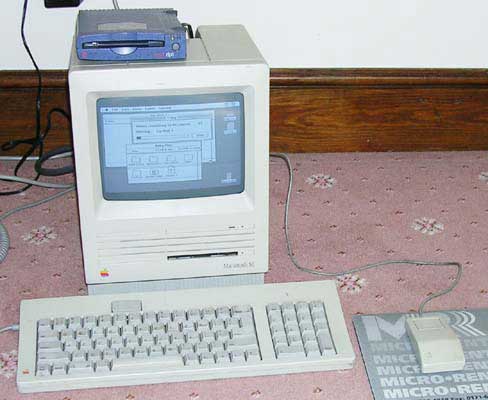 The SE is probably one of the cutest Macs ever made, and a fun toy for any Mac enthusiast.

Really the only differences between a Mac SE and a later, all-in-one Mac like a Performa 5300 are the small monochrome screen and the much slower processor. In most other regards the SE remains a completely familiar machine to anyone who used Macs through t early to mid 1990s, despite its age. While early models didnâ€™t always come with built-in hard drives and â€œSuper-Driveâ€ floppy disk drives, most of the later ones did, and these are by far the nicest ones to use. The Super Drive disk drive is able to read and write to 400k, 800k, and 1.4 MB floppies, whereas the earlier model Mac SEs are limited to 400k and 800k disks only. The two most common configurations of the Mac SE are ones with two non-Super Drive disk drives, and ones with a single Super Drive and a single hard drive, usually something of the order of 20-40 MB in size. Obviously with a built-in hard drive you have the option of installing larger operating systems than can be fitted on a single floppy, and these machines will run most versions of the Mac OS up to Mac OS 7.5. However, with only space for up to 4 MB of RAM, the earlier versions of the OS, in particular Mac OS 7.1, are much more efficient.

The Mac SE is a bit smaller than a G3 iMac, but otherwise has the same basic layout. A 9-inch, 512 by 342 pixel monochrome screen dominates the top half of the machine. Running the Mac OS in black and white can feel a little bit odd to some people, but it can actually be rather fun. Without the distraction of colour, the care that went into designing things like icons and control panels becomes all the more obvious.

As mentioned earlier, the Mac SE comes in a number of configurations as far as mass storage goes. Easily the most convenient and fun to use is the Mac SE SDHD, or â€œSuper Drive – Hard Driveâ€. These tend to be the later model Mac SEs, and as their name suggests come with both a 1.4 MB floppy drive and a hard drive. Alternative versions of the Mac SE include dual Super Drive models, ones with a hard drive and an 800 k floppy disk drive, and ones with two 800 k floppy drives and no internal hard drive. While kits did exist for upgrading SEs without hard drives or Super Drives, these are very difficult to get hold of now, and thereâ€™s no real reason to look for one given how inexpensive these computers are anyway. Regardless of the exact configuration, the hard drive and floppy drives are stacked in the midsection of the computer, one above the other.

Like the G3 iMac, the keyboard and mouse are connected to the main body of the computer with cables, though in this case via the ADB bus rather than USB. Because the Mac SE has two ADB ports, you can connect the mouse to the keyboard, and then the keyboard to the Mac, leaving an ADB port free for other devices such as joysticks, software dongles, drawing pads, and so on. So just like the USB system, ADB allows you to daisy chain devices together quite easily. The one big difference is that ADB is not â€œhot unpluggableâ€, meaning you cannot add or remove ADB devices when the computer is switched on. More often that not, accidentally unplugging an ADB device does no more harm than slow down the movement of the cursor to a crawl until you next reboot, but potentially you can blow the ADB circuitry on the motherboard.

Opening up the Mac SE

The Mac SE is not an easy machine to open and upgrade, and thereâ€™s no question that some parts of the machineâ€™s inner workings can hold a dangerous voltage even when switched off. But having said this, making sure your Mac SE has the full 4 MB or memory is one of the best ways to make it more fun to play with. While System 6 doesnâ€™t need as much RAM and works fine from a floppy disk, things like the absence of aliases and a non-configurable Apple menu makes it feel rather awkward compared with System 7. Provided you have an internal or external hard drive to use with your Mac SE, running System 7 is a lot nicer. However, because of the residual voltage that can hang around the cathode ray tube, the insides of the Mac SE are very dangerous to work around, and my advice here is to either buy a Mac SE that already has 4 MB of RAM, or have a competent computer technician make the upgrade for you. 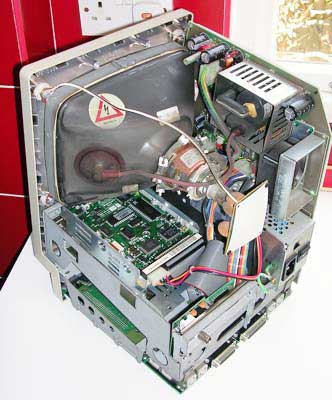 Opening up an SE is potentially dangerous thanks to the tendency of the cathode ray tube to retain high voltages long after the computer is switched off.

One complication is that because of the relatively slow SCSI bus used, you need a â€œslowâ€ hard drive. This isnâ€™t as weird as it sounds, as in actual use you wonâ€™t notice the hard drive slowing down the Mac SE (at least, the SE wonâ€™t be any slower than normal). What it does mean is that when the hard drive is formatted, you need to use a 2:1 interleaving ratio. This will probably be done for you automatically by the Hard Drive Setup program if you are using an Apple-branded or Mac-compatible hard drive, but otherwise youâ€™ll need to use the software that comes with the hard drive to achieve the same thing. Incidentally, the old 100 MB Zip drives with the SCSI interface make perfectly usable external hard drives for these computers, and can be picked up very cheaply.

The other reason to open up a Mac SE is to get at the expansion slot. These computers were the first to feature a slot for third-party upgrades, and while the higher-end Mac II released at the same time had no less than 6 NuBus slots, the Mac SE â€œprocessor direct slotâ€ became a popular way to enhance these (relatively) inexpensive machines. External video cards were popular with users in design studios and publishing houses, while others opted for Ethernet cards to allow faster networking than the built-in Local Talk interface. Even processor upgrades were offered, delivering several times the original performance thanks to cards using Motorola 68020 or 68030 processors. Thereâ€™s no reason to buy any of these upgrades nowadays, though they do turn up on web sites and eBay from time to time, but if you come across an already upgraded Mac SE, a premium of $5-10 may well be worth it. A Mac SE with an Ethernet card is particularly neat because it can access the Internet or be turned into a basic web server. Doing both of these things is a challenge, to be sure, but a fun one and a nice way to spend a few hours on a rainy Sunday afternoon.

Compared with any modern computer, the Mac SE is S-L-O-W slow. However, when using programs designed for this vintage of computer, performance isnâ€™t actually all that bad, and if youâ€™re writing a letter in Word 4, or doing some basic line art in MacDraw, you wonâ€™t find yourself being slowed down by the computer. Other useful programs that run well include PowerPoint 2, HyperCard and ClarisWorks 2.1. Whether or not you would ever use these programs to do useful work is rather more debateable.

Connecting a Mac SE to the Internet via a modem is possible but not really worthwhile, because it only works reliably with modems in the 9,600 to 14,000 baud speed range. Instead, install Mac TCP onto an SE with an Ethernet card and connect to an existing home or office network. Telnet, Eudora 2, and early versions of the web browser Mosaic will work adequately well, but bear in mind that anything that needs a colour screen (for example JPEGs on a web page) arenâ€™t going to work.

When looking for programs to run on the Mac SE, the two main issues are the 8 MHz, Motorola 68000 processor (which was close to being obsolete even when the Mac SE was released) and the small, black and white screen. Many computer programs designed for pre-Power Mac Macs expect a 68030 processor and a 640 by 480 pixel screen capable of running in at least 256 colours.

The Mac SE is a cheap, likeable Mac that can be easily obtained second hand practically anywhere that deals with old computers. Itâ€™s one of the few Macs that has a unique â€œEaster Eggâ€ built into the computer, and with the right sequence of keys (hit the debug key on the side, and then type G 41D89A), you can bring up a slide show made up of photographs of the SE development team. Thanks to its complete set of standard ports, it is an easy machine to add things to, a Zip drive in particular being a very cost effective way to add external storage and share files with other, more modern, computers. All in all, a nice machine with which to start a Classic Mac collection! 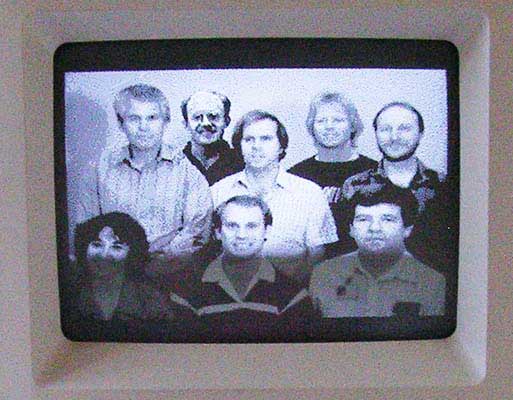 The famous Mac SE secret slide show is a series of bit-mapped image of the Mac SE development team. Only a few other Macs have Easter Eggs as good as this!

If you enjoyed this article, and would like to start collecting old Macs, why not take a look at my book, Buying Used Macs? Itâ€™s available for download right now, and for just $5 youâ€™ll get over 170 pages of information on classic Macs like the SE along with tips on how to spend your money wisely; where to get software for computers of this vintage; and how to exchange files with modern Macs and PowerBooks.