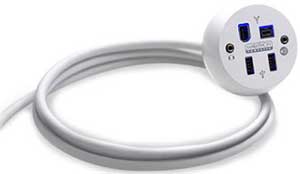 Do you find yourself constantly reaching around the back of your G5 to plug and unplug USB cables? Firewire? Audio in or out? Do you wish there were more ports in front of your computer, or at least extensions to the ports on the back? If so, then Marathon Computerâ€™s new RePorter may be your answer.

The RePorter is a white plastic half-ball that plugs into the ports in the back of your Mac and extends them to the front. Audio-In, Audio-Out, Firewire 400, Firewire 800, and USB 2.0 can all be found here.

One thick cable runs from the back of the RePorter to the back of your computer, at which point the above cables separate and plug into your Mac. You do not have to use all the ports, so if you use external speakers on your Mac, and donâ€™t want to plug them into the RePorter, you donâ€™t have to use that plug. Keep the speaker plugged in the back. But if you plug different speakers or headphones into the back of your Mac often, this will save you some fumbling behind your machine. 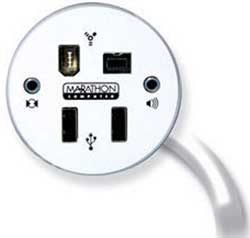 One nice feature is that the RePorter also gives you one extra USB 2.0 port. More, both the two Firewire and two USB ports light up with a soft blue light when plugged in, making finding those ports easy in the dark. Unfortunately, there is no way of turning off the light, but it is dim and not at all distracting.

In real world tests, I found that the RePorter works as advertised. There was no slow down in Firewire transfer speeds when using the RePorter rather than the rear ports on the G5. Audio in and out worked flawlessly, as did USB.

The cable is five-foot, meaning that if your Mac is under your desk, this is a perfect way to get your ports up on your desktop where you need them. And with only one cable running from the RePorter to the Mac, wire clutter on your desktop is cut way down.

There are a few flaws, the largest being that there is no flat spot on the RePorter. This makes the RePorter too easy to roll from side to side. Also, it is made of high-gloss plastic, which on my desk at least caused it to slide around much too easily. You have to use two hands to plug any cable into the RePorter, one to hold it still, one to actually do the plugging or unplugging. And last, there is no way to mount the RePorter. I would be much more inclined to use this product if I could mount it toward the front of the underside of my desk. Also, the RePorter is simply a half ball, no mounting options.

Cons: Not a well thought-out design. Thick cord tends to cause the unit to fall forward on its face.