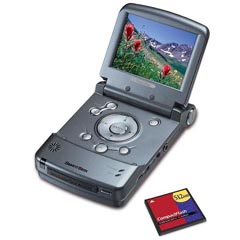 When David Weeks showed me FlashTrax from our friends at SmartDisk, I was immediately struck by its clever and versatile design and functionality. SmartDisk continues to surprise us discriminating computer users with new categories of products that eventually become industry standards. Will FlashTrax rise to the occasion?

Certain reviewers can find ways to criticize FlashTrax. My limited exposure to it demonstrated how it handles an enormous quantity of music files, digital images, and, possibly, movies. If you want full-screen capability, get yourself a PowerBook or iBook, pals, but then try to place one of them in each pocket or purse and admit yourself to a hospital (mental or medical) as quickly as you can.

It’s expensive, but worth the price for media-mogul-road-warriors. Can you put your hands on one for a couple of hours, to see if it’s what you have been dreaming about? Don’t part with so much $$$ on Nemo’s advice, unless you believe all the press releases, such as: http://www.smartdisk.com/Product s/DigitalMultimedia/FlashTrax.asp. You MUST study through FlashTrax’s feature-set at this SmartDisk URL!

The physical unit is well-crafted. It feels rugged enough for constant handling, while still being stylish and WOW-inducing in non-owners. Would Nemo use one if available after the review period? Ubetcha! In fact, I’m glad Weeks had custody of FlashTrax, because I would keep finding ways to use it, making me reluctant to send it back to SmartDisk when requested to do so.

The SmartDisk folks have managed to combine an MP3 player, and a 3.5″ screen that can be used to display photos or videos, all in a 5.63 in X 3.62 1.26 in (143mm X 92mm X 32mm) that weighs 12 oz (340 grams). Don’t have a ruler handy? The FlashTrax is significantly bigger than an iPod, but quite a bit smaller than the average paperback book. It won’t fit in your shirt pocket, but it slips nicely into a pants pocket, and it’s not overly heavy.

Connectivity for Mac users uses USB 1 or 2, but no FireWire. Testing the FlashTrax provided me with a splendid excuse to buy a cheap USB 2 PCI ($19.95 at CompUSA) card for my desktop G4, so I moved lots of photos and music onto the 30 gig FlashTrax hard drive in short order. 80GB and 40GB Hard Drives are available. USB 1 worked equally well, but was don’t expect to move data very quickly.

Taking my usual “damn the instructions, full speed ahead” approach, I tried to figure out how to listen to the sample MP3’s and view the sample photos and videos that come pre-loaded on the unit. 10 frustrating minutes later, I retreated to the PDF manual, and went through the tutorial. The FlashTrax user interface is more complex than the average MP3 player, as it has to handle video and picture display as well. Even so, I found it a bit cumbersome, and frequently had to refer back to the manual. The learning curve was made steeper because, no doubt about it, FlashTrax’s response to button pushes and menu commands is sluggish. I found myself wondering if I had pressed the right button in the right order, as the unit takes some time to respond. I’d often send the commands twice, not being sure if I’d pressed the proper button. The FlashTrax got confused from time to time, and locked up tight more than once. Resetting the unit requires removing the battery for a few seconds, then restarting. Fortunately, I never had data lost or corrupted.

Once I’d learned how to navigate the FlashTrax, I tried some of the sample music, photos, and movies.

The MP3 player was quite good. Audio quality with headphones was good, and having player controls (FWD REV PLAY, etc.) accessible with the cover both open and closed was handy. Once in the MP3 player, the user interface was easy to use.
SmartDisk builds a speaker into the FlashTrax, which strikes me as a waste of space.  “Tinny” is a polite way to describe the speaker audio. Don’t plan on listening without headphones.
Pictures displayed reasonably well on the 3.5′ screen. You can choose between slideshow mode, or manual advance. Again, the slow response of the FlashTrax made for irritating delays when switching between modes, or navigating the menus.
Problems with picture display came when I moved several dozen JPG’s from my Mac to the FlashTrax. The photos refused to display, with the FlashTrax simply showing the filename. I deleted, and then recopied the photos to no avail. The sample photos displayed perfectly, so I rang up Tech Support.
Tech Support was friendly, but it took some experimentation on both our parts to find that the problem stemmed from the fact that I’d added thumbnail icons to the JPG’s using QuickImage (http://www.pixture.com/macosx.php). We found that if I simply copied the raw image files from my Fuji FinePix 601 media card, the photos would display normally. But any photos that had been edited on the Mac would not display. For me, this is a deal-breaker. Not being able to display edited photos severely limits FlashTrax’s usefulness.

Video display was normal. I couldn’t get excited about watching the Lord of the Rings; The Fellowship of the Ring trailer on a 3.5″ screen, but it displayed without stuttering or dropouts. I played one of my own movies equally well.

Conclusion
I found the SmartDisk FlashTrax to be a something of a disappointment. I found the box to be well made, but hobbled by a slow and less-than-intuitive interface. A faster CPU would help considerably. Occasional lockups were frustrating. You can’t display edited photos, which limits flexibility.
If you simply have to be able to view photos and movies on a small portable device, the FlashTrax serves its purpose. But SmartDisk has plenty of room for improvement.