I received the announcement a week ahead of time, along with some other spam I regularly receive. Let me say that it’s a damn good thing I check that junk mail box, just in case. The letter was colorful, and straight to the point, as mail from Apple tends to be.

It told me that the newest Apple Store would open at the Chestnut Hill Mall, on Saturday, June 14th, at ten AM. In all these years of being a Mac fan, I had yet to attend one of their retail store grand openings, so since this mall is only a few miles away from my residence, I simply figured, “Why not?”

Let me explain a few things: I don’t like shopping malls. I don’t like the way people behave in parking lots at shopping malls. I’ve used the expression “Shopping Mall Nation” a few times, and I don’t mean it kindly. The Chestnut Hill Mall is located in Newton Massachusetts. Newton is a very rich, snobbish suburb, and the Chestnut Hill area is among the most snobbish, elitist, and arrogant parts of this city, which is just outside Boston. But, Apple chose to expand their retail operation by putting a new store here, and it’s only a few miles away, so I must say, “Thanks Steve”. (I just hope the rent on this prime retail space is not going to soak all the profit potential. ) So, for this occasion, I broke one of my own personal rules, and went to the mall. (Hey look, they’re my rules, and I can break them, OK? )

The grand opening was at 10 AM, and I arrived at about 9:20 AM. I deliberately parked on the side that was opposite the location of where the Apple store would be. Not too bad an experience, with this part of the lot more than half-empty, at this time. I headed on into the mall entrance, and scooted down to the lower level, near Filene’s. Spotting the Apple store was easy: I just looked for the line, and there it was. The line started at the Apple Store’s doors, and went down the mall, around a corner, and out a mall entrance. Now, here’s the best part of this: I generally don’t like waiting in lines, but on this occasion, I didn’t mind it at all. I’ve never seen people waiting in a line in such good spirits. Lots of people were wearing Apple logo t-shirts, pins, watches, and baseball caps. People were talking, joking, and laughing. A few were talking about their systems, and a few had iBooks open and operating right there in line. The good mood was infectious. I felt like I was at a party. (Now tell me, Does Dell have anything that even comes close to this? I know, I know; The defacto Mac Basher response to that would be “Dell has a gazillion market share, and outsells Apple a gazillion to one!” This must be said with bulging eyes, and throbbing forehead veins. Otherwise, the person saying it cannot officially join the ranks of cartoonish Mac Bashers. Again, does Dell have anything that even comes close to this?)

The line continued to grow, almost getting to the opposite end of the mall. For a second, I was concerned that I might not get one of the coveted free t-shirts, with the location of the store on it. But I roughly counted maybe 300 hundred people between the doors and myself. Apple was going to give away at least 1000 t-shirts on this day, according to the announcement. A quick look behind me revealed that the line was now indeed getting very long, rounding the end of the Mall Structure. I hoped they had more than 1000 t-shirts on hand.

At about 9:55, the line started to move, a lot at first, then in small steps. Mall security guards were watching carefully, to make sure the store didn’t exceed its maximum limit. This is very understandable. Massachusetts has some of the most strict fire codes in the land, and for good reason. (For an explanation of that, just do a search on “Cocoanut Grove”.) As people went in and then left, more people were admitted. I made it into the store at about 10:15.

The store was packed with people, and there was a lot of buying going on. People were busily examining everything, software, iMacs, G4 towers, cameras, iPods, and printers. At the register, I saw a Ti Book being packaged up for a waiting customer. (The man has good taste.) There was an enormous amount of interest in the 17″ Ti books as well. Store employees were very attentive, and I only wandered for a few moments, before being asked if I had any questions, or would like to see something demonstrated. And this store employee really meant it too. It wasn’t that distrusting “Can I help you?” bit, I generally get in other retail stores.

So, what did I purchase? Well, I treated myself to a 15-gig iPod, which was my main purpose for going there, and a copy of the just-released Disk Warrior for OS X. Oh yes, I did score a free t-shirt, complete with the Apple logo, and the words “Chestnut Hill’ just below the logo So for today, I had a happy retail experience.

So, a lot of customers and apple fans, up early on a Saturday morning, waiting to get into a new Apple Store, and enjoying it. People behaving as though they were with a large gathering of old friends. The crowd crossed all lines I could see: Black, white, old, young. Single people, and families with kids. All brought here, out of love for a computer platform and the company that produces it. Not too bad, for a company that we are told time and time again only has a three percent market share. So, I must ask, does anyone actually believe that crap? I mean, something smells bad, and this time, it is not Park Street subway station on a steamy summer day. Here is a company which clearly makes a superior product, and yet, we are told by “well respected Wall Street analysts that “Apple only has a very small market share”, and well, you know the rest. I think it’s time for someone to look at these analysts, and say “The emperor has no clothes.” 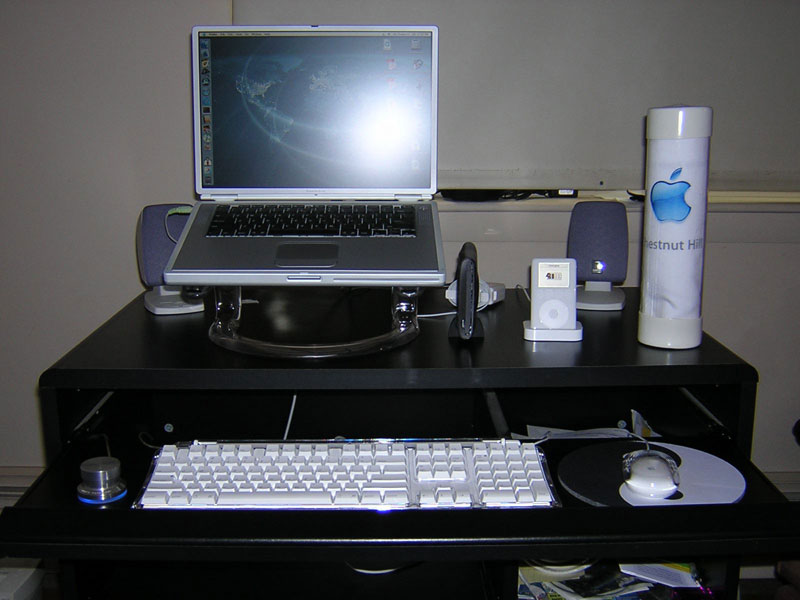 I would like to wish everyone out there the very best Fourth of July Weekend. Have a fun, and safe, time. And if it rains, well, I’ve got a 15-gig iPod to play with, among other things.