Where do I begin to tell the story of how great a 3D application can be? With Cinema 4D XL, that’s where! This bundle of 3D modeling and animation software is packed with more features than your local Blockbuster. And with Release 8, you’ll find that even Hollywood is falling in love with it. Cinema 4D software has been used in such recent films as Harry Potter and the Chamber of Secrets, and DareDevil and by such large filmmakers as Industrial Light and Magic. Yet even as the big boys are using it because of its rock solid stability, ease of use, and lightning fast rendering engine, 3d modeling and animation hobbyists can also have a program that delivers a powerful set of tools at realistic prices. There’s a lot to love.

With the introduction of Cinema 4D Release 8 the makers of the software, Maxon, have begun offering it as a base program ($595 US) with a series of modules that can be purchased separately. This allows new users to purchase only the features that are needed as well as providing room for growth as abilities and or requirements expand. For those in need of all the horsepower they can get their hands on right from the start, Maxon also markets the software in two bundles; C4D XL ($1695 US), and the Cinema 4D Studio Bundle ($2495 US), both at a cost less than the sum of all the modules purchased independently. Prices stated are as of the time of this writing. I suggest visiting the Maxon website for current prices. While you are there, enjoy what I consider to be perhaps the best feature of Cinema 4D, the Maxon website itself. Maxon is on the ball with frequent upgrades, free demo versions, tutorials, texture resources and support.

Mocca ($395 US)
Advanced tools for animation including Pose Mixer, which allows slider control between predefined poses.

Thinking Particles ($395 US)
Particle animation system and new XPresso node editor. Not for the feint of heart but with practice you can create amazing particle effects.

Pyrocluster ($295 US)
Volumetric shaders for particle systems (think smoke and fire). It works with the normal Cinema 4D particle system and Thinking Particles.

Dynamics ($495 US) (available as a stand alone module or with the Studio Bundle)
Friction, gravity, collisions, springs, and wind.

First Impressions
From the moment I installed the software it was love at first sight. The interface is clean, understandable and intuitive. It’s streamlined and customizable. Cinema 4D is a feature laden program capable of advanced rendering and animation tasks yet it’s interface is simple enough for a beginner to jump in and start producing results quickly. That is what I consider to be the Cinema 4D’s strongest feature. It is a very powerful program but there is always more to learn. Like PhotoShop, this is a program that gives you a wealth of capabilities on the surface, but underneath the hood of the simple interface is a full-blown, high octane, turbocharged monster just waiting for you to learn how to use it.

Adaptable
One of the many new features in Release 8 that is the attributes manager. Virtually all of the settings of an object can be adjusted without opening a new window. Another time saver is the ability to create custom interfaces. Cinema 4D recognizes that different tool sets are used for modeling and animation and provides multiple layouts at the touch of a button. Want to model a plane? Use the modeling layout with all the modeling and texture tools. When your model is complete and you want to animate it, switch to the animation layout and the interface changes to include the timeline and function curves. The nice thing is that you are not working in a separate application or a new file but simply calling up a new set of tools to use and maximizing screen space. The layout is customizable to specific tasks and custom layouts can be saved and used at a later time for similar projects. Things just seem to be where you want them when you need them.

Dependable
Looks are skin deep. What about dependability? Cinema 4D is rock solid. I’ve used it for 4 months (with OS 10.2 and OS 10.2.4) and it has never crashed.

Manual Labor
The reference manual is about the only area where I wished for something better. While the individual manuals for each separate module are adequate, and the tutorial manual gives an excellent jump-start into the program, the reference manual was difficult to read because the type is very small and the index seemed incomplete. I found it hard to drill down to the proper location in the manual for various functions. The first time I opened it one section fell out of the binding. Offsetting my problems with the reference manual, Maxon’s website is very in-depth and all features are well documented. Many include QuickTime movie examples.

Growth Factor
Of the many of the things that I like about Cinema 4D R8, I’m pleased to see that it is a product that is alive and growing. During the course of reviewing Cinema 4D R8, Maxon has been busy making it better. Plug-ins are now available for importing Poser files (character modeler) and Ozone (atmospheric plug-in). The Maxon website is updated frequently and there is a growing community of users available online.

Free Version 8.1 Update
Maxon has just released version 8.1 (named Oxygen) with better OpenGL rendering and much awaited support for High Dynamic range Images (HDRI). HDRI images have a depth of 64 bits and are capable of containing a range of colors far higher than an RGB image. HDRI images can be used as a light source that very nearly matches natural light. Included in the free 8.1 upgrade is a plug-in that quickly converts HRDI images for use in Cinema 4D. This feature alone makes Cinema 4D worth the price of admission. Using HDRI images you can make even a simple sphere or cube look photorealistic. Note that the HDRI plug-in requires the Advanced Render Module (part of the XL Bundle). 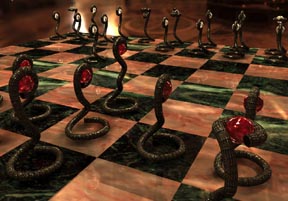 I created the above image using an interpretation of a tutorial on modeling a chess set from the Maxon website and adding HDRI lighting.

Final Thoughts
I love this program. It is intuitive and reliable yet it is also very powerful. It is not likely that you will outgrow it. That is a strong consideration when choosing a 3D software program because the investment in both money and the time learning the program are large. Cinema 4D makes the investment pay dividends very quickly.