If you have a basic grasp of gravity you’re ready to step up and play Marble Blast. Similar to the token eating Marble Madness of my junior high years Marble Blast features, well, a rolling marble. Yep, you roll a marble around and around. Sounds a bit boring but, trust me; this is a finger cramping good time. Marble Blast has one of those “son of a bitch!” gameplay styles where you know exactly what you did wrong and also know what you need to do to correct said mistake. The SOB factor is what makes game play addictive, if you know where you went wrong, heck why not go back and get it right?

Marble Blast isn’t a clone of Marble Madness; this marble can do a bit more. Your marble is powered (I think it uses the segway concept) so it’s not just 9.8m/s^2 downhill action. You scramble your way up hills and, when necessary, get the marble to hop by pressing the space bar. 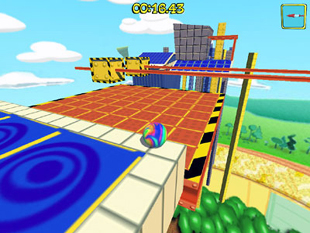 You’ll find powerups scattered along the way. These range from the predictable (time stop) to the very cool (gravity modifier). You use these in an effort to get to the end of the level and while the powerups provide a little bit of extra fun the basic game play is enough to hold your interest. In contrast to ever more complicated games with titles that end in III or VI the simplicity of play and focus on fun of Marble Blast helped me recapture the feeling I had when I first started playing video games.

But there is more to a game than just good game play, there are graphics, sounds, and controls to consider. I am a big fan of cartoons and I thought the cartoony graphics were excellent. The levels are filled with bright colors and sometimes-dizzying perspective. 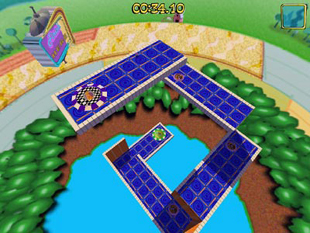 You also get your choice of screen resolutions, a window or full screen option, and a color depth choice. All that adds up to a pretty complete menu of choices in my opinion. The sound is okay, I would’ve have liked a little more marble sound but other than that I can’t complain. The music is jaunty and matches the cartoony environment nicely. The only gripe I really have is the camera/controls. You’ve got four buttons (user assignable, of course) for steering your sphere of fun and those work fine but the four buttons you use to control the camera move your perspective a bit slowly (you can use the mouse for this function and that works plenty quickly). I suspect if you had a gamepad with two joysticks hooked into your computer you would be in Marble Blast heaven. One thing I would have liked to see was a camera mode where the camera automatically stayed behind the motion of the ball, but I suppose moving the camera around is part of the challenge. All in all a very fun and refreshing game.

Marble Blast will set you back 14.95, not much for a game of this caliber and a lot less than I spent in quarters on Marble Madness. So is a finger twitching, non-violent, general audience, 72 level, and jump right in game worth 14.95? I think so, but don’t take my word for it roll right over to garagegames.com, download a demo and decide for yourself.

Note: If you like games you might want to bookmark garagegames.com as long as you’re checking out Marble Blast. I hear that quite a few games will make it to the Mac and I can reveal (pre press release) that ThinkTanks is coming to the Mac.