If you’ve reached the stage in life where you’ve decided to make videos for a living I say congratulations and I hope that beating you take from the assembled members of Metallica isn’t too bad, hopefully nothing worse than a ruptured spleen. Why would your entry into the video-making marketplace coincide with a beat down of epic proportions? It turns out when you drop that John Hartford .mp3 in for background music you’re violating copyright laws. The moment you use copyrighted music you’re essentially stealing from the creator, and those guys want their cash.

Of course you could hire John Williams and have him personally score your project, I am sure the results would be outstanding. If the aforementioned solution seems somewhat on the pricey side you might want to consider another alternative, perhaps going Bobby McFerrin and laying the tracks down yourself, of course the results may be less than palatable. If you’re somewhere between laying down a recording of your sister on the kazoo and outright stealing Smartsound Sonicfire Pro is the answer. While Smartsound Sonicfire Pro is a bit too pricey for iMovie users (try the excellent $49.99 SmartSound Movie Maestro instead) if you’re using Final Cut Pro the $349.99 price tag should seem more than reasonable. There’s a lot to like in Smartsound Sonicfire Pro and it’s not just the music.

Still, this is a program specializing in adding music so rating the music seems to be the logical jumping off point. The Sonicfire marketing plan revolves around selling you the program and then selling you music libraries down the road. I received four sample libraries for my review and found the music to be excellent on each and every one (though my contact at Sonic Desktop said the classic comedy library was “niche”, I loved it). The four libraries I have would probably cover every movie I could ever make and while every track isn’t stellar there are no tracks that would make your project seem cheesy or less than professional. I was actually surprised by how good some of the tunes were, particularly off of The Edge Series. One way to tell is the tracks are going to be adequate or outstanding is by looking at the creator. If the tracks are done by Guy Moon there is every chance they’ll sound better than any royalty free music has a right to sound. (Note to Sonic Desktop: Guy Moon is probably tired by now, give him some time off).

Once you have chosen your libraries you have a choice: pay the extra dough for he 44kHz version or muddle along with a mere 22 kHz. People tell me that 44kHz is broadcast quality so if you’re going to slap your creation up on the tube you probably want to pony up the extra dough. I suppose 22 kHz is reserved for the internet and/or training videos that teach you to lift with your legs and not with your back. In all honestly I listened to both the 22kHz and 44 kHz versions and couldn’t tell much difference. Keep in mind I have an ear completely made of tin owing to a bizarre surfing accident involving a hungry jellyfish and a sand dollar.

Decent tunes do not necessarily translate into a decent product. I wager that with a lot of looking you could find some fairly passable non-copyright infringing stuff. This is where Sonicfire really shines: not only do you get the royalty free tracks you get a super slick way to slide them into your projects. 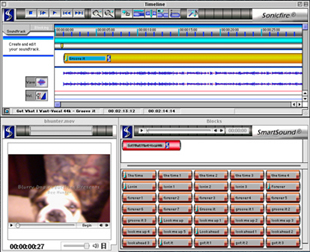 At first glance the screen may seem intimidating, look at all the stuff going on! Once you use the program you’ll find the layout to be easily understandable and not the least bit confusing. All those windows are there for a reason, and the reason is to make the music match the movie in a minimum about of time.

Since the idea is to get music into your movie fast just how fast is Smartsound Sonicfire Pro at performing the assigned tasks? On my machine (G4, 448Mb Ram, OS 9.2) it was very fast. Well, when the program was doing it’s thing it was fast, the rest of the time it was held back by the operator who was overly stimulated. I blame my slowness on the fun factor of Smartsound Sonicfire Pro. With the way the program works it is tempting to try a wide variety of different tracks just to see how they might change the feel of your movie. You’d be surprised at the amount of difference background music can make and how much fun it is to play with.

The trick that makes the whole process fun is the Maestro: 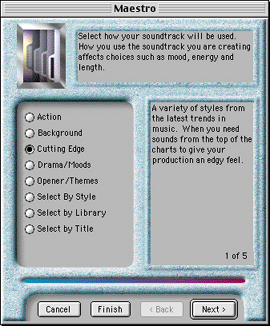 1. Choose a theme
You get your choice here of action, background etc.

2. Select a style.
This choice sets the tone for the soundtrack.

3. Select a source.
You pick just which library you want the music from.

4. Set soundtrack Length
The program pretty much does this for you, but you can customize the time or loop the track.

5. Listen to your options and make final selection.
It’s a long process to describe but a quick process to run through, fairly idiot proof and actually enjoyable.

There are few other features of Smartsound Sonicfire Pro that are worth noting. The first feature that I really appreciated was being able to control the volume of the background music without chopping up the track into smaller bits. The second worthwhile bit of high end groviness was importing music and making that work like it was in one of the libraries purchased from Sonic Desktop. I could explain how Smartsound Sonicfire Pro achieves this effect but it seems to work fairly flawlessly so, trust me, it’s cool. The final bit has nothing to do with the program but rather the libraries of music. Sonic Desktop has a fairly large library of tracks and you would probably go broke buying each and every one. Fortunately you can preview the libraries you’re interested in on the web and buy the libraries you need (a good feeling for anyone who has ever wasted money on an album just to find out later that it was freakin’ awful, do you hear me Love and Rockets?)

To sum up: If you’re a pro video creator you probably already have this program, if not you should get it. If you’re an amateur with a bent for professional level quality you can’t go wrong with Smartsound Sonicfire Pro.