Barbara and I headed south from San Francisco early on a Friday morning, hoping to beat the dense Bay Area traffic. Yes, it worked! Our route took us from Great Highway and Ocean Beach, through the woods on California 35’s Skyline Drive, down Interstate 280 and over San Mateo Bridge via California 92, to infamous Interstate 5. This freeway is known for high speed driving, with the flow approaching 90 mph. Fortunately for our green VW Beetle Bug, 80 mph carried most of the traffic, with a few idiots dodging and weaving from time to time.

I-5 is not known for its scenery, but I found it fascinating. San Francisco Bay’s lower mid-section led to rolling golden hills, which must be used for grazing when the grass is fresh. Then we had hundreds of miles of sprawling agribusiness, specializing in orchards and some field crops. Eventually desert prevailed, but soon we were in the outskirts of Los Angeles, charging up the foothills of Angeles National Forest. Only one traffic jam along the way, due to a rollover accident. Fastest travel time ever for Nemo between California’s two greatest cities.

Leaving the Interstate via Hollywood Freeway, we drove south toward Santa Monica Boulevard. First thing we encountered was an enormous building with its entire windowless north wall painted with an advertisement for Apple’s new iMac. Talk about location impact!

Barbara was navigating toward a new L. A. destination, and I spotted it first: NEMO STREET. This one-block long roadway connects Santa Monica and Doheny Street. Nemo Street has a couple of offices, several small apartment houses, and a private fitness facility called “Gym on Nemo.” We were hoping to obtain a t-shirt or towel with the name and logo for cousin Jim Nemo (get it?), but the establishment has a new name (with its original awning), and no souvenirs of the old one. Nuts. One consolation was spotting a parked silver VW Beetle with California license: JN BUGG.

I took a couple of 35mm photos to prove we actually located Nemo Street, then we headed to the home of friends Kurt and Sheila, who generously put us up (and put up with us) each time we’re in Southern California.

Santa Monica has two simultaneous farmers markets on Saturday morning. The smallest one is on Pico Boulevard, nearest where we were staying, so we went there first. It’s a cute neighborhood-style market in a parking lot, but most of the produce isn’t organic and the peaches were underwhelming. A quick drive took us to the large downtown market on Arizona Avenue, where we tasted every organic peach and nectarine before buying $10 dollars worth of yellow peaches. (That’s a bit over four pounds, at $2.25 per pound, which is reasonable for California organics.)

We stopped for baking provisions at Whole Foods Market on the way back, then ate a quick lunch. Sheila and Barbara went out for the afternoon, and I got down to the business of making two fresh peach pies from scratch, featuring full butter crusts (recipe available upon request).

While the pies were baking, Kurt demonstrated how to use Usenet newsgroups to locate and download binary versions of MP3 music files, as an alternative to Napster’s erratic successors. We discussed the ethics of “borrowing” copyrighted music, and the cash value each of us would place on purchasing any given song via the Internet.

After dinner I gave Kurt an intensive lesson on his new Seagull acoustic-electric guitar, and he showed me web templates for the in-progress writing magazine Sheila is creating: .

SUNDAY AT THE GROVE WITH KURT

Los Angeles has a bad reputation: gangs, earthquakes, police brutality, traffic, smog, younameit. With help from a good tour guide (Kurt in our case), L. A. is a bundle of fun.

Two hours later we arrived at The Grove (upscale shopping center) and The Farmers Market (more a covered tourist market than a produce fair). Parking is in a pay-only structure, but two-hour validation is easy at Barnes & Noble. After admiring a synchronized fountain (nothing special at first glance) we entered holy ground.

California’s newest Apple store is the fourth one I have visited. The two-level retail space makes brilliant use of its modest shopping center locale. Hardware and peripherals are on the ground floor, with software and books upstairs, as are the two Genius Bars.

Sheila and Kurt attempted to purchase a 17″ iMac, but no computers were in stock. Available in two weeks. Ridiculous.

I spent a long time in this terrific Apple Store, doing research for the next phase of my MacLife back in Tucson. If you have not yet taken advantage of an Apple Store within 100 miles, make it a priority. 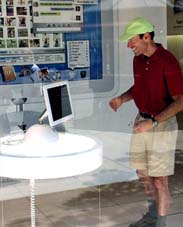 Leaving the store I heard loud opera singing coming from the aforementioned fountain. Jets of water blasted out, dancing in time to the music. Hundreds of spectators listened and watched in awe. Worth a trip to The Grove, even without the Apple Store.

Next stop was L.A.’s downtown indoor Central Market. The building doesn’t look like much from outside, but inside it’s teeming with an ethnic festival of international foods and cultures. Nothing upscale here; Central Market is loud, funky, and watchyourwallet. Parking is scarce, but validation is available if you know where to ask (we didn’t).

Waiting for food to arrive, Barbara was seated at a counter next to a 70-year old man eating avocado and cucumber on tortillas, who announced he has been vegetarian for 40 years. This gentleman looks younger than we do, in our mid-50s.

After a seafood taco lunch of questionable pedigree inside Central Market, Kurt led us on a scenic walking tour through and around gorgeous skyscrapers, sculptures, and urban greenery to L.A.’s restored and remodeled Art Deco Main Library. Wow to the structure, inside and out, and its extensive collection. I studied jazz magazines while Barbara read crafts publications. Kurt selected classical music scores, and Sheila made calls from her cellular phone.

Before leaving California on Monday morning, we stopped at Surfas, the best restaurant supply store we have ever experienced. Whatever you need, these helpful people either carry it in stock or can have it delivered, including an impressive selection of gourmet food products. You want huge slabs of imported chocolate, or fresh tins of saffron? Bingo.

Sitting here in Tucson, among cacti and roadrunners, it’s amazing to think that just a short time ago I was in one of the great urban municipalities in the world, less than 500 miles away, with landmark old and new American architecture, culture, and cuisine. Los Angeles is a vacation destination, given a decent place to stay and somebody (or a good guidebook) to show you around.

SAN FRANCISCO OVER MY SHOULDER

Thinking back to our final period in the Bay Area, a few highlights stand out: