Bejeweled and Alchemy are two games on one CD-ROM. Both are puzzle-type games, but very different from each other.

Bejeweled is a Tetris-type game. But rather than position falling color blocks, your game board is already full of them. Your job is to line up three like colors, after which new blocks will drop down from the top of the board. Sounds easy, I know, but it is not. In fact, after a few levels, the game gets progressively harder. The game ends when you have no three of a kind blocks to line up. The object of each level is to score enough points to finish that level, and move on to the next. 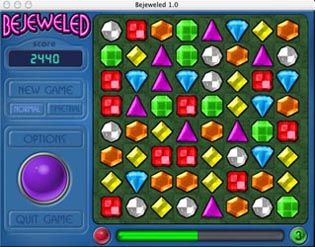 How much do I like this game? A whole bunch. I think it is both a very clever game, and addictive as well. You can play Bejeweled free online, but none of the web-based games are half as polished as this version.

Alchemy is the other half of this game disc. In Alchemy, you start with a large blank playing area, into which you must place your game pieces next to either another piece of the same color, or of the same shape. The object is to convert the entire board into Gold. Once ever square of the board has been converted to gold (wherever you have placed a game piece) you move onto the next level. 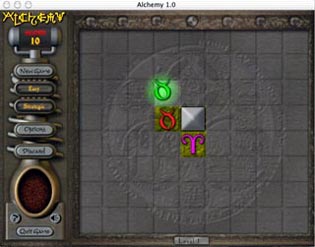 The music in Alchemy is really great. Reminds me of the X-Files, or some soundtrack from an1980Ã•s movie about a mad scientist or super genius. It is really a nice change of pace than the music in most games, and really seems to fit this game well.

Attention to detail is a trait that is not missing from either Bejeweled and Alchemy. Both games are very polished, with an easy learning curve. That is not to say these are simple games to win, just simple games to play. My eight-year-old daughter loves to play these two games, but seems to like the harder Alchemy more.

For US $20, you are actually getting two games. That makes Bejeweled and Alchemy true cost ten bucks a pop. In dollars to game play, this combination rates very, very high.

Loved both game, and I think you will as well.