It is certainly no secret that Macintosh users are customization-crazy. Anything that can tweak or customize a Macintosh computer is something that even the most rigid Mac users will go for in an instant. For years, Macintosh users have benefited from QuicKeys, a handy macro/shortcut utility that allows users to automate repetitive tasks. CE Software has long been dedicated to the Macintosh platform, and stuck with Apple through the “hard years.” Now, with Apple flourishing in the release of a new operating system, CE Software has released QuicKeys X 1.0, which allows Macintosh users to adopt Mac OS X without giving up their favorite utility.

Ease of Use
The best part of QuicKeys X 1.0 is its new editor application, which is dramatically easier to use in comparison to the classic version of QuicKeys. All shortcuts are defined from the “Create” menu, but like many OS X applications such as System Preferences, QuicKeys X allows you to customize its editor window toolbar to place your most often-used functions within a click of the mouse. (see below) 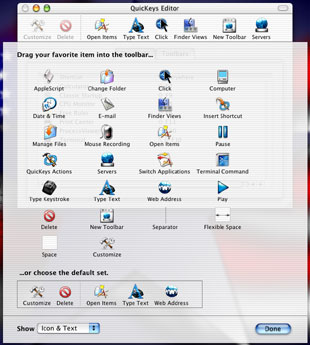 This customization of the QuicKeys X application toolbar should not be confused with the lower part of the interface, which contains two tabs: shortcuts and toolbars. Shortcuts are key sequences that allow you to press one key or a series of keys to perform a function. The toolbars tab contains toolbars that float in every application or just certain applications. This allows you to click shortcuts, rather than press key sequences to perform these repetitive tasks.

One of QuicKeys 5.0’s best features was “sequences,” which are now called “multistep shortcuts.” These multiple-step shortcuts are now controlled by a drawer that appears from the bottom of the new shortcut window. (see below) Unfortunately, CE Software has not been able to enable every function of sequences that QuicKeys 5.0 contained. 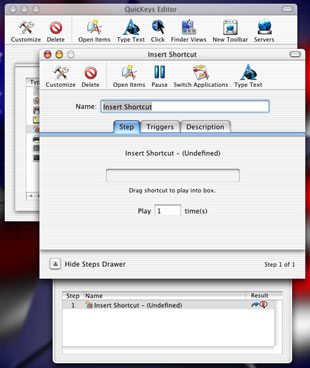 Limitations
Many people criticized QuicKeys 5.0 because it was downright intimidating and hard to master. The sheer amount of things that you could do in QuicKeys 5.0 was daunting, and its editor was often quirky. QuicKeys X’s new editor makes it much easier to create shortcuts, partially due to the fact that the feature set of QuicKeys X is limited compared to version 5.0. QuicKeys X can record and play back mouse actions, but it does not offer the same control over menus and other interface elements that the classic version offered.

Additionally, QuicKeys X’s documentation could be improved. Despite the fact that it uses drawers, sheets, and other OS X-only elements to enhance its ease of use, it can still be confusing at times, and an online help system in Help Viewer, rather than a TextEdit document would be a welcome addition in future versions.

The Summary
This is a busy time for the Macintosh community, as many companies are finally carbonizing or re-writing their applications to run on Mac OS X, thus instituting the “coming-out” party. Many reviewers, including myself, are flooded with requests for reviews of these new products. However, I am an ordinary user, just like everyone else, and I have limited time on my hands. I do not review any utility unless it can benefit my readers, and QuicKeys X 1.0 can definitely do this.

Many reviewers in the Macintosh community have been marking QuicKeys X down for its limited feature set compared to QuicKeys 5.0. The thing that many of these reviewers are missing, however, is that this is NOT QuicKeys 6.0; this is QuicKeys X 1.0 (QuicKeys ten one-dot-oh). It is a 1.0 release, and thus, I am reviewing it with that in mind.

QuicKeys X 1.0 is limited compared to the classic version of QuicKeys, but it is still everything a Mac OS X program should be. The interface redesign is a welcome change, and though its feature set has been trimmed, it is now much easier to learn than the classic version. I do hope CE Software can work with Apple to increase the feature set for future versions. Nevertheless, QuicKeys X 1.0 is a wonderful utility that will benefit almost any Mac OS X user, and it is strongly recommended by MyMac.com. If you want to speed up tasks in Mac OS X, QuicKeys X is the application for you.

Update!
CE Software has just release QuicKeys X 1.5. Version 1.5 includes many new features, such as Windows Shortcuts, Menu Tools, and Menu Clicks Shortcuts, which make it much easier to control and automoate windows and menus. Additionally, version 1.5 adds new Computer Shortcuts, such as “Start Classic,” and “Start Screen Saver,” and an easier-to-use Server Shortcut. All in all, version 1.5 continues to bring QuicKeys X closer to the feature set it once had in the classic Mac OS, and its ease of use continues to make it the best macro utility for Mac OS X. It is strongly recommended, and as I said above, if you want to speed up tasks in Mac OS X, QuicKeys X 1.5 is the application for you.