Let’s face it, though many of us do not want to, all of us are going to have to upgrade to Mac OS X sometime. We are going to have to leave our platinum, extension filled world and plunge into Aqua with all of its UNIX underpinnings. However, where does that leave many of our everyday, indispensable utilities? For utilities that interact with the computer at a very low level, like Timbuktu Pro, that leaves them in the dust. Luckily, companies are hard at work rewriting and modifying their applications to work with this new operating system. I am happy to report that one of those companies is doing a great job: Netopia, with Timbuktu Pro.

The week prior to Mac OS X 10.1’s release was the first time I seriously considered upgrading to OS X. Even though I knew a faster version of OS X was being introduced in a few days, I knew that some of my more vital utilities were going to have to work with OS X, or upgrading was out of the question. Netopia had already released Timbuktu Pro 6.0, so I went ahead and upgraded to 10.0.4, and 10.1 a few days later. I’ve been using OS X with Timbuktu Pro for almost a month now, and its functionality and backwards compatibility is no less than a miracle.

Its Purpose
Timbuktu Pro is high-performance remote control and collaboration software that takes full use of the Internet, but also functions on Local or Wide area networks with ease. Timbuktu Pro supports dial up connections for applications where a high-speed connection is not available. With Timbuktu Pro you can literally control your computer from another computer (known as a host-to-guest connection), which means that you are never more than a few mouse clicks away from having your entire computer at your fingertips–even if you are literally thousands of miles away. 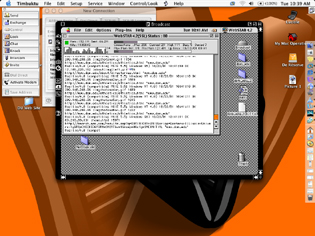 Timbuktu Pro’s remote control feature works best over local area networks where bandwidth is high, and becomes slower as you go down in connection speed. Fortunately, Timbuktu Pro offers you the options of hiding the desktop picture/pattern when you connect, and also connecting in black and white, so even if you are on a modem-to-modem connection, remote control is still useable. What’s more, Timbuktu Pro allows you to exchange files freely, so if you suddenly need a file that you left on your computer at home, you can easily connect and grab it–quickly and efficiently.

Timbuktu Pro also supports sending and receiving of text messages, live chat (like an Instant Message), and voice intercom features, which allow you to collaborate with anyone. In my experience, the voice feature does not work really well, though that can be expected, especially over today’s Internet where bandwidth is at a premium.

Applications
Timbuktu is useful in many situations; Network administrators will love its TCP/IP Scanner, which lists all of the clients on your network that are available for a Timbuktu connection. As a SOHO user, I can remote control and exchange files with my computer when I am at work, thus enabling me to answer e-mail and post columns on the MyMac.com web site during the day. When remote controlling a computer, Timbuktu Pro opens a separate window with your entire desktop environment within it. That window can be in scroll or scale mode, depending on your preference and your like for mouse movement. And you don’t have to worry about remembering that complicated IP address number, because Timbuktu Pro has an IP locator built in, where you can type your e-mail address instead of the IP address to connect to the guest computer.

Multiplatform
Timbuktu Pro’s most useful feature, though, is that it is cross platform. That means you can remote control a windows computer from a Macintosh, and vice-versa. Exchanging files between platforms is seamless also, and Macintosh users will be happy to know that Mac OS 9 computers can easily be controlled from OS X computers, just as OS X machines can be controlled from OS 9 machines. Moreover, Timbuktu Pro is backwards compatible, so you can still connect to machines that have version’s 4 and 5 of Timbuktu, even if you are using version 6.

It’s Aqua!
Timbuktu Pro 6.0 is no quick port to Mac OS X. Netopia has completely re-done Timbuktu to include a full aqua interface, as well as adding some features that OS X users will appreciate. Timbuktu Pro 6.0 is now more secure, because it scrambles the guest-to-host stream, and according to Netopia, screen information is now gathered more efficiently, which speeds up connections. Perhaps the best feature in version 6.0, though, is that you can send a force quit to a Mac OS X computer, thus enhancing the stability of your computer. Unfortunately, a force quit can only be sent if both the host and the guest computers are using version 6.0 and Mac OS X.

Quirks and Quivers
Like many OS X applications, Timbuktu Pro is not without it’s quirks. First and foremost, Timbuktu Pro’s connection menu now resides below the system clock instead of alongside it in your main menu bar. At first I thought that perhaps applications could not use this real estate as they could in Mac OS 9. However, I quickly learned that it is useable because both Stuffit Deluxe and QuicKeys X have menus that reside next to your system clock. This is definitely something that needs to be fixed in future versions.

Update: Mike Silverman of Netopia has informed me that you can move the Timbuktu Pro menu anywhere on your screen (including the menubar) simply by holding down the control key and dragging it. It works!

Timbuktu Pro 6.0 also fails to take full advantage of OS X’s new GUI with its remote control window. The window still appears in a black border, which is fine, however the controls still mirror those of OS 9. Though the window shade icon does minimize the window into the dock, why not use the red, yellow, and green buttons in the left hand corner instead of the “classic” appearance.

Finally, where is AppleTalk support? While I agree that TCP/IP connections are far superior, if OS X supports AppleTalk by option, Timbuktu Pro should also, just as it does in the OS 9 version. If network administrators are going to upgrade to 6.0, they’re going to want an upgrade that does not break their legacy networking.

Requirements/Availability
Timbuktu Pro 6.0 is available immediately for download or boxed version from Netopia’s web site, and a fully functional, time-limited evaluation version is available. Single user copies are $99.95, while twin packs retail for $209.95. If you choose to download the software rather than receiving a boxed version, the price will reduce five dollars for a single user and thirty dollars for a twin pack. Further pricing information and upgrade information is available at Netopia’s online store.

The Summary
Timbuktu Pro 6.0 is an elegant, useful, and downright indispensable utility for network administrators, business professionals, and small office/home office users alike. Its feature set is expansive enough for the IT professional, yet it is easy enough for any home user. And with the rise of cable modems and other forms of broadband connections, its user base is only bound to expand. The icing on the cake, however, is the remarkable job that Netopia has done bringing this utility to Mac OS X.

Unfortunately, as with many programs in the transition to X, Netopia still has a few bugs and quirks to iron out, and that is preventing Timbuktu Pro from getting a perfect rating from MyMac.com. However, the full functionality is in place, and it works unbelievably well. Simply put, Timbuktu Pro is the type of utility that should ship with your Macintosh. It’s that good.