The Pre-owned Macintosh: I Feel Used, and I Like It!

When you drive a new car off the dealer’s lot, it immediately becomes a “used car,” and its resale value declines tremendously. The vehicle is still new, of course, and it should work well for many years before being sold or traded for a modest sum. 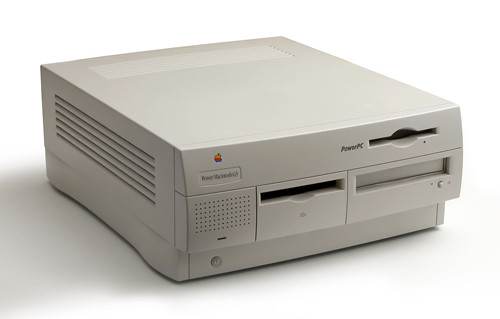 Computers are similar, but different. The same principle applies, but most people are satisfied keeping their systems for a few years, then junking them before buying new computers. More and more users are retaining older computers for their children, personal networks, and other life-extending purposes, and they continue to purchase new equipment for their primary computing usage.

My old buddy Ed insists on buying used cars, figuring they will work most of the time, with tremendous $$$avings. My new friend David always buys the latest computing equipment, then sells it for a modest price when upgrading a few years later.

David is an early adopter, meaning he recently sold his beige G3 to his sister and purchased a 400 MHz G4; he sold his souped-up PowerBook 180 with an ad in the local paper, and now has a G3 PowerBook; and he sold his 17″ Sony monitor to me, and now is using a flat-panel Apple 15″ Studio Display. David just bought a Canon multi-function scanner/copier/printer/fax, and has delivered and installed his old UMAX Astra 1200S scanner in my office for Barbara and me to use for creative and work purposes.

He asked if I would like some enhanced disk storage, meaning adding an internal ultra wide SCSI drive to supplement the 1.2 GB drive inside my “blazing fast” 7200/120, which I had purchased used last summer. I jumped at the offer.

Last week David showed up with the scanner and SCSI hardware. Here is what we did, in sequence:

A. Shut everything down, then removed the cover from the 7200 CPU.

B. Inserted an Adaptec 2940 ultra wide SCSI card into one of the three empty PCI slots.

D. Started up the computer to make sure everything worked.

E. Closed the box and got ready to install the scanner software.

(The ribbon connector from the PCI card to the IBM drive lay compressed between a metal ridge and the plastic PCI-slot cover, making it tricky to replace the CPU case.)

F. Cleaned up the software on David’s old IBM disk, and, after changing it to be my Startup Disk, restarted the 7200.

G. Nothing happened. The “new” IBM drive wouldn’t spin or boot up the computer.

H. We repeated the entire process twice, with identical results. David became frustrated, because he had been having some compatibility problems between the SCSI equipment and his new G4, but he thought everything should work with my 7200.

I. Removed the 4GB drive and inserted a Western Digital 2GB internal disk.

J. Everything worked great with the case open, but not with it shut.

K. We pried open the hinge flanges for the large plastic PCI compartment cover and removed the piece. This time all went well, now that the ribbon power supply cord from card to drive was not being compressed. Was the first drive faulty, or did the pressure on the ribbon cord cause all the problems?

L. Running out of time, David installed and tested the scanner software, which appears to work as promised.

I’m in the midst of configuring my “new” 2GB Western Digital internal drive as my startup disk, and the original smaller 1.2 GB drive will become my second unit. I will try to revitalize the IBM 4GB drive and use it as an external, after purchasing a case and setting the SCSI chain correctly. David is a speed-demon, and insists the ultra wide SCSI disks will prove to be noticeably faster than the standard SCSI drive.

So far $75 is the magic number, which is what David has charged me for each piece of equipment: monitor, scanner, and ultra wide card + drive. Not a bad deal.

Did anyone just mutter I’m ready for USB? I heard a whisper in the back of the room!

I intend to pursue the acquisition of used equipment, knowing that there will be some rough patches along the road to substantial $$$avings. Does anybody have a beige G3 for sale? How about $75?

Last Friday night I was out at my monthly low-stakes poker game. For the first time I actually won some money, and was modestly proud of the $26 bulge in my pocket. I was full of energy when I arrived home. Inspiration came to me: tonight was the night!

Instead of boasting of my poker prowess, I headed straight for the office, where I tossed file after file, pile after pile of “pending” and “important” stacks of paper into our family dumpster. Long after midnight I carried out rubbish cans bulging with old personal, professional, financial, and computer paperwork.

Because I’m not brainy, rich, or famous, no Pulitzer-winning journalist will ever plunder my memoirs for a bestselling biography. When I go, my archives go with me. Period. Barbara has often told me “John, if I’m around after you are dead, I’m not going to bother sorting through all your stuff. Out it will all go.”

Filing is my weakest trait. I am well-organized mentally both at work and at home, but I tend to let papers, tools, and assorted items sit around longer than I should. I inherited this attribute from my dear father, whose basement is somewhat organized, but demonstrates the “everything is everywhere” principle. Trust me: I come by it honestly.

By noon on Saturday I had tossed out tons more. Barbara had generously helped me create a filing system for the tiny percentage of items worth keeping. My motto had become IF I WON’T BE USING OR NEEDING IT DURING THE NEXT YEAR, OUT IT GOES.

As the mountain of trash grew, like the narrator in the excellent recent movie “American Beauty” (for MATURE audiences only) I saw my entire life parading before me in pictures, words, and music. But unlike that character in the film, I plan to have 30-50 years more living to do, bringing me to age 80-100.

The most difficult part came after lunch, when I threw out many hundreds of printed personal email letters from family and friends. As Barbara says, “I thought now we’re using computers we don’t need to have letters printed out.” Yes, I realize, but do the contents of stored email messages have the same earthly presence as cherished printed text? No, I understood, as the dumpster filled.

I would like to say the rest was easy, but it wasn’t. I would like to add I felt unburdened with the removal of a lifetime of clutter, but I can’t. My brain IS well-organized, even if my office was not, and the loss of personal correspondence left a significant hollow cavity in my emotional filing cabinet.

I had surprisingly little computer debris to cast off, because I do sort through the floppies, CDs, manuals, and printouts on a regular basis. I did grimace as I heaved several files containing my new user Performa and AOL instructions, plus “guru” advice from the generous epals who helped me get started years ago.

Hey! I also located a box of demo and promotional CDs, including some of the famous original OS8 demo and Power Computing “Fighting Back for the Mac” disks, plus a dozen AOL floppies and CDs, going back to “Five Free Hours!” Does anyone want them? Let me know right away, and I mean really quickly.

What About Your Hard Disk, Nemo?

By the time you read this Nemo Memo the cupboard will be bare, more or less. I’ll do even better in future, and continue to toss out additional stuff on a routine basis, while not bringing more into the office.

My “virtual life,” as I have heard the computer experience called, is neat and infinitely expandable. An hour each week is sufficient to maintain organization and archive/backup my personal and work files. With my Zip disk archive, the physical and mental aspects of digital data management are well under control here in Nemoland. Are yours?

What comes next? Time will tell if I will be able to maintain my pledge. Wish me luck.

Normally at this point I would launch into a words-for-the-wise lecture on how to learn from my experience. Instead, may I learn from you, loyal readers?

How do you manage the paper clutter, how do you deal with expanding Macintosh data, and how do you contend with the physical detritus: hardware, software, manuals, CDs, floppies, removable drives and disks, and so much more I had better stop right now!

Thanks, friends, and happy new year.