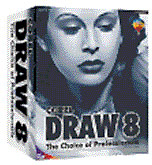 About a month ago, I got an email from Tim, My Mac’s publisher, asking me if I wanted to give Corel Draw 8 a whirl, and if I wanted to then write a review of it. I was more than happy to do so as I’m always out to try new graphics applications, having already built up some major prejudices for and against some of the “industry standard” art programs now available.

The prejudices against were towards Adobe’s painfully awkward Illustrator, which I continually find to be a mind-numbing experience to work with, and even worse, Macromedia’s blunder of an “art” program, Freehand (which I can’t believe is actually a Mac application, as it is devoid of the staples that make a Mac a Mac, e.g., a logical interface, ease of use, a rational toolbox, etc.).

So here is Corel Draw 8. The history of Corel is as such: It was first introduced in 1989 as a Windows-only graphics application. It was first known as simply an illustration program, but after several years of aggressive development, it established itself as the PC design world’s standard graphics application, transforming into an entire graphics suite. Apparently, at their peak Corel held an 85% market share of the Windows graphics community.

Now that’s all fine and dandy, but everyone knows that pretty much 99% of all design work done professionally is done on a Mac OS, and THAT is the truth of it all (in fact, in my 8 years in the business, I have never known a single designer who even owned a Windows machine!). Hence, Corel released Draw 8 for the Power Macintosh, years after Photoshop, Illustrator, Quark, Freehand, and PageMaker had established themselves.

I was a little skeptical at first. For one thing, I hate illustration applications, preferring to do all my line work by hand. Secondly, this application was originally created for a Windows world, so I wondered how awkward the GUI would be, and how well the code was written (e.g., try Painter 5.0. That application had to be a rewrite of a Windows application. You never used a more sluggish and buggy application). And finally, my only use for Corel would be limited, as I usually do all my art and design work in Photoshop and Quark.

So why bother trying it? Well, I work during the day as a designer for J. Weston Walch here in Portland, ME. Walch is a big name in the small world of educational book publishers, and I get to work all day doing art and design work for their covers and for the interiors of their publications. Being an educational publisher, you kind of want the books to scream “inspirational”, “interesting”, and “surprising.” Design-wise, I’ve been forced to try new things with the artwork, and I’m always looking for different ways to spruce things up.

One of the first gimmicks I started incorporating in my design work for Walch was something I call “Type on Curve”, or better said: You draw a curvy, fun line using Illustrator’s or Freehand’s bezier drawing tools, and attach type to it, so the type then bounces along the line.

I also have tried this other gimmick: I was designing the cover for a book titled “Amusement Park Physics”, of which I picked out a wicked cool photo for the cover of a cart wiping around a bend on a roller coaster. I wanted the type to follow the curve of the bend, and I wanted it to have a 3-D, colorful look of almost plastic.

Now, I tried doing both these things in Quark 4.03, however Quark can only at this point do “Type on Curve”, and it is BUGGY. Having Freehand at work, I created the type within it rather easily, and then dragged it into Quark. I decided to try doing the same thing in Corel, to see how it handled this same simple task.

But beyond those three saved steps the possibilities of manipulation of the type from there was what blew me away. With your type selected, click on the fill button, then on any color in your palette, and BAMâ€”the type turns that color. Hold down option, hit another color, and your type is outlined in THAT color! Or you can click on the gradient button, pick two colors and an angle for which to blend, and it will make a blend of those 2 colors! Then skew the type, twist it, flip it… and you end up with some pretty funky type!

These are all (pretty much) things you can do in Freehand and Illustrator, however the difference is that in Freehand and Illustrator, you have to convert your type to outlines to be able to color it and outline it, warp it, etc… and say you do all these manipulations and after about 20 minutes of getting it just perfect, you realize you spelled “Physics” wrong. Then you start again from scratch, trying to remember how the heck you did it the first time!

In Draw 8, you can manipulate the hell out of your text, but it remains TEXT. Say it’s all 3-D and colorful and funky, and you notice you spelled a word wrong… well,then you just fix it the same way you would in any word processing program. Or you decide you like the effects you made, but you want the font to be Futura Book as opposed to Gill Sans Ext. B. Cond. Again, you just switch it like in any word processor, and Draw 8 applies all those same manipulations to your new font!

Now those are all BASIC things you can do with an illustration program. What most people doing computer generated art are into is what I call “Intensive- Amazing, Bezier Wire-Framed, Super-Blended, Super-Realistic Art,” an example of which is on the cover of Draw 8, an illustration of actress Hedy Lamarr.

Now that drawing of Ms Lamarr is pretty incredible, but that type of art is well beyond anything I am inspired to do or capable of doing or patient enough to do. The basic core of how a piece like that is made is simple: (hah!) It’s basically a huge skeleton of meticulously placed blended shapes. Hit the “Wire Frame” preview in Draw 8, and your eyes will bleed amongst the sea of bezier lines criss-crossing across your screen. Hit the “Enhanced” view, and Draw adds all the blends you applied to those same wire frames, thus creating a perfectly rendered 3-D image.

Now I don’t have nearly enough time to do anything like that (although I
greatly appreciate that type of art). Instead, I found I could do tons of fun and cartoony things using simply the Circle tool and playing with bezier points to warp those circle to ameba like shapes, then adding blends to those said shapes.

For instance, the basic structure of the cover is like this:

1. I created a circle for the head. I added a blend from green to no color using the Interactive Transparency tool.

2. From there, I warped in the corners of the circle to get it to a shape I liked. That was my base “Skull.”

3. Then I added the features of the face, creating the mug of the alien on this month’s cover.

What I liked about Corel Draw 8:

1. It’s very easy to use. In fact, I think it blows the doors off Illustrator and Freehand. I will only use Corel Draw from here on out for text manipulations and bezier drawing.

2. The color palettes are awesome: it seems like every palette you can think of is built-in, including both a Netscape Navigator AND an Internet Explorer web palette!

5. Incredible price for what you get (It’s ALMOST like getting Photoshop, Illustrator, Page Mill, and Quark in one application suite!)*

6. It runs very fast on my G3, with no instances of any sluggishness.

A few things I didn’t like about Corel Draw 8:

1. First and foremost, Corel Draw 8 had enormous memory requirements. The recommended RAM you should have allotted to Draw was 64 megs (!!), running on a Power Mac with OS 8.1 or higher. That should turn a few of you off. That means that for it to run optimally, you should have 96 megs of RAM installed, as OS 8.1 can hog as high as 32 megs of RAM alone! Its minimum requirements are 7.6.1 with 32 megs of RAM, again which seems painfully high.

3. Although I appreciated not having to change text to outlines to manipulate it, in some cases I WANT to be able to!

4. Although Corel made huge strides to match the GUI of Illustrator and Photoshop, it was only 80% there, and many tools react somewhat differently than in these two longtime industry favorites, making for a few “Now why the heck is that tool doing THAT” instances.

5. I hate multiple undos. You’ll want to make sure to adjust that under Preferences before you give Draw 8 a go.

6. Selecting multiple items that lay on top of each other is a royal pain. I found the same problem with Freehand.

Final thought: If you want to get into the field of graphic design, but don’t know where to start and have limited funds, go buy yourself an iMac with a ton of RAM and Corel Draw 8. You’ll save a boat load of money versus buying a straight up G3 with Illustrator, Photoshop, and Quark, and will be able to do everything the pros do. Later on, you can buy a more “muscular” CPU. For your money’s worth, though, Corel Draw 8 is a fantastic bargain with phenomenal capabilities. I don’t think you would need much more than Corel Draw 8 to do it all!

Corel Photo Paint 8:
I have a brief synopsis of Photo Paint 8, Corel’s attempt to steal the thunder from Photoshop. At first I believed Corel did a really fantastic job creating a basic mimic of Photoshop. Photo Paint 8 pretty much matches the features of Photoshop with few exceptions. It seemed just as easy to use as Photoshop, and can do most of the fun and funky things good ol’ Photoshop can do. The night I tried it out, I went into that exploratory mode I did when I first tried out Photoshop where I kicked back with a beer and just tried stuff out for a few hours. Just exploring.

Now I’ve tried to do those things with Photo Paint 8 that I do with Photoshop, mainly, I scan in my line art, bring it into Photo Paint, and drop in color. Soon I became surprised at how confusing Photo Paint was. The tools reacted so “foreign”!

Man, why couldn’t I easily select colors for the Paint bucket without having to draw up an overloaded palette, or without having to hold down the Shift key? Where’s the CYMK Palette?! Why was it that I had to use the Magic Wand tool to select an area to pour the color into? In Photoshop, I would just select the Paint bucket, select a color, and pour. In Photo Paint, I had to select the spaces I wanted to color with the Magic Wand, select the Paint bucket, hold down shift to pick out a color, then pour the color into each separate selected area, then reselect the magic wand to click off of those selections. That’s madness!

The interface bugged the heck out of me, as well. Basically, your entire screen is wrapped with those Windows-type tool bars that seem to want to latch onto the sides of your screen if you move ’em around. Why do software developers continue to do this with their GUIs?

Anyway, I think I’ll stick with Photoshop. I dig it. It does it the way I like it. I think Photo Paint 8 is an excellent first-timer paint program that does a ton of cool stuff. I just don’t care for its hassles.