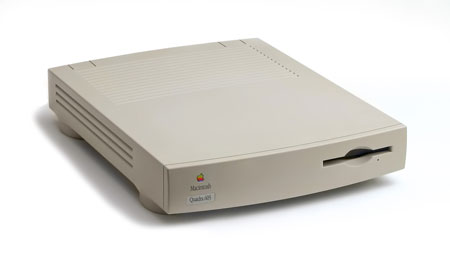 Every morning Maureen, a friend and neighbor, calls Barbara, my wife, to schedule the day’s walk through the neighborhood. One morning several weeks ago Maureen asked to speak to me, with more than a little panic in her voice:

“John, I have a Mac question.”

“Sure, Maureen. Is it serious? You don’t sound happy.”

“Well, I’m not sure. My son, Ned, was downloading some game software for his Nintendo from AOL last night, and I can’t get the Mac to work this morning.”

“Okay. Try this, Maureen, then call me back. First, run Norton from your NDD Startup floppy, and fix everything twice. Then run Disk First Aid, and rebuild your Desktop with TechTool. Understand?”

“John, it won’t work. I can’t even get Norton to fix my hard drive. Can you possibly come over when you have a little time?”

We had two weeks of solid visitors from the frozen North, so it was several days later when I paid a house call to Maureen’s Q605. Her hard disk was the “sickest” one I have ever seen in my limited experience as a Mac triage nurse. After trying every fixit in my backpack, I finally surrendered and declared the patient dead.

I guessed that for a few hundred dollars, Maureen could have a large, brand new hard drive. She was not very enthusiastic, and explained that she was considering purchasing a new Macintosh soon, but not quite this soon. Under the circumstances soon equals immediately, so we dug into her pile of mail order Mac catalogs.

We called MacConnection, and learned that “refurbished” new G3 computers were available, as were “refurbs” from the 6500 series, all at greatly reduced prices. Given her non-budget, Maureen decided on a complete-system refurb 6500/250/Home, plus a 15AV Apple monitor, with the 4-year on-site extended warranty, all for just over $2,000 U.S. I approved completely. (Note: Apple has subsequently lowered the price on brand-new 6500/250 Macs, to Maureen’s refurb-cost. Such is life, right?)

Two afternoons later, we cheerfully set up her new system (quick and easy) and booted up. The Mac came with OS 8.0, and a moderate quantity of commercial software, but some things were absent. I patiently loaded and installed all the missing items from her Restore CD, and called it a day. It appears that when a Mac is refurbished, the hard drive is initialized and only partially restored. Not a big deal, so we thought.

Next morning, back to help Maureen log into America Online, I got the dreaded blinking question mark upon startup. Having experienced this affliction once previously, I took a deep breath, initialized her hard disk using the Drive Setup 1.3.1 floppy I had brought from home, and began from scratch, double-checking that Drive Setup 1.3.1 was itself installed. All software installation proceeded smoothly, until we attempted to log into AOL.

There was no modem signal or connection activity whatsoever, in spite of the built-in 56k modem. I was totally stumped, so we called Tech Support at MacConnection and spoke with Ann.

She was amazing! Systematically, she went through every possible cause for the missing modem signal, including suggesting I crack open the mighty 6500 case to see if the modem card was seated properly (I declined), until I had to leave after nearly an hour. Exasperated, I handed the phone to Maureen, and feebly grunted “Good luck, and call me when you get off the phone.”

“John, we did it, and I already logged into AOL. That Ann was brilliant.”

“What did she come up with after I left?”

“Remember when you had to erase my hard drive, and install all that software all over again? Well, the Apple Teleport, or Telecom, or whatever it’s called, a part of OS 8, needs to be installed separately. She walked me through it, and just like that, I had the modem listed both in my Control Panels and in the AOL Setup screen. Took about a minute.”

“Did you thank her profusely?”

“And mine too, since I felt totally responsible for your system not working out of the box.”

Maureen keeps writing me “Thank You” messages from her AOL email, and I’m headed back to her house next week to help her configure her bundled fax software. Wish us luck!

Under similar situations, how would you have responded? What were the obvious clues Maureen and I (and Ann) missed from the beginning? In my opinion, the moral of the story is to be patient and thorough, always purchase the supplementary warranty, and call Tech Support until your Mac is running perfectly again. Amen.
#2: A Better Mousepad

For two years, I have been reading about the 3M Precise Mousing Surface, a high-tech mousepad. Whenever I called MacWarehouse or MacConnection, or our local retailers MacStuff or Egghead, no one was ever able to help me purchase one.

I have owned and used six different types of mousepads during the past four years, all with some success. My favorite was the slick, grey Apple mousepad offered free with my computer.

Tim, our My Mac Magazine publisher, recently reviewed the WebPad mousepad, and gave it high marks. I started thinking about the 3M/PMS once again.

MacConnection finally had the item listed, so I ordered two of them. I ordered two so I could give Maureen one of them as a “new baby” present for her 6500. The total cost, with shipping, was around $30. Expensive, you say? Yes, indeed, but is this 3M/PMS worth it?

â€¢dark blue and black, in a wavy abstract pattern

â€¢totally flat and extremely thin and flexible3M describes the patented microstructured surface as “a network composed of peaks and valleys specifically designed to make your mouse move and perform better. This surface is specially engineered to provide the optimal coefficient of friction.”Does it work? Yes, and I can RECOMMEND it. If you’re tired of your mouse slipping around your present mouse pad, you won’t be disappointed with the 3M Precise Mousing Surface. Like the Macintosh itself, it’s worth a premium price.Now, as 3M proclaims, “Thin is in. Foam is out.” (Speaking personally, I could add: thin is in, and hair is out.)By the way, why am I still using a mouse and not a trackball? Well, I find that my hand is more *active* when mousing than when rolling, which I hope will keep me from getting any form of repetitive stress injury or carpal tunnel syndrome. Do you have any thoughts to add on this crucial subject?
#3: The Latest and Greatest Mac OS

Every month, before the large general meeting of TMUG (Tucson Macintosh Users Group), we have a one-hour informal gathering of 12-20 experienced users. Last month, while discussing such diverse topics as extension conflicts, AOL connection speeds, and printer drivers, I took an informal survey of members:

A: Over half the members are running 7.x. (I was surprised.)

The reason is consistently straightforward. These sensible TMUGgers have learned not to embrace new software or hardware developments “out of the starting gate.” Instead, many of us wait patiently for bug fixes and reports from users with ants in their pants.

The news is generally good regarding both OS 8.x and the new G3 machines. If your computer system is humming along nicely, then take your time with major upgrades and purchases. Or, as I often state, *you will know* when it’s time for that new OS and CPU.

Here at My Mac Magazine, the staff usually always communicates with one another via email, phoning only occasionally. Recently, we have begun to use AOL’s Instant Message (AIM) and Buddy Lists, and I can personally recommend them.

If you’re an AOL subscriber, go to Keyword: Buddy, and set up your own list of friends, family, or co-workers. I’m not going to write down all the steps, because in practice the whole scheme is very easy. You can always get help from AOL’s various Help features, or any book covering America Online.

What makes AIM especially worthwhile now is a stand-alone freeware application allowing *non-AOL subscribers* to communicate immediately with one another or with AOL members via Instant Messages! You can download this small application America Online at http://www.aol.com
, ‘Nuff said on this topic, so give it a whirl.

And as a bonus, here is a genuine Web browser tip from your faithful correspondent: