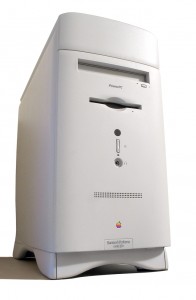 Performas have always been stereotyped as low-end computers. Graphics professionals and other business people have said that “the PowerPC 603e is not powerful enough to handle sophisticated operations.” And some people are saying that “Apple’s case designs are not original. It is the same type of box every time.” Apple shoved all of those criticisms aside when they designed the 6400. Sporting a totally new tower case design, a 180 or 200-MHz 603e processor, and more speed and multimedia than any home user can imagine, the 6400 is ready to give mid-range Power Macs a run for their money.

The 6400 comes with a keyboard and mouse, but does not come with a monitor. Not bundling a monitor is good in some aspects, as it allows users to choose what kind/size of monitor they want, but on the other hand, it discourages any of those buyers that want an all-in-one package. This is a major factor when purchasing this computer.

Easy Expansion
When it comes to expanding the hardware on a normal tower computer, most users would back off. Not with the 6400! With a logic board that simply pulls out of its slot, a SCSI ready expansion bay, two 7-inch PCI slots, and 16MB of RAM expandable to 136, the 6400 offers some of the easiest expansion capabilities out there today. It is also easy to add Apple’s TV/FM Tuner card, and the now familiar Performa-based video expansion card. To install the TV/FM card, just simply unscrew the bay cover and slide it in. For the video card, just pop out the logic board and put the video card in its slot. Everything is easy with the 6400!

Rich Multimedia
The 6400 is the first macintosh computer to take advantage of the SRSÂ® (Sound Retrieval System Surround Sound) technology. The SRSÂ® really makes games, audio CDs, and even the “simple beep” system sound come alive. You really have to hear the 3D effect to understand what it is like, but believe me, there is a difference! And, as with all Power Macs, the 6400 has 16-bit CD quality audio built in.

The 6400 is also the first Macintosh computer to have a built-in bass subwoofer. When you have external speakers or a monitor with built-in speakers plugged into your sound output port, it turns into a bass-only subwoofer. When no external speakers are plugged in, the speaker can do double duty, providing both channels of sound. A headphone jack and volume control are located on the front panel, along with an infrared sensor. My only complaint here is the location of the balance control for the subwoofer. It is on the back panel! That means that you have to reach all the way over the tower to access it, and believe me, it is no easy task, especially if you are short!

The Summary
I like the 6400. Although it is on the pricey side, the 6400 delivers what it promises: good performance, rich multimedia, easy expansion and a first-rate software bundle. The only problems with this computer are its price and the lack of a bundled monitor. The price will leave a dent in the family budget, but it is well worth it. With the new tower case design, easier expansion, and a load of other options, the 6400 will definitely be a hit.
-Adam Karneboge

One thought on “Macintosh Performa 6400
Review”