Hello everyone and welcome back to The Starting Line! I guess it’s official that I’m writing for My Mac! This is so much fun! Well, right now I’m writing this on a tablet on board Delta flight 427 to Cincinnati. We’ve just reached a cruising altitude of about 30,000 feet. Four more hours, oh joy. At least I can write this article and check out my new issue of MacUser. Why am I going to Cincinnati? I’ve got a job interview with a major phone company and I hope I get it!!! (more mulah! : > )

Back to the reason you all are here. As you know, I am a newbie to the world of Macintosh and just bought a Performa 6300 back in February. Since then, I’ve had a couple of occasions where I almost ripped my hair out. Now let me give you one good example of what recently happened to me one night. 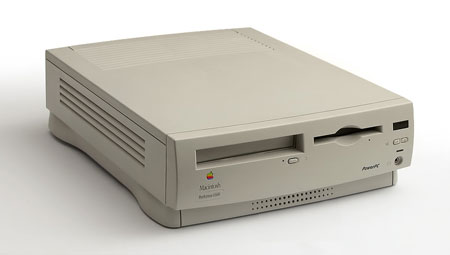 When I first got my Mac, going online was priority numero uno. I started on eWorld, then came over to AOL. I really enjoyed the way that eworld was set up. Easy to learn, smooth graphics, and everyone was helpful. AOL just wasn’t the same, but it was the best of the last three “providers”. During my online adventures, I came across a chat room labeled “eWorld Refugees”. There were a few lost souls there and during the chat, one of them played an online sound from eWorld. Wait a minute, I thought you had to be on eWorld to use that stuff? “Where can I get those sounds?” I asked. The former eWorldian instructed me to go to the Aloha room (keyword aloha on AOL) and download the sounds. Cool beans! I’m there. I get to the file library in the Aloha section and there were all kinds of goodies! So I started to download icons, folders, tributes, sounds and stuff. Then I came across a file that would change the interface for AOL to look like eWorld. I thought “WHOA! That would be cool.” Click download, save….files done!

After restarting, I got that classy bong chime and waited to see that happy Mac smiling back at me. I waited and waited and waited, then a flashing question mark popped up in it’s place. Oh my god! What the hell is this? This has never happened before! I panicked and couldn’t think of what to do. I tried to restart, it wasn’t gonna happen. So I had to resort to pushing in that tiny little shut down button on the back. It was now time to break out the books. I had recently purchased a copy of the complete IDIOTS guide to Mac. So that was my first place to start. Let’s see….trouble shooting chapter…..little question mark…..blah blah blah. Oh, here we go, the book states “An icon of a floppy with a question mark on it is your Mac’s way of asking where the System folder is.” So apparently whatever I had just done to the System folder totally screwed up my Mac, great. The book then goes into a little description of how to get everything up and running again. Just start up off of the Operating System CD that came with the Mac. I plopped that in and eventually figured out that I needed a new copy of the System suitcase. Throw out the old crappy messed up version and put in a new clean version. Wham,Bam, Thank You Mamm!!! At last, the happy little Mac I had been waiting to see all night! Unfortunately, it was now time to hit the hay.

Now I know some of you are saying “That took you 4 hours?!” Well, yes it did. You see, I’m married and have a toddler. These two never seem to want or need anything until I’m on the Mac!! So, between those two and the process of elimination and all the time I spent swearing, I’d say 4 hours is damn good. I won’t be playing with Resedit any more until I can find a book on that. As far as changing the graphics to AOL, I did find a program that did not require Resedit. It looked pretty cool until I screwed it up. I went back to the AOL aloha library to download a new copy and they (AOL) had removed the programs to change the interface, replacing them with a read me file saying NO! NO! You can’t change how AOL looks thats against the rules….Whaaaaa. What a bunch of wussies. They are no fun.

Now, if you want to make your current operating system look 3D, like the upcoming new operating system from Apple, code named Copland. I suggest you tryout ~Aaron. ~Aaron is an extension that changes the look and feel of the Mac. You can find it on AOL at keyword Macworld. It is in the file libraries. If you have the new system update running on your Mac (7.5.3), then you will need to get version 1.3.2 of ~Aaron. Once you get it, drop it on your system folder and restart. ~Aaron is shareware and costs about $10 and I think you will like it.

Oh, man, we’re finally here in Cincinnati! I get to stay in a nice hotel and order all the room service I want, yahoo!! I will write more later. : > )

Hey, guess what! I got the job! Yes! I am sooooo HAPPY! Now, all I have to do is get out of the service and relocate to Cincinnati, Ohio! It will probably take about two or three months but by the time you all read this in My Mac, I should be there. So, if you live in Cincinnati, keep an eye out for a little purple Plymouth Neon with an Apple sticker on the rear window! That’s me!

While I was in Cincinnati, I had time to visit a friend of mine who just recently purchased a PC made by ACER. The ACER looks pretty cool, (it’s the one that’s all aerodynamic and full of holes) but I was not impressed. He knew I was coming out and we both like hockey, so he bought NHL96. He told me over the phone before I came out that it was, just like the coolest game ever, dude. I get to his house and I’m anxious to check out this game, but he runs into a problem. The game won’t run off of Dos, so he tries it through Windows ’95. Now my buddy only has 8 meg of ram and I’ve got 16, you could really tell the difference. I really felt bad for him, he thought this was a cool game? It was all blocky and choppy, the music would skip, etc. I told him he needed to buy another 8 meg chip and that this game would look nothing like this crap on my Mac. I think he got a little offended because he immediately started to slam Apple. “They’re going out of business” and “They won’t be around in two more years” were some of the phrases I recall. So I asked him “Why didn’t you buy an Apple?” His response was ” Well, all I hear on the news is how they ‘re going out of business. Plus, you can never find software for the damn things.” (Like he’s looked?!) Whoa! OK! Time out! It was now my “duty” to straighten him out. I explained how the media totally bent the two quarter loss into “OH MY GOD ! They’re gonna sell the company and all the Ceo’s will jump from the roof at noon! What a bunch of crap. Plus, I quickly pointed out that most of the PC market software titles are just duplicates. For example, how many DOOM like games are out now? What about all the useless nickle and dime software? Example: 10 cd rom’s for 10 bucks! Give me a break! Anyway, I think I set him straight on the Apple going out of business B.S. My job was done.

I spent about 5 days total in Cincinnati and let me tell you, I now know that I am addicted to my Macintosh. I went through withdrawal, man! I had the shakes and could only think of checking my email when I got home! I’d better get a new Power Book for next time! Ha! Ha!

Well, that’s about all for now. I hope you are enjoying this issue of My Mac! If this is your first issue and you would like to receive a copy every month via email, just write to the bossman Tim at DS9DS9@aol.com. In the subject field type “subscribe” and your name. If you know other Mac users, please tell them to check us out, or simply give them a current copy on disk! Later- DLR