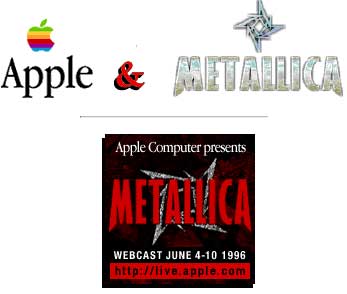 So what do you get when you cross one of Rock’s most popular bands with a huge devoted following, with one of computerdome’s largest, most popular companies? Well, on June 10th., 1996, you got the Metallica/Apple WebCast. And I was there. (Well, for a while…)

Let me start off by saying I am one of the most faithful listeners of Metallica, and of course I love My Macintosh computer. So I was more then a little looking forward to this WebCast.

Well, if this is the power of the Internet in all its glory, it has a long way to go. While I like the fact that these events take place, I like the fact even more that it is Apple leading the way. More and more of these types of events will happen, I am sure, and each one will be a learning experience for not only the end user (viewer), but for the companies that sponsor them as well. That said, I must say that for what I saw/heard, I had a good time. Why this should be a big deal, though, is a baffling one. Can’t we see/hear a live concert via television now? And at a MUCH better quality? So what is the draw here? Read on….

Yes, you had to download and use helpers to see/hear the Metallica WebCast. Some of the helpers I already had, such as RealAudio and QuickTime VR. (Which saved me over 1,000k worth of downloading!) Some others, such as QuickTime TV, which is over 3MB in size (!) and Global Chat (A measly 429K), I had to download. But now that I have them, I do not have to download them again! (Until QuickTime TV expires, I believe sometime in September) QuickTime TV is what what let you see and hear the WebCast, while Real Audio would provide you with sound only.

First, the viewable image from the QuickTime TV software was not very good. Think of a thumb nail sized TV on your screen, and the bigger you make it, the worse it looks. The Audio was not very good either (to put it mildly), even running on a 28.8 modem. Sounded like an AM radio in a tin can. Yes, that is bad. But to join the fun, users simply clicked on a Hypertext link, which would launch the needed helper application. I found that, once you had started QuickTime TV, you were better off if you then quite Navigator, to free up needed memory.

But as bad as it may have been for me, I heard nothing but complaints from the WinTel users. They all seemed to be upset that it was Apple hosting the event, which to me made perfect sense. A match made in heaven. Window users had to download SteamWorks from Xing, or MBONE, both of which were downloadable from the WebCast site. (which I doubt would have been the case for Mac users had Intel hosted the event) Still, most WinTel folk I talked with in the GlobalChat room had nothing but problems configuring the software. I was SO tempted to tell them they should have just bought a Mac, but I was outnumbered! Outgunned, I tell ya! Besides, I was planning on joining the MOSH pit during the show, and did not want to offend anyone beforehand 😉

Hero Of The Day

What was almost as much fun was the chat room set up for fans. I am not a big “chat room” type of guy, but this was cool! A bunch of Metallica fans like me making fun of BonJovi and Alanis Morissette. Yeah! PARTY! But the day of the WebCast, the chat rooms were a nightmare. Too many people all talking at the same time. Not fun. I did make one friend, and even though he is a Windows user (In Israel, no less!) I got his email address and we have exchanged Metallica graphics and sounds we both had or made, and are even planning to swap some rare bootleg, Uhh!!!! Umm!!!, I mean rare recordings!

Yes, it was fun. For the first three songs. Then, for some reason which I still don’t know, I got cut off. Just like that, my connections goes dead. Kaput. And afterwards, I could not get back in, no matter what I tried! I was so bummed. Heck, I even tried using JUST ReadAudio so I could at least HEAR the concert. But that did not work, either. I am, to this day, still not sure if the problem was on my end, or that the system was just THAT busy. (Bandwidth, don’t ya know!).

The Frayed Ends Of Sanity

I was depressed. Here were two of my favorite things in the whole world, Metallic and Macintosh (Well, Apple), and I could not join in the fun. I was bummed. And mad. Mad that I only got to see a few moments of what was billed “The web event of the year”. I mean, what did I do to deserve this!?! All I wanted to do was kick back, put on my headphones, and watch Metallica jam for a few hours in San Fransico. But no, I was kicked out. Banished. Always wondering what the next song would be, what the last song would be, what….well, you get my point.

All was not lost, however! The next day, I see an advertisement saying there would be an audio only rebroadcast. Yeah! I was IN, baby! And maybe, MAYBE the audio only broadcast would be better than the audio/video one. Alas, it was not to be. Oh, sure, I did get to hear the whole concert, all one hour and forty one minutes of it. And it was a rocking good time at Tim’s desk that night, let me tell you! But the audio was hideous. RealAudio is a neat thing, but it is still a far cry from even a distant AM radio station.

I have seen Metallica many, MANY times in concert, own a few video tapes of shows (One that I am in the crowd, even!) But sitting at my computer, listening to a group I have been following since back in ’85, it just made it more personal. More intimate. While the audio was crap, the video lame and a feeble thing to behold, it was nonetheless fun. Metallica is meant to be heard LOUD, with Lar’s drum beats crushing into your chest, with Jason’s Bass booming your eardrum, with Kirk’s solo screaming at you, and James yelling “Seek and DESTROY” louder than a fright train at three yards away, all that lost something coming over the tiny pipe of a phone line I use. But it was, after all, Metallica. It was, after all, Apple. And it was, of course, the first of such events, with many more looming on the horizon. But most importantly, it was a learning experience. For me. For Apple. And for Metallica, who found out that the days of the “Computer nerds” died many years ago, and that the ‘Net is swamped with people from all walks of life, from all over the world.

But more importantly, we all learned that going to a concert does not mean you have to get arrested for wearing a bootleg concert tee shirt:-)