Perhaps some of the audience of the MyMac.com podcast can recall Tim’s request several weeks ago for people who would like to write for the website. I’ve been listening to the podcast since 2006. In fact, Tim and his crew actually helped me make the decision to switch over to the Mac platform. After debating the idea for a bit, I decided that I might as well give it a try.

AudioBoo is a fairly new audio blogging application that is available free of charge both online at AudioBoo and on the iTunes Store. AudioBoo allows users to quickly and easily record audio blogs that are up to five minutes in length. Your blogs can then be heard at AudioBoo’s website and on the iPhone application, once it is linked to your free account. Simply create an account and you’re ready to “boo the night away.” Your picture, or avatar, comes from Gravatar, which allows you to set up a customized avatar for a number of other websites. AudioBoo is very similar to TweetMic, an app that Tim introduced us to a couple of weeks ago, except AudioBoo is free. It’s not like 99 cents is going to break the bank, but there are a lot of us out there who are cheapskates. 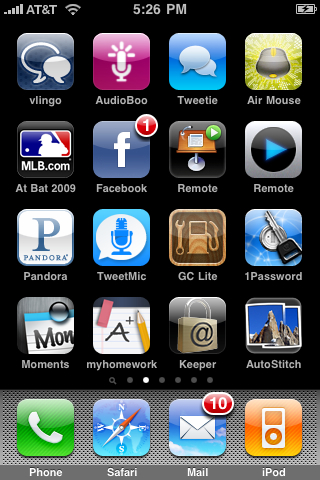 The first thing you’ll notice when you install the app on your iPhone is the icon. Its design is pretty sharp and eye-catching. The hot-pink color really catches your eye amongst the other icons on your phone. I would say that having such an eye-catching icon could be important because, let’s face it, we are all probably guilty of placing a ton of apps on our iPhones, and getting your attention is what developers are striving for. The application has a very simple and elegant interface. AudioBoo doesn’t have many bells and whistles, but what it does, it does very well.

Perhaps the first thing you’ll notice when you listen to “boos” from others or those that you have recorded yourself is the amazing sound quality that you get from the application. I think it allows you appreciate the capabilities your iPhone truly has as an audio device. From now on, any issues that I have with my iPhone regarding call quality will lie squarely on the shoulders of AT&T, for I now know what my iPhone is actually capable of. 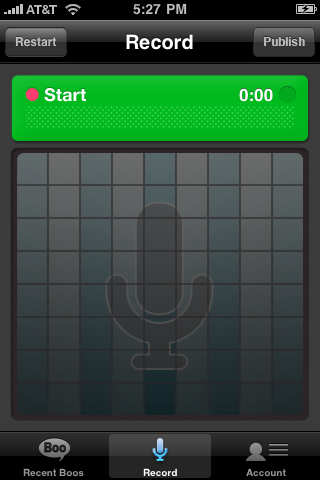 I recorded my first boo as a review for MyMac.com. I recorded the boo in my front yard on a breezy afternoon. I intentionally wanted to hear how the sound quality would be in a real-world location away from the relative quiet of my man-cave at home. Aside from some wind noise, the sound quality was awesome! Give it a listen at the link above and post a comment with your impressions of it. 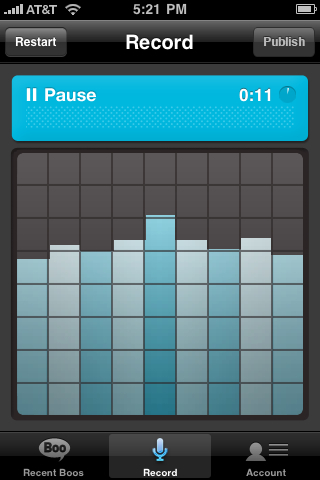 There exists a great deal of potential for this application when it comes to recording live news reports from the field, recording trip logs or reviews, and even for teachers like myself. I foresee using it as a way to communicate with the students in my high school Earth Science and Biology classes while at home without a lot of production effort. As a podcaster, I can appreciate the amount of time and effort that goes into preparing a decent product. Unfortunately, we don’t always have that kind of time available to us.

I don’t like the fact that the iPhone version of the application doesn’t have a search feature built into it. You can do so online at their website, but it would also be nice to be able to search on your mobile device. I did notice that the iPhone app can be a bit “buggy” at times, with it quitting on me several times as I first began to use it. I’m not sure if this is a function of the RAM in my iPhone running low or if it’s a problem with the app itself, but that’s always annoying when it happens â€” especially if you’ve just finished recording and are about to upload it! The app also doesn’t have a way to link your boos to FaceBook or Twitter directly from the iPhone. You can set it up to do so from their website, so if you do that just once you probably don’t need to concern yourself with it ever again. 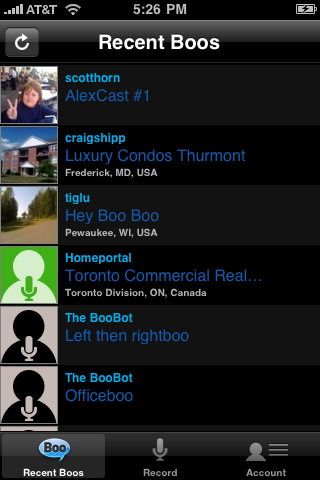 One particularly interesting feature that I haven’t seen on other audio blogging apps is the ability to subscribe to AudioBoo uploads as a podcast on the iTunes Store. You can do this in one of two ways; you can receive the boos of everyone (yikes!!), or just the boos of people you have decided to follow. Innovative, but I’m uncertain whether or not it’s useful yet.

Well, that about wraps up my first attempt at writing for MyMac.com. Leave a comment to let me know your thoughts and ideas.