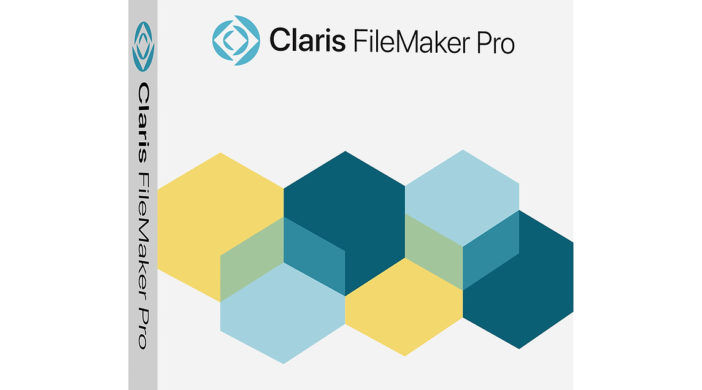 MyMac last reviewed FileMaker Pro (version 18) a year ago. Filemaker, the product which began life as a database, had already (version 17) been â€œrecastâ€ as a platform for application development.

Not long after that review, FileMaker Inc changed its name (back) to the venerable Claris. Older Mac users will remember and love Claris as the company which brought us ClarisWorks and eM@iler, on which the current Apple Mail application was based.

Has it been a while since you thought about FileMaker? Do you still think of it as database software (albeit extremely powerful)? If you havenâ€™t kept up with the extent to which FileMakerâ€™s market penetration and user base have grown – to more than a million, then do take a look at this pageâ€¦ you may be in for some surprises.

Now here is FileMaker 19. The product still has that name. But FileMaker 19 should be seen as Clarisâ€™s first open platform for software development. Yes, its core engine remains a highly-sophisticated RDBMS. But FileMaker 19 can do much more. And there are significant new features as well.

The product/platform is increasingly being called Claris FileMaker (â€œAdvancedâ€ has gone, although the filenameâ€™s extension is still â€œ.fmp12â€). Itâ€™s aimed at anyone who wants to build their own robust, cross-platform applications. â€œPlatform-independentâ€ might be betterâ€¦ FileMaker apps run on macOS, iOS, the web etc and Windows.

Such applications are flexible and robust solutions for home, groups, large and small businesses, in administration, commerce, the arts, and accounting. They are suitable for contact management, libraries and warehousing; for project management, client relations, (inventory) tracking, event planning, research, tourismâ€¦ FileMaker solutions work well almost anywhere that data needs to be input, edited, retrieved, displayed, shared. They work when workflows (collaborative or single) need to be storyboarded, prototyped, designed, tested and deployed.

To achieve this, Filemaker sports a sophisticated user environment so that development is both accessible and expeditious. This short video ((Copyright Â© 2020, Claris International Inc.) will give you some idea of how much more ambitious FileMaker has become. Version 19 more than ever.

Simpler, more modest, single-user databases are still possible. The file format used in version 19 is fully backward compatible to FMP 12; the platform support back to version 17.

There are a number of new features and/or significantly improved ones in FileMaker Pro 19.

The most significant of these is the full integration with JavaScript. FileMakerâ€™s own already extremely powerful, robust and flexible scripting environment (really one of the keys to why FMP has been so much more than a â€œdatabaseâ€ for many years) now allows you to call native JavaScript functions in a FileMaker script; and lets JavaScript code call FileMaker scripts. What makes this so powerful is the seamless integration. Itâ€™s as simple as:

Think about it: the tens (hundreds?) of thousands of polished and stable JavaScript routines and libraries have suddenly become available directly (from) within FileMaker apps. At the same time, you can now display and interact with (output from) FileMaker apps in your browser.

As FileMaker has grown, so have other forms of integration with third party protocols and systems. For instance, RapidWeaver developer Tim Dietrich has already written a Stack, FM Publisher, which will allow sites developed using RapidWeaver to interface directly with FileMaker Pro 19 databases.

Also new in this version of FileMaker is the ability to add such significant enhancements as Kanban boards, (photo) galleries, timelines and progress bars; but quickly and almost effortlessly with drag and drop. Itâ€™s in Claris Marketplace that you can expect to see many more of these integrated tools as they grow in number and variety.

FileMaker apps can now be created directly in FileMaker Pro and pushed to FileMaker Cloud without fuss. You can now host on whichever OS platform you want: for registered developers there is now a FileMaker Server for Linux in preview status.

You can read NFC (Near Field Communication) tags in FileMaker Pro 19 immediately to identify appropriately tagged inventory â€œin the fieldâ€; then use it to find and edit (etc) any such record in your tables. Because NFC tags can contain almost anything, there really are few limits to the ways in which you can build interfaces between the physical world (tagged objects) and FileMaker apps. But it will be of particular relevance and use if youâ€™re developing for commerce.

This version of FileMaker Pro 19 supports Appleâ€™s Core ML infrastructure. Machine Learning can be employed, say for image recognition, object detection and things like text prediction. Again, in the right milieu, some extremely powerful results can be achieved.

Half a dozen or so apparently minor – but in fact significant – features have been introduced in version 19 which will make development (particularly scripting) easier and more powerful still: in FileMaker Go Siri Shortcuts now allow you to search and run scripts etc with your voice.

Itâ€™s possible to copy and paste state styles between button bar segments. And {PageCount} can now be used to print the total number of pages in a report etc. Fields can now be formatted in scientific notation.

Developers often need continually to switch between Layouts as they make and iteratively refine style changes. Developers will thus appreciate the new Cmnd+alt+K option to Type-ahead for the names which they have assigned to multiple Layouts allowing instantaneous reviewing.

The User Interface capability of Card Windows (a display feature needing simpler scripting than modal popovers do – typically as a tool for pickers/selectors) was previously unavailable in WebDirect. Now it is. WebDirect has new script steps too.

Lastly, youâ€™ll see two new functions: ConvertFromFileMakerPath and ConvertToFileMakerPath. Small but a time-saver for some.

The installation procedure for FileMaker Pro 19 has been streamlined. You can now just drag one file to install FMP 19.

All of these features and enhancements evaluated for this review worked flawlessly.

FileMaker Pro 19 has several small but useful changes to its interface and appearance. The first thing youâ€™ll notice is likely to be the product lineâ€™s new Claris logo, which was announced at Developer Conference last year. If you use macOSâ€™s Dark Mode, youâ€™ll be pleased to see that it too is supported in FileMaker Pro 19.

There may be occasions when a more â€œout-of-the-boxâ€ pre-built solution suits: say someone has already designed and built a contacts/address book or asset management application. Still entirely customizable for your own exact situation, FileMaker templates can save time and add an edge to the visual appeal and workflow. Version 19 comes with more new templates to choose from, adapt and build around.

Quick Open lets you set a FileMaker Pro 19 preference which will automatically open/launch a specified file when FileMaker itself starts. This will make life even easier for developers who want to make operation of the applications as turnkey as possible for their (perhaps busy and/or non-specialist) end users.

Claris is moving in the direction of more traditional SAAS offerings. This means that releases will be rolling – as opposed to once a year. But you can select to pay either a monthly subscription or annually – and always get automatic updates as new features become available. This page has the details.

(Technical) support has always been good for FileMaker Inc products. The reborn Claris seems to have taken over this support infrastructure (from itself!) very smoothly.

After consulting the documentation here, and the help here, you can find a summary of the latest version and update numbers here. More personalized tuition is to be had at the Claris Academy. Search the extensive knowledge-base as well.

If all else fails, contact Claris directly here. Often the best option is the FileMaker Community. Its many pages are teaming with experts, specialists and very experienced users in every area of FileMaker useâ€¦ replies and illustrated suggestions often come back within minutes of your posting a question or airing a problem.

These options are (directly or indirectly) available from the Help menu in FileMaker Pro 19 itself. As is a list of keyboard shortcuts, an option to find consultants, partners and more â€œoff-the-shelfâ€ solutions is here.

Yes, FileMaker – particularly as it has grown in the past few years – is complex and works like few other packages in very many environments. But those invested in making the best use of it, will already appreciate that itâ€™s necessary to put some work into becoming as familiar as possible with just how rich and extensive are its features and potential. You could hardly be better served than by Clarisâ€™s support structure.

Conclusions: MyMac has felt that several previous update/upgrade versions of FileMaker Pro carried too few features to warrant the rather high price.

Consider the new branding of FileMaker – as a Claris product that now interacts with as many â€œthird partyâ€ environments and software as well as it does. Consider FileMaker Pro 19â€™s use as a robust and flexible application development platform). Consider the reshaping of the development and release schedule (even though subscription models are not to everyoneâ€™s liking).

You have the consolidation of a product which reflects what must have been a huge shift within FileMaker/Claris to position FileMaker Pro 19 as the leading platform capable of an immense range of sophisticated and complex tasks in many environments. Itâ€™s one that can live up to almost anything which is asked of it – elegantly, reliably and (perhaps a personal view) enjoyably.

Yes, working in the FileMaker development world is a delight. Not only for all the avenues of (online) technical support and community. But also within FileMaker itself: menus are always in the right place. The Layouts are beautiful. Buttons and easily-edited scripts can be consistently managed and deployed.

If youâ€™re old enough to remember Hypercard, and how it felt so excitingly enabling, then FileMaker brings back happy memories. But what a long way it has come. FileMaker Pro 19 embodies those advances. At the same time, this release gives us the clearest view yet into what must be to come; and how well the whole system is going to work – and be capable of ever more useful and flexible creations. It is recommended without reservation.

Cons: none to speak of; everything worked as expected during this evaluation period.