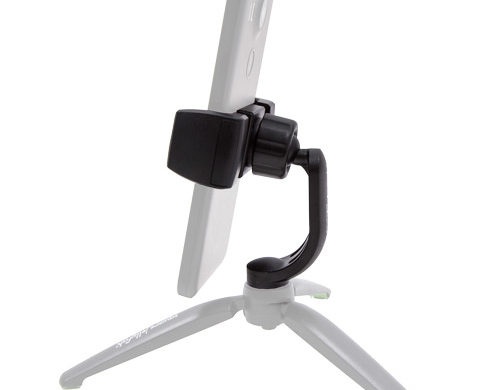 I think most of us have seen the meme where something fails in a spectacular fashion and a couple of cartoonish protagonists are standing there saying, â€œYou had ONE jobâ€¦!â€. Well this isnâ€™t about those kinds of products but one that actually has just one job and does it pretty well.

The Jellyfish Jelly Grip WX Tripod Mountâ€™s ONE job (small tripod in picture not included but sold separately) is to hold a rectangular thin slab of some material which is usually a smartphone and allow it to be moved into various angles while still holding that thin slab of some material securely. It does this job without complaint and has some pretty neat engineering with a lot of thought put in not only to allow it to work properly, but also to keep its cost down.

To start off, thereâ€™s the grip for your smartphone. A little rubber padding on both of the grips protects your phone from scratches and helps hold it safe and secure. Some smartphoneâ€™s outer casings can be a little slick or slippery, but thatâ€™s no problem for the spring loaded mount that stretch a little more than 4-inches which should be wide enough for nearly any phone and is deep enough not only for your phone, but can also accommodate Jellyfishâ€™s wireless (works with both QI or the Qualcomm Quick Charge) charger (not part of this review).

To move the grips holding your smartphone to the optimal angle for your viewing, thereâ€™s a ball mount with a simple twist to tighten or loosen. The arm connected to the ball is recessed to easily allow your mounted smartphone to be held in either landscape or portrait mode. On the bottom of the arm is a 1/4-inch thread that can attach to most accessories like selfie sticks, sports camera attachments, and some car mounts. I use the one I have attached to my rear view mirror for recording Guyâ€™s Daily Drive (look for it in the podcatcher of your choice) on an infrequent basis using some GoPro mounting accessories.

I chose the one reviewed for that specific purpose since I use CarPlay for everything else, but not everyone is so lucky as to have that as an option. Jellyfish has a few different options to suit most needs including an innovation vent mount that can also hold a Garmin GPS if you still have one of those things.

If I had one complaint, it would be that not all the products in the line can work with each other. It would have been nice if some of the mounting products were capable of being interchanged with others in the same line, but I suppose most people will find the one that works for them and never need to do so.

To sum up, Jellyfish has created a series of products to charge and mount your phone in nearly any car and they are well designed and crafted to last a long time. At a price that wonâ€™t break the bank either.