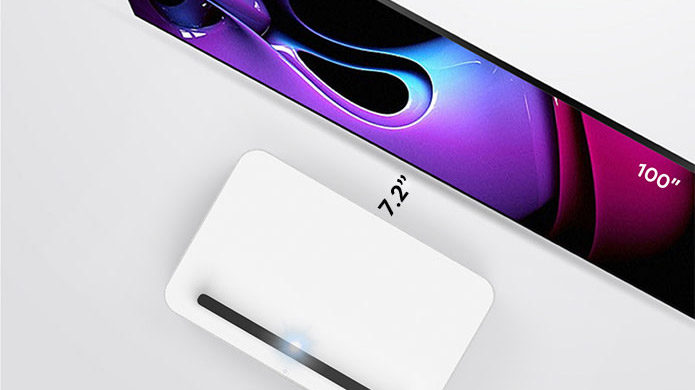 VAVA 4K Laser TV is a short throw 4K projector. It features support for screen sizes up to 150â€, 4K UHD display, and supports ALPD 3.0, Premium Dolby Audio, Smart Eye protection, Smart Android System, with three HDMI inputs, one USB port, Optical Audio Out, Bluetooth connectivity and Ethernet. The projector is short throw, meaning that it can be placed directly in front of the wall or screen instead of further back. Once it is in place, you can project content from one of the HDMI inputs or from the smart TV system.

Packaging is done well. The box contains the projector, instruction manual, remote, cleaning cloth and power cord. The instruction manual is thick, but it is printed in many languages, so itâ€™s not as daunting as it appears at first. There is a lot of documentation describing placement of the unit, however I found that it is a lot easier than it looks. To setup the unit, place it on a flat surface large enough to hold it and a few inches away from the wall or screen you want to project to. Either connect a device such as a cable box, Apple TV, DVD player or computer to one of the HDMI ports. Insert batteries into the remote and plug in the VAVA projector.

After the initial pleasurable shock of seeing a large bright screen on your wall, you are greeted with the setup program. The first step is to pair the included remote by pressing the Back and Menu. After a few seconds, it pairs and you continue through the steps of selecting the language and WiFi network. At the end of the setup, you are presented with a few graphics helping you where to place the device.

In my test, I projected to a very light grey wall in my dining room. I found that moving the unit a little forward or backward and adjusting the height with the projectors feet was all I needed to get it right. It takes a few minutes to get it right, but itâ€™s very easy to get the biggest screen possible on the space you have. Next, I downloaded some apps from the â€œAndroid TVâ€ App Store including Netflix, YouTube and Plex. I also connected an iPad mini to it using a lightning to HDMI adapter. That is all that is needed to do the setup of the VAVA.

After the setup, it is time to start watching. I watched a few YouTube videos and the quality of the picture looked great. It was very clear, even though my wall is not completely smooth and white. I watched some 4K videos and while I couldnâ€™t tell the difference by a lot, it looked excellent. The projector includes built in Harmon / Kardon speakers. While you can connect any other speaker up to it, using the line or optical out, the quality of the built in sound was loud and clear.

During the day, my dining room is bright due to it being next to the windows. I didnâ€™t have any issues seeing the picture and the sunlight didnâ€™t seem to affect the clarity. It looks even better in a dark room.

I installed and launched Netflix next. This is when I ran into my first issue. The remote didnâ€™t allow me to navigate the Netflix interface. I wasnâ€™t able to scroll or select anything on the screen. After thinking a bit, I remembered that it has Bluetooth, so I grabbed a Bluetooth keyboard and mouse, paired in settings and relaunched Netflix. I was now able to log in and navigate the UI. I loaded up the movie Dirt, which is the Motley Crue movie and blasted the music. It was a great movie watching experience. I then installed Plex and fired up Bohemian Rhapsody and was impressed with the clarity and sound. All in all, the complete experience from opening the box to watching Rami Malek lip sync to Freddie Mercury was an easy and rewarding experience.

Not everything is perfect with the VAVA projector. The unit is fairly loud. The fans run and you can definitely hear it from across the room. Once you are watching the content you start not to notice the noise, but this is something you donâ€™t want to leave running all the time. You want to turn it off when not in use. The other issue is the built in smart TVâ€™s App Store. This is not the Google Play Store, or the Android TV store. It ships with a store called ApoideTV and you can tell fairly quickly that this is not the walled garden that other app stores are. There are some shady apps in there, some that allow you to illegally stream content. Also, to find what you are looking for, you need to do a search. This is not a deal breaker as it is easy to connect another smart device to an HDMI port such as an Apple TV, Roku, Chromcast or Fire TV.

4K Ultra short throw projectors are a new product category. They started appearing in 2017and since then, they have improved and come down in price. There are other products out there that may not be 4K or lack the features of the new projectors. Because of this, the prices of the projectors greatly vary. Generally a 1080p projector is under $1000, and a 4K unit ranges in the $2000 to $4000 range. When they were first released, they were closer to $7000. The VAVA falls well into the correct range and has a nice balance of price, quality and features.

MyMac Review Rating is 8 out of 10. Very easy to setup and position. Excellent video and sound with a large bright display. Minor issues include a loud fan and the lack of a proper App Store built into the smart TV.