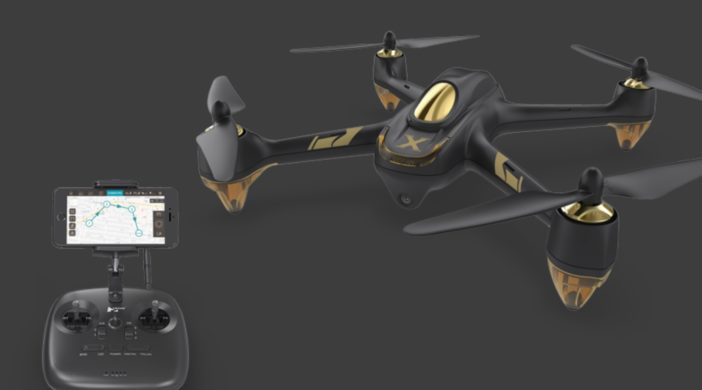 H501A X4 Air Pro Advanced is an app compatible, 1080p, First Person Video drone. It can use an iOS or Android device for the remote, and the tested Advanced model includes a remote as well. The camera shoots 1080p HD videos. The droneâ€™s features include WiFi, GPS, Automatic Return to Home, Waypoint, Orbit Mode and it has 20 minutes of flying time.

Packaging is very well done. The box contains the drone, remote, instructions, charger, battery for the drone, battery for the remote, USB cable, eight fan blades, fan blade removal wrench and a camera filter. The first step of the instructions is to download the companion app for your iOS or Android device. The instructions are decent, but there is a lot that I needed to figure out on my own. They call it a quick start guide which is more accurate. This is my second drone and the first one I tested was a lot more entry level than the Hubsan. Even with my limited experience, I was able to figure out how to get started.

The first step is to start charging the battery. There is one charger and two batteries, one for the drone and one for the remote. The remote battery charges quickly and lasts for a long time. The drone battery does take a lot more time to fully charge and it will give you about 20 minutes of flying time.

The next step is to attach the blades. They screw into the drone. Two screw in one way and the other two the other way. The wrench can be used to tighten or remove the blades. While the batteries are charging, attach the antenna to the remote by screwing it in.

Lastly, remove the sticker backing off the camera filter and stick it onto the camera. Now while the battery is charging, read the quick start guide, look at the app and watch some videos that are on their website to get ready. 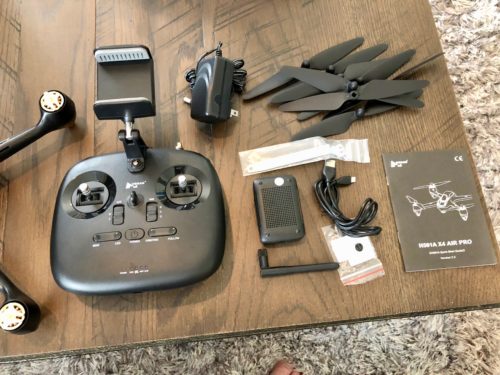 Once the batteries are charged it is time to get flying. The remote control has a battery compartment where the battery gets inserted. There is a screw that holds the back piece in place, but I found it better to leave the screw out because of the amount of time I would be recharging the remote battery. On the drone, you open the rear area to reveal the battery compartment. Then slide the battery in, connect the cables and close it up. The drone lights up and starts to beep. To record videos and to take pictures, you need to insert a micro SD card into the slot on the drone. I had to do a little research first, but after formatting the card to ExFAT on my Mac, I got it working. In an open space, away from trees and wires I opened the app.

The first step in the app is to connect to the drone. To do this, you need to connect to the droneâ€™s WiFi network. If you miss it, the password for the network is 12345678. Once connected, the app will have you agree to the license and then proceed to have you do a compass calibration, horizontal calibration and then a GPS test. For both of the calibrations, it shows you a video on how to rotate the drone. For the GPS, you need to be in an area with good GPS service. If you arenâ€™t, the drone wonâ€™t fly unless you override it.

Now we are ready to take off. There are lot of different ways to fly and a lot of different methods for each. You can use the app to control it or the remote, or a combination of both. To include every method and way to control the drone would be daunting for this review, so I will just list some of the best methods I discovered. I found the app is best for all functions with the exception of actually guiding the drone. The joystick on the remote is the best way to make the drone go up, down, left or right. The app does have a virtual joystick and that works as well, but the physical remote feels much better. The app has flightpath controls, VR Mode, automatic takeoff and landing and camera and video controls. It also displays the feed from the droneâ€™s camera. You donâ€™t need to use the flight path controls and can do free flying if you like, or you can do a combination of both.

The first flight path mode I tried is my favorite. Itâ€™s called Waypoint mode. When you choose it, the app opens a map of your current location. You can then draw out a path of where you want the drone to go. It can be up to 1000 kilometers and will tell you if you are flying it for too long due to the batteryâ€™s charge. Once you draw the path it will place numbered labels along the path. Clicking on the labels will give you options such as how high you want it to be at that point, how long you want it to be there and how fast it should travel in that area. Once the path is drawn, you hit submit, take off and click done.

This was an amazing first test and to be honest, it was terrifying. I watched the drone go up and then it left my sight. I could see the camera feed and I knew it was going where it needed to be but I wasnâ€™t 100% sure I would ever see the drone again. After about two minutes I clicked on the return home button and within about 20 seconds I saw it coming back to me. It landed and I immediately watched the incredible video. This was the point when I knew that this thing was not a toy and it was the real deal. I was amazed that it worked perfectly, came back to me and shot very good looking video. 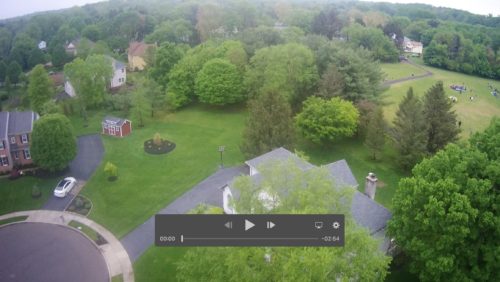 I then started testing out the other modes. The next one is called Following Mode where the drone will follow you as you move. I just ran around and it worked, but the real use of it would be for people doing more exciting things such as biking or climbing. Orbit Mode is exactly what it should be. It shoots the drone straight up and then comes down. Its a lot of fun.

The last mode is VR Mode which you would use with a VR headset. I donâ€™t have one to test it out with, but I plan to test that out at a later date. All the settinsg and modes can be done from either the remote or the app, however for the remote, you need to know how to control and activate it. This is why the app is a lot easier for doing these modes. The remote is great for free form flying. The app gives you plenty of information such as the droneâ€™s location, remaining battery time, speed, signal strength and GPS strength. The battery does get the advertised 20 minutes and takes about two hours to fully recharge. 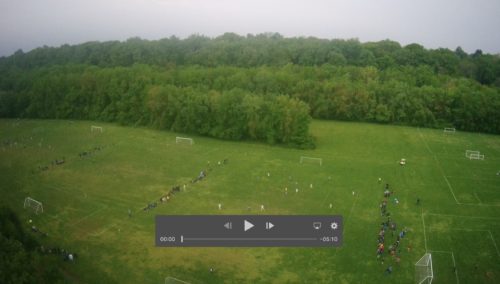 H501A X4 Air Pro Advanced is a real drone. There seems to be three categories of drones out there. A sub $100 drone which is more of a remote controlled toy, a drone in the $200-$800 range which is for the amateur drone pilot, and ones that cost a lot more that are probably used by professionals who need the aerial views. The H501A is in the low price range for a drone of these capabilities. I accidentally flew it into the wall of my house once and it survived with no problems, so I know itâ€™s solid.

Controlling it and doing the flight path modes worked nearly flawlessly. The video and photo quality is very good. But most of all, itâ€™s very fun and exciting. The company has a good reputation and others have said that their support is good. This is a Chinese company and has offices all over the world. This doesnâ€™t seem to be an issue, because there are many sellers of this drone and many options for support.

During the tests I only encountered two issues. The first one was my fault when I learned not to touch the blades while they are spinning. Ouch! The second was when I didnâ€™t put it in Orbit Mode but went as high as I could go manually and I lost connection to it. It was a heart stopping 15 seconds but eventually it connected and landed perfectly.

Some parts of the app could use some work, specifically the video and picture library it creates. I found that the best way to get the media off was to put the Micro SD card in a computer. There is still a lot I have to learn, but I am excited to take it out again. 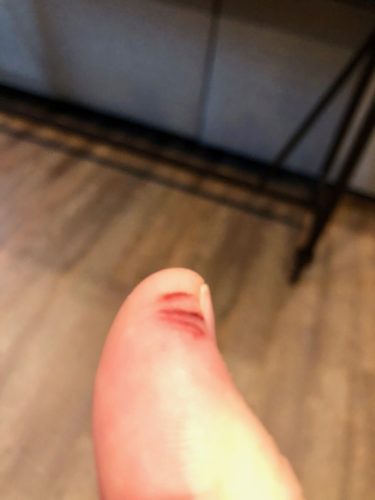 Here are some of the videos from my test flights.

MyMac Review is 9 out of 10. This drone knocked it out of the park, literally. I donâ€™t think you will find anything comparable for the price. Very easy to setup and fly and feels like itâ€™s built to last.