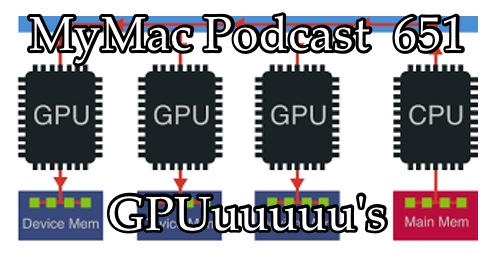 Well Apple is screwing with our Imagination, wait no, they’re screwing with Imagination Technologies because they are going to use their mobile GPUs anymore. Since that’s a main portion of their business, they have no imagination about what to do next. Also, Apple to sell a TV bundle which doesn’t exactly set the world on fire innovation-wise and apparently Apple is one of the few truthful companies when it comes to battery life

MacStock Conference and Expo: Save $30 off the Premium and Standard ticket prices with the code “MYMAC30OFF”

Well we already knew this

Is this really re thinking TV Come on Apple, I don’t think so!

I know Companies do this for ‘Jobs for Sales’ but I thought Apple were above this, though I suppose the governments are trying to support their economy and Apple want the sales 🙁

Guy’s Pick: Clips by Apple. A fun, easy to use little recorder for audio and video.

Gaz’s Pick/Tip: I had to do a flowchart at work, now we used to use Visio which I liked, but that doesn’t seem to be available anymore well not at a price that the company is prepared to had out licenses for. Well I found DRAW.IO and it’s an online application so yes I completed the flow chart at home on mymac 🙂 Some things make this not as integrated as it could be but I found that it had all the tools I needed and I was happy with the finished product.