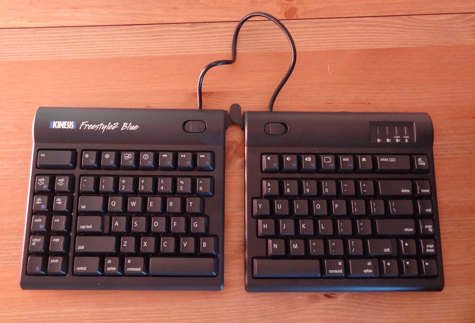 The Kinesis Freestyle2 Blue for Mac reinterprets the the traditional QWERTY keyboard model with two modular keypads. The keypadsÂ can either be used separately, or fused together to provide flexibility for touch typists or those who want an ergonomically favorable keyboard.Â  Bluetooth connectivity allows three devices to be paired and selected with the press of a single key.

The use of a keyboard is a very personal things for most mac users, we all have distinct personal preferences for the typing we do on a daily basis. Traditional sprung keyboards with mechanical feedback, such as the Apple keyboard II, are still popular with many touch typists whereas the standard Apple keyboards have evolved into chicklet style shallow depth keyboards, particularly on the new macbook. If you are frequent writer, and/or a touch typist, the Freestyle2 Blue is a keyboard you may like.

The Freestyle2 Blue comes in a sturdy box with the components and instructions to hand. Setup is reasonably straightforward with the instructions provided and after an initial charge theÂ keyboard can be paired through pressing the connect button on the rear and selecting one of the three channels. The selected channel is indicated by a blue indicator light and can be changed by pressing the key combination of function and the channel number. I paired the Freestyle2 Blue with my Mac Mini, my iPad Pro and my iPhone and was able to switch between them without problem. Although this keyboard is designed for use with OS X, I was also able to pair it with my Windows 7 bootcamp partition. In this situation it functions well as a basic keyboard, but the special function keys do not work (though there is a windows version of the keyboard if this is an essential feature). 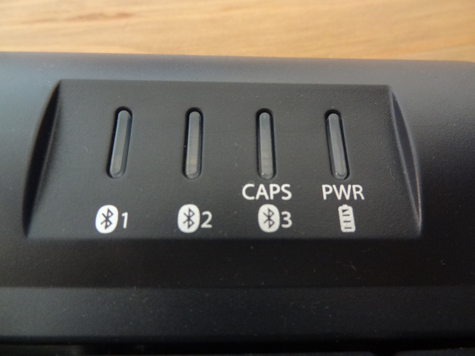 The keyboard is split into two keypads through the middle of the keyboard (between the 6-7 and b-n keys), with theÂ keypads mapping to the left or right hand. The ingenious aspect of this keyboard is the flexible arrangement of the keypads. Aided by the bluetooth connectivity, the relative positioning of the two keypads is limited only by the 30 cm tether cable between them. This ergonomic arrangement is excellent for minimisingÂ hand or wrist strain when typing. The keyboards can also be locked together if a single keyboard is required through a handy locking mechanism that isÂ easily removed. Â Visually the keyboard is designed for function over form with a basic black plastic design that pales in comparison to Appleâ€™s stylised keyboards, but this is a keyboard which was designed to be practical and not to look pretty. 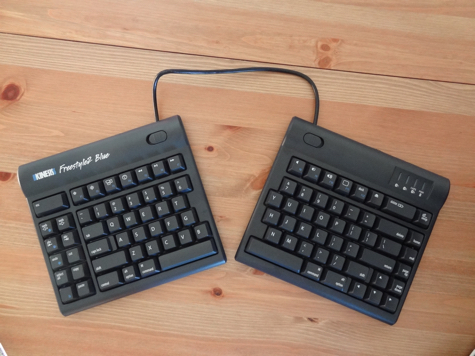 I found that for the first couple of useÂ I would often mistype the letters in the middle of the keyboard (there is certainly an adjustment period involved). Once adjusted though, I have come to appreciate the cleverness of arranging the keypads to reduce strain on the wrists. I have certainly noticed that after long periods of typing that my hands are less tired. The keys have a good amount of travel in them and are satisfyingly sprung if you enjoy feedback when typing.

The keyboard also has some nice extra functions as would be expected for a premium keyboard. There are dashboard, expose keys, and iTunes track controls on the top row of the keyboard. These are supplemented by a set of useful keys on the left of they keyboard (shown below) to save repeated mouse or key strokes. Once mastered the select all/cut/copy/paste keys can save time and effort. There is also a helpful ridge on the right hand side of these keys to aid with hand orientation. 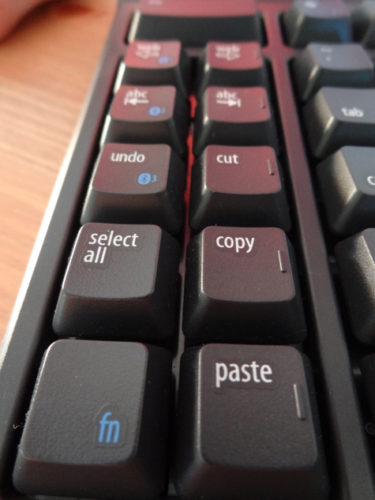 Overall the Freestyle2 Blue is a premium ergonomic keyboard with a design that fits its intended purpose. It is certainly not for general use, andÂ intended more for those with ergonomic requirements, or serious touch typists. Its sturdy, solid design which will appeal to those looking for these requirements in a keyboard.