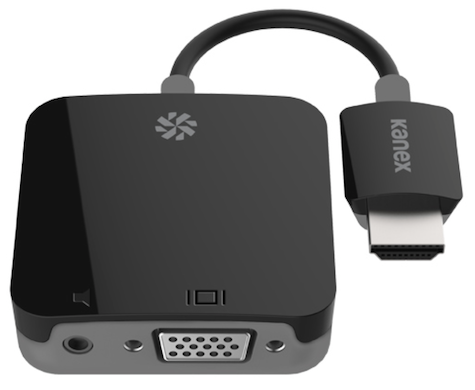 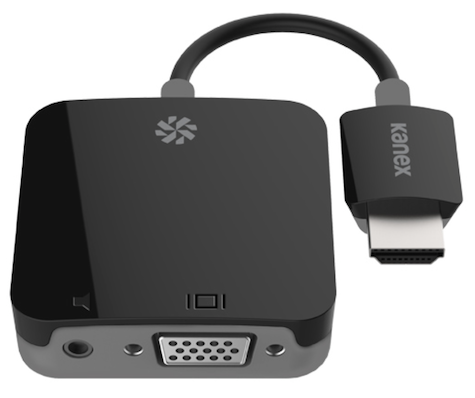 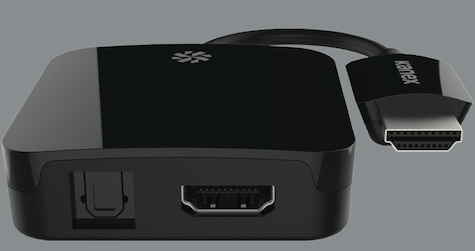 Kanex develops electronic devices for personal, commercial, and educational use. These two HDMI adapters make it possible to have good image clarity on older monitors and television sets along with modern sound quality. The adapters fill in the gaps between Apple TV and other streaming media devices, such as the Roku, and the older TVs and monitors you may have retired to your storage shed.

But be forewarned: you will scratch your head at theÂ  lack of documentation or instructions included or online. When it comes to figuring out what goes where and how, youâ€™re on your own, which is a serious lapse on Kanexâ€™s part.

The ATV Pro HDMI to VGA Adapter works with versions 3 and 4 of the Apple TV, plus recent Roku and competing streaming video devices. Plug the short Kanex HDMI cable into the HDMI port on your Apple TV, connect the included USB cable and power plug into a wall outlet, connect the VGA cable from a computer display or VGA projector, and your Apple TV content plays on the VGA equipment. Your remote control unit works as is always has done.

You want sound also? Provide your own speaker plus mini audio plug cable and plug it into the onboard audio port on the Kanex adapter. Headphones work, but there is no volume control on the adapter, so headphones with an analog volume control are best to use.

There are a zillion VGA computer displays in the world, plus a boatload of VGA projectors, in the dusty closets of businesses and schools. Give these VGA units a second lifetime with their new best friend, the ATV Pro HDMI to VGA Adapter for Apple TV (and other streaming devices).

Alert: You may get a HDCP error message on your VGA display using the ATV Pro with certain copy protected streaming content. Kanex explains:

HDCP is an acronym for High-bandwidth Digital Content Protection. High bandwidth Digital Content Protection (HDCP) is a system for preventing illegal copying of video data sent over a Digital Visual Interface. If you are unable to view material via the DVI input, this does not necessarily mean the projector or television is not functioning properly. With the implementation of HDCP, there may be cases in which certain content is protected with HDCP and might not be displayed due to the decision/intention of the HDCP community (Digital Content Protection, LLC). In the last two years Apples Software has become increasingly firmer on HDCP encryption, with every update blocking more and more.

The adapter is made for presentations, and screen mirroring, not for streaming videos from Netflix and other streaming sources.

Modern televisions, displays, and projectors have HDMI ports instead of or in addition to VGA and other legacy inputs. But HDMI equipment often lacks an analog audio out port. My Panasonic HDMI television has no audio out, and itâ€™s a pain in the analog. 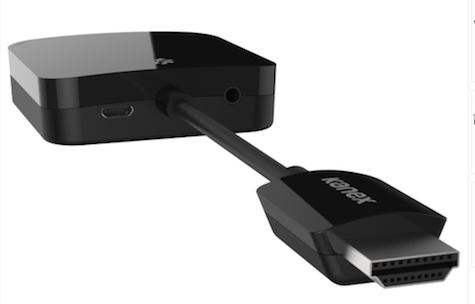 HDMI A/V Digital Adapter for Apple TV (and other streaming devices), sometimes called the Kanex Digital Audio Adapter, fills the gap, with both analog and optical audio ports onboard. Again, no volume control is provided, so be careful the first time you connect and blast your streaming sound to your home theatre system, speaker, or headphones.

Plug the included AC adapter and USB cable into wall outlet power and the USB port on this adapter, respectively, as with the VGA adapter above. Insert the adapterâ€™s HDMI port into the HDMI port on the rear of your Apple TV or similar device. Set up your audio equipment and use an appropriate cable (not included). Then, as with the VGA adapter, use your Apple TVâ€™s remote or compatible app to select and stream your media, as always.

Kanex gives purchasers no instructions whatsoever. You can draw your own conclusions regarding the companyâ€™s confidence in their customers, but I live and teach in the real world, where people just donâ€™t get it, no matter what is the it.

I hope Kanexâ€™s customers are all setup wizards. Otherwise, I hope the companyâ€™s tech support and customer service departments are as good as their solutions to problems created by gaps in other companiesâ€™ equipment.

The company rep tells MyMac: Kanex made the ecofriendly decision to save paper and includeÂ a diagram on the box that shows an image of how to â€œplug and play.”