The following long essay was written in response to recent TechFan episodes in which the new Star Wars film was discussed. 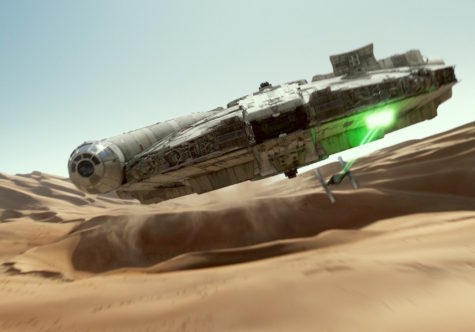 After watching â€œThe Force Awakensâ€ a number of timesÂ and having listened to recent episodes of TechFan where you’ve discussed the film, Iâ€™ve had a bit of time to reflect upon my thoughts about the new film.

Let me preface my comments by stating for the record that I am an unabashedly huge Star Wars fan. I attended opening day for â€œA New Hopeâ€ in 1977 and have been hooked ever since. Even my science lab/classroom is filled with Star Wars memorabilia. Iâ€™ve included a couple of pictures of my desk at school so you can see just how important it is to me. 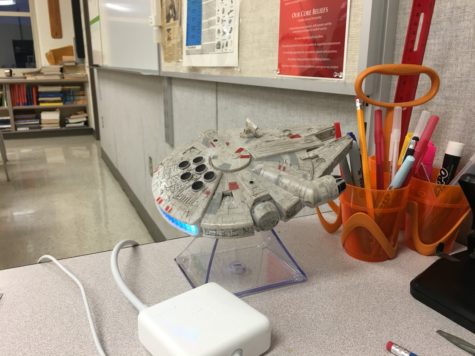 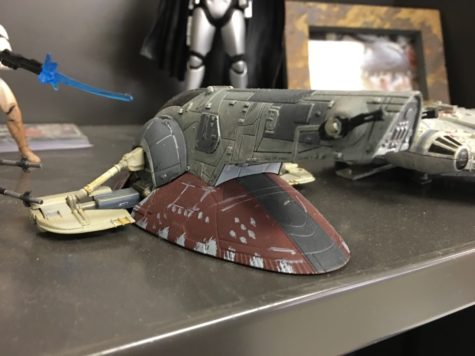 Star Wars is magical, and Iâ€™ve waited thirty two years to see Han, Luke, Leia, Chewie, and the rest of the cast bring it back to us. As the words â€œStar Warsâ€ blasted onto the screen with the opening crawl for â€œThe Force Awakens,â€ I had a huge smile on my face. I felt 12 years old again. I was about to see the heroes Iâ€™ve watched for my entire adult life back on the big screen.

I have to say that while listening to you guys critique the film I felt kinda’ sad because it seemed to me like some of the magic leaves us when we look at the film while wearing our critical glasses. I had my â€œfan glassesâ€ on and my first impression is that the movie is a fun experience. Star Wars was fun when we were kids and thatâ€™s how I try to look at it today. You have to throw aside reality when watching it.

When I see all the folks on forums complaining that â€œThe Force Awakensâ€ is just a big copy of â€œA New Hope,â€ my attitude is â€œGood! Iâ€™m glad to see it!â€ Why, you ask? Well, first of all, â€œA New Hopeâ€ was the source of the magic that Star Wars represented to millions of young fans in the 1970s and 1980s. We are those fans. We are its legacy. The movie was the foundation of the entire franchise. What better homage, what better foundation for the new generation of films and story lines than following the same recipe that started it all?

â€œThe Force Awakens” borrowed elements from â€œThe Empire Strikes Backâ€ and â€œThe Return of the Jediâ€ as well. Star Wars movies and books follow a distinct storyline, a rhythm, a pattern so-to-speak. So does â€œA Force Awakens.â€ As it should I say! â€œThe Force Awakensâ€ is a continuation of the previous six films. It has to have some of the same elements that made them great in it. 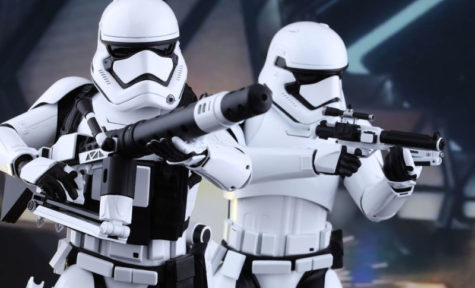 Folks complained about the prequel trilogy because it was â€œtoo differentâ€ from the original trilogy, and now theyâ€™re complaining because â€œThe Force Awakensâ€ is too similar. There are many similarities to the original trilogy in â€œThe Force Awakens,â€ but as I look at the film more closely I see many distinct differences. This film definitely requires multiple viewings to truly appreciate it and all the subtle elements Abrams has incorporated into it.

Borrowing the elements from previous films that made them so great is a fitting transition to the new and upcoming films, which I suspect will take on a life of their own and make Star Wars even better than ever. I have no problem with this.

Some complaints about plot holes in the movie are answered in the newest books that are now canon. I wonâ€™t spoil those. You have to read them. At the very least you can figure out some of the answers from the readings. Should you have to read the books to understand a movie? Absolutely not. I will sayÂ  that the original trilogy had many huge mysteries in it too. That didnâ€™t bother me. It was appealing.

Remember as kids talking about what the true story might be? All the times we talked about Vader being Lukeâ€™s father and how that came to pass? Thatâ€™s part of the Star Wars mythos. It took us three movies to figure out that Luke and Leia are siblings. It took two movies to figure out that Darth Vader is Lukeâ€™s father, Anakin. Why is Yoda in that swamp on Dagobah in the first place? It took five movies to figure that out. Why is Obi Wan hiding in the deserts of Tatooine? Six movies. Those are two of the most powerful Jedis ever, in hiding. Why? We didn’t really know at the time. Whatâ€™s Hanâ€™s past with Lando? Itâ€™s only subtly hinted at. The list goes on, but the mysteries are what keep us coming back. We want to know. Thatâ€™s part of the appeal of Star Wars and is why it can go on for seven plus episodes.

Critics wonder why the Starkiller Base was added. They say itâ€™s just a copy of the Death Star. Yes, it is. Yes, it looks and functions similar to a Death Star, but consider how weapons are designed and developed in our world. We take what works and we develop it further, trying to improve it with each iteration. The same is likely true for the Death Stars. They had a weapon that could blow up an entire planet in a single shot.

Would they say, â€œDamn, the rebels blew it up, we probably shouldnâ€™t build a bigger and better one.â€? Hell no! They would, and theyâ€™d make it even more powerful.

They have a weapon powerful enough to suck up the energy of an entire star to destroy entire solar systems of planets. Itâ€™s not at all scientifically possible, but this is Star Wars. Itâ€™s a fantasy. Let realism go and just enjoy the movie. Thatâ€™s saying a lot for me, because Iâ€™m a science teacher and trained in all four branches of science!

I donâ€™t think it detracts from a film where people jump around a galaxy using hyperdrives and swinging lightsabers. I just have fun watching it unfold and imagining a different and more exciting universe.

The origins of the First Order seem easy to explain. I suspect that Supreme Leader Snoke is actually Palpatineâ€™s former master, Darth Plagueis. Darth Plagueis was a powerful Sith Lord who â€œhad power over life itself,â€ according to Palpatine in Episode III, â€œThe Revenge of the Sith.â€ Palpatine could have easily been fooled into thinking Plagueis was dead after his assassination attempt on his master. 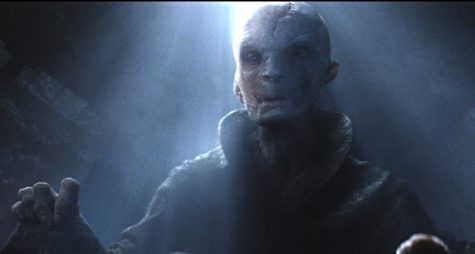 The Outer Rim of the galaxy has always been described as wild and vast; a place to easily hide an army in the making and one that could have been built with the vast fortune amassed by a character such as Darth Plagueis. Snoke even mentions having watched the Empire â€œrise and fall,â€ which Plagueis could easily have done as he awaited his chance to return once again.

The fact that Luke went into hiding after Kylo Ren turned to the dark side of the force and killed off his padawans with the help of the Knights of Ren isn’t all that surprising to me. Yoda and Ben did the exact same thing when the Jedi Order was decimated by Palpatine and Anakin/Darth Vader. They were two of the most powerful Jedi and what did they do? They hid and awaited for their moment to make an impact. Just like Luke is now, I suspect. Yes, it is a different situation in some ways, but the similarities are pretty striking.

The next movie should reveal more about this story arc. Luke has always followed his passions and emotions, as Tim stated. The were even points in â€œA New Hopeâ€ and â€œThe Empire Strikes Backâ€ when Luke seemed downright whiny at times, especially when being trained by Yoda.

The devastation of having lost his nephew and all of his padawans to the Knights of Ren must have impacted him deeply. I can easily see how his grief and the realization that he alone is most likely not powerful enough to stop Kylo and the rest of his knights would make him retreat to hopefully fight again another day. Maybe he hid Rey in the desert to protect her from Kylo/Ben much as Obi Wan and Yoda did with him as a child.

It would seem that she was left with a bunch of slavers, which appears pretty damn heartless, but Iâ€™m sure that story will develop further and weâ€™ll discover more about what happened.

Iâ€™d argue Harrison Fordâ€™s portrayal of Han Solo was spot on. It may have been his best performance as Han to date. As my favorite Star Wars character, his death was a punch in the gut. At first glance, I felt his death seemed senseless, since it seems to have reinforced Kyloâ€™s embrace of the dark side of the force. Maybe not though, perhaps Kylo will use that to somehow embrace the light side of the force and help defeat Snoke making Hanâ€™s death worth the sacrifice. I think the true impact and effect of Hanâ€™s death wonâ€™t truly be felt until the conclusion of Episode IX. 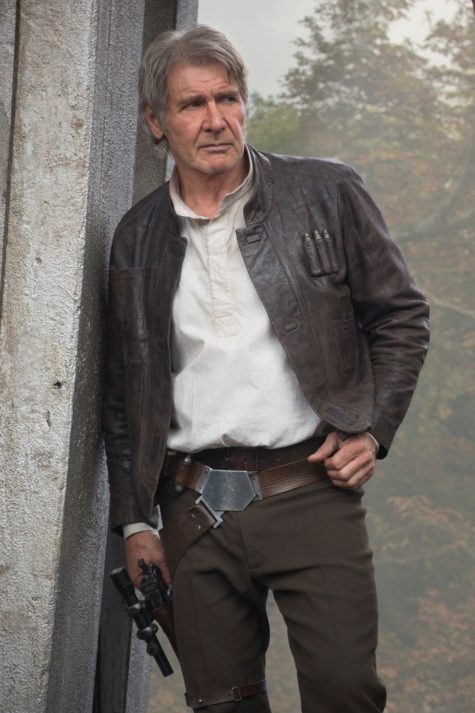 Rey and Finn were the bright spots of the film. Their characters were believable, funny, and heartwarming. They have a great chemistry together. In my opinion, Rey is Lukeâ€™s daughter. The flashbacks and force-induced visions she felt when touching Lukeâ€™s lightsaber are all reminiscent of Lukeâ€™s past, not Hanâ€™s and Leiaâ€™s. To me, her force abilities are coming from Luke. 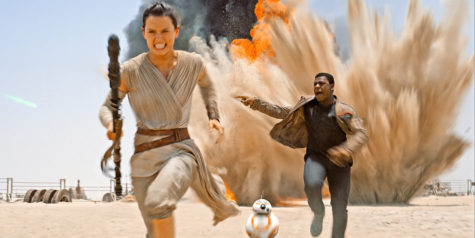 Kylo Ren is a unique character. Heâ€™s portrayed as very unstable, just as his lightsaber seems unstable and on the verge of losing its cohesion. Heâ€™s prone to fits of rage. All of this reflects the conflict inside him as he tries to balance the light and dark sides of the force. Part of me wants to hate him for killing Han, but another sympathizes with him for his conflicted nature. His character development will be interesting to watch. Chewbacca nearly mortally wounded him with his bowcaster, so weâ€™ll have to see how he fares in the upcoming films. He represents to me a gray area in Star Wars. Itâ€™s truly the first time weâ€™ve seen a character being pulled toward the light side of the force in a significant way. Darth Vader was in end, but it’s different with Kylo Ren. 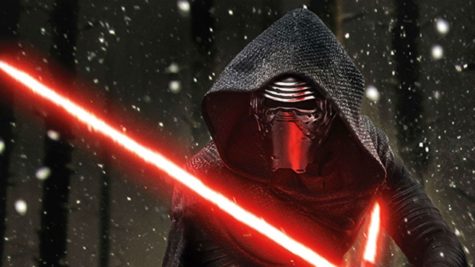 As the movieâ€™s title states, the force â€œawakensâ€ in this film. Snoke sees it coming, and I think he is referring to Rey when he states such. You see it happen during Reyâ€™s lightsaber battle with Kylo Ren. She surges with the force as the battle progresses. Shortly thereafter, R2-D2 awakens, showing the metaphor of this awakening that is happening. His behavior going into â€œlow power modeâ€ with Lukeâ€™s absence is believable. In â€œA New Hope,â€ Luke comments to Obi Wan that heâ€™s â€œnever seen such devotion in a droid before.â€ R2 is unique and it just wouldnâ€™t be a Star Wars film without him, no matter how brief his appearance.

We will be looking at this film and all of its nuances for years to come, just as we have with the other films. I look forward to that. I know that Abrams and the rest of the crew that made â€œThe Force Awakensâ€ are huge fans of the franchise and did their best to do it justice. Theyâ€™re never going to please everyone. Itâ€™s impossible to do so. I do think that theyâ€™ve laid a groundwork for the upcoming films in the series. Iâ€™m happy to have seen it and as I write this Iâ€™m getting ready to head out the door to go see it in IMAX for that experience, and to get the free poster! 🙂