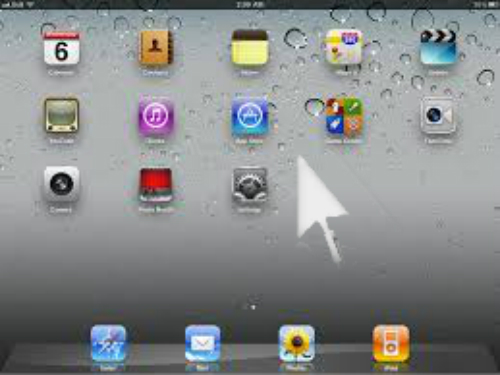 Guy wrote a MyMac opinion piece about the iOS Desktop: Time for it (to) happen(?)

I have some thoughts of my own on the matter and so I decided I would put them down and see what you all make of them. I will point out that his original title is at the least missing the word to, and possibly a question mark.

Rather than write a complete article discussing it from my own point of view I thought it isÂ more relevant to put forward my thoughts on particular comments fromÂ his piece.

â€œIt has most of the capabilities that probably 90+ percent of people that use or need a computer from home actually require.â€

This is something I have maintained for many years. Why do people buy expensive PCs and Macs? Do they really need all that power? I don’t think so. For many years the vast majority of home users treated computers as glorified typewriters. They perhaps kept a few spreadsheets, a simple database or two, some photos, and their iTunes music on it. Some people played games, and in my view, games were one of the few reasons to bother having a powerful computer.

Since the birth of the “popular Internet” things changed a bit. Now the main reason the average user wants a computer is to be able to do all those original things and get on the internet.

Web access is now the biggest part of computer usage. Today itâ€™s online everything. At the same time, computers have more raw power than most casual users need.

I am 100% with you on this part Guy. Before the iPhone I had fantasized about some sort of pocketable “thin client” device. Something like an internet connected Nintendo DS or old Psion that could do most internet basics and utilize a home Mac to access files.

I am sure that the early Smartphones (Blackberry, early Windows Mobile devices, Handspring Treos, and even Netbooks) were born from the same realization. As Steve pointed out, most people don’t really need a powerful PC, just as most of us don’t need to own a truck. So yes, most people could do what they do on less powerful machines, especially as hardware now is thousands of times more powerful than that of even a decade ago.

“The point is that Apple has created a new ecosystem of hardware and software that people seem to like and are willing to spend more on than competing platforms.”

I am with you on that. Android has a larger installed base and more active devices. But that can be everything from the cheapest phones and tablets up to the flagship devices that cost as much or more than Apple’s offerings. I think that the average iOS user is probably more satisfied with the ecosystem than the equivalent Android user. iOS users also tend to be more invested in the hardware too. However many Android users are there because they are “more price sensitive”. So yes, there is a possible market here.

“Would it surprise anyone at all if Apple had a few ARM-based desktop machines running a version of iOS that had many features of a desktop machine?”

Not at all, Guy. Don’t forget that long before ARM became the darling of the mobile device industry, the original ARM chips and philosophy birthed the Acorn series of computers and the BBC B Micro. I donâ€™t doubt that Apple has some prototype ARM-based machines running OS X, iOS, and probably some hybrids with future operating systems. If an Android/Desktop hybrid or a Chromebook can be made then so can a version of an iOS desktop.

“On the face of it, costs for development would most likely be pretty low. You would need probably two different kinds of iOS device docking stations: one for iPads and one for iPhones. Each should have a flexible bay to accommodate different sized devices. Then you would need a pure iOS desktop machine. Maybe even a laptop-sized docking station with a built-in screen.”

I agree that the development costs of hardware might not be very high. That might be good because I see one flaw in your proposition. The form of the iPhones and iPads have changed slightly with each iteration even though the essence of the original designs remain. That doesnâ€™t even include the switch from 30 pin to Lightning ports and the rumored elimination of the audio jack.

My quibble here is what exactly are you aiming to do? Are you suggesting that we buy into ever more powerful and personal iOS devices that will become our whole computing life? That we then have a variety of shells into which this device can be plugged? If you are, why not just have a core and then the iPhone, iPad, Laptop, and Desktops can all be shells. (I canâ€™t see see this happening. But if it could, it would be the iPhone that was the core and everything else would be a shell).

My problem with this concept isn’t that it can’t work, but that with a variety of sizes and forms for the iPhone and the iPad already, the shell concept becomes pretty messy. That’s before you consider people’s love of cases, battery packs, folio covers, etc. Â I can see it working a lot better for a desktop installation because all you need there is an interface. A way to make the device become the heart of another system.

Alternatively, are we talking about creating iOS helper devices that contain their own hardware with additional RAM, GPUs, or the like?

In that case you are, in effect, creating new hardware that might just as well have an iOS heart and be sold as a standalone device. I have difficulty seeing Apple embracing the whole philosophy behind it. Jony and Tim have made it pretty clear that they think Desktops are Desktops, Laptops are Laptops, etc. I think you might find their answer to an iOS Laptop is, â€œWe already make one. It is called an iPad with a keypad coverâ€.

I know that isn’t what you have in mind Guy, but I think Apple would see this as being much too messy.

“To prevent a mass panic from existing Mac users, most of the user interface from OS X would be available on an iOS computer but simplified. A simple file manager perhaps based on documents or content type vs applications.”

This is where I don’t agree with you Guy. If you are going to make an iOS desktop, it needs to be a ramped-up version of what iOS can do. Even if some parts of that functionality are only available/triggered when docked. It shouldnâ€™t perform as some sort of watered down version of OS X. I know if I was asked to make some sort of FrankenOS like that I think my personal response would be, â€œIf you want/need OS X features you need an OS X device”. I think an iOS desktop mode is a viable concept.

You already pointed out that out of all iOS devices sold, a large proportion belong to people who have never used a Mac. In that case why do they need the desktop mode to be like OS X? You or I might find that comfortable, but we aren’t the target audience. I think that is actually the wrong direction to be going. I imagine more of the slide-over and multi-pane UI features iOS users are familiar with. I say for the 90% we want to move away from the traditional desktop metaphors wherever we can.Â In my personal experience, as my iPhone becomes capable of doing more and more, I use my MacBook Pro less and less.

I think this is the point is where you lost sight of your original proposition. I suspect you (much as I did as I read this piece the first time) started to project your own requirements onto the concept. But you, and I, and most of the MyMac audience, are not the 90% of the population we are talking about.

What you need to aim for is that if something is adequate for 90% of people then you already have the market. That last 10% needs the power of the next step up.

As I see it is to say that Apple should expand the range of form factors they offer for iOS and perhaps expand its capabilities a little to accommodate that and most of all to PERSUADE people that they REALLY can get by with just their iPad or “iOS Book” or iPhone or desktop iOS docking station. If the objective is to acquire more customers, or to sell more products, then youâ€™d want to wean average users away from the idea that they NEED a PC at all.

“Docking stations, whether through a wired interface or with the iOS device inserted, should have some of the more standard ports used at the time of release.”

I agree with this – but only inasmuch as if you are going to expand iOS a bit into a desktop it really does need to be able to access more standard peripherals a lot more elegantly than via a nasty set of adapters and dongles. In my view if you are trying to make an iOS “desktop” that is a complete given but you are probably drifting beyond the needs of the 90%. Then again there is an argument that says if a small enough set of additions make it work for 95% â€” the problem with that argument is usually ROI. If you are adding features that 90% or more of potential users will never want/need/use they are probably increasing the cost and thus reducing your potential customer base.

As the new Macbook shows Apple seems to want to go as close to “portless” as they can get. I think their ideal would be a Mac or iOS device with basically NO ports at all. [Minor off topic aside: I sort of “get” the USB C thing – but I deeply love my MagSafe and I think it’s loss will be a very sad thing].

â€œThe vast majority of people that use iOS devices are not on Macintosh computers. The high cost of admission is probably the biggest hurdle. iOS desktop computers could likely cut that cost in halfâ€¦.â€

I know exactly where you are coming from Guy, and I think if it is going to happen Apple will do it by expanding their iOS range to include some sort of “iOS Book” (although to me that is the iPad with a keyboard case) and perhaps an iOS “Box” similar to the Mini and run this as the “consumer range” and pitch the Mac OS very much more as the “professional range”.

In my view we have to keep sight of the fact that the whole point is that most people don’t really need a PC. Once some of us hoped to own a desktop, then we moved on to wishing we could “trade up to a laptopâ€. Then the real Mobile Computing/Internet Everywhere thing happened and a lot of people found that a smart phone or a tablet was actually really all they needed.

I know increasing numbers of people who are now foregoing a computer altogether, mostly by just not replacing their old one when it dies because “I used it so rarely at the end, and I just seemed to find the iPad could do it all for me”.Â  Although I think there are some merits in the idea, I think Apple won’t go there, except perhaps by positioning iOS more and more as the “everyday OS” and aiming the Mac towards the “specialist/professional OSâ€, thereby promoting its Macs as the Racing Cars and Trucks and its iOS products as the Compacts, MidsizeÂ Cars, and Family Vehicles of Steve Jobsâ€™ analogy.

Listen to the GMen discuss this topicÂ in the middleÂ sectionÂ on MyMac Podcast 600.