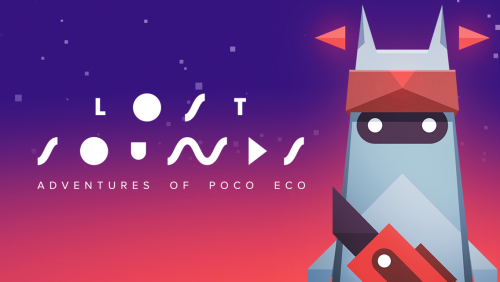 Once upon a time, games in iOS were deeply criticized for being bad, annoying, In-App-Purchase generating machines. This was largely accurate, and remains largely true today. But in 2014, a game called Monument Valley punched a hole right through the theory that iOS games had to be this way to succeed. Instead, it focused on beautiful art, deeply rich audio effects and music, outstanding logic puzzles, and inscrutable yet intensely relatable characters.

It may seem strange to you that the first paragraph of a review about a game released in March, 2015 called Adventures of Poco Eco: Lost Sounds is about a different game released almost exactly one year earlier, but there’s a logical connection. Monument Valley showed the world that art and playability were not exclusive to each other, and that people would respond to being stimulated mentally with challenging puzzles, visually with gorgeous art, and audibly with rich, emotional sound effects and music. Adventures of Poco Eco: Lost Sounds is a game that very much exists in the tradition of Monument Valley, and one that seems clearly influenced by it.

I also think that the creators of Adventures of Poco Eco themselves made the comparison inevitable. Besides the mechanics of solving navigational puzzles and immersive background soundtracks, Possible made the game’s website very reminiscent of Monument Valley’s, right down to the way the list of awards is laid out. Additionally, both games feature totem characters and involve returning lost items to their rightful owners. I can’t escape the conclusion this was all intentional. The problem with associating yourself with the style of another game is that it can work well for you, or it can backfire. In my opinion, it does a bit of both in the case of Adventures of Poco Eco. 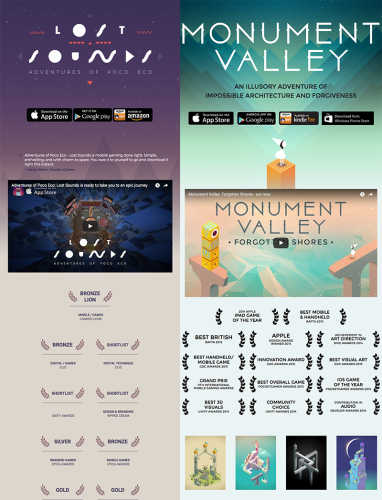 I’m bringing all this up for a reason: if you’ve played Monument Valley, then Adventures of Poco Eco is going to immediately seem familiar in some respects. Just don’t expect it to be the same, because it’s not. For one thing, Adventures of Poco Eco: Lost Sounds is very much focused on the audio experience and corresponding visual beauty, and less so on the logic puzzles.

So if Adventures of Poco Eco is not Monument Valley, what is it then?

The game starts with Poco Eco, dejected and sad, walking around a nicely rendered 3D landscape. He stumbles across a cylinder that reveals a cassette tape player inside. It attaches itself to him, then earbuds magically appear and install themselves in his ears (or near them, actually), and the game is afoot. Noise must be banished and music restored to the world of Poco Eco. 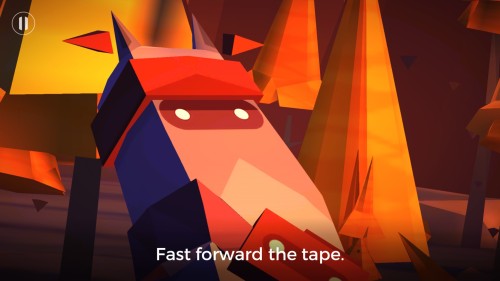 Poco Eco’s journey to restore music to the land involves a lot of walking and figuring out obstacles. Again, this may sound familiar. But the puzzles aren’t the main focus of the game, as far as I can tell, nor are they the most successful. Indeed, Poco Eco is accompanied by LEDBUG, a glowing, flying companion who almost always shows you exactly where Poco Eco needs to go next. This is both good and bad; good because sometimes the environment design is just ambiguous enough that you’d fail to see your objectives otherwise, and bad because it makes the game feel as though it’s on rails (which it is). 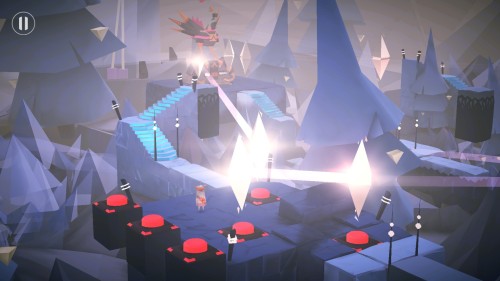 The most annoying part of LEDBUG for me is that it is either too close (usually) or just disappears offscreen when you really need it most (occasionally). Because you, the player, cannot rotate the game perspective and look for things just out of frame, that can be frustrating. In fact, many times I really wished I could just spin whatever structure or mountain I was on around to see something I needed to see. Instead, the game adjusts your view for you, and not always how you would have chosen to have it done.

The mission spans 15 levels, all of which provide unique scenery, sub-story, and navigational challenges. Again, none of these are difficult. Each level will literally take a few minutes, and none will ever require Googling to see how someone else solved it. 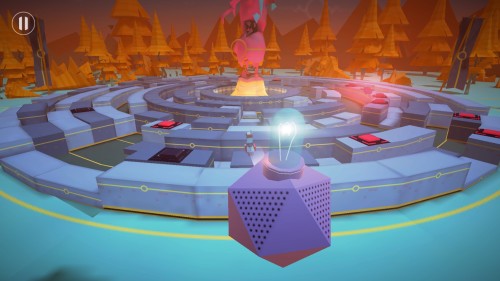 Since, for me, the puzzles and the gameplay aspects of the game are its weakest points, I’m just going to gripe about them now and get it over with so I can move on to the positive. I’ll just state it plainly: the gaming part of Adventures of Poco Eco, the mechanics of navigating, the quality of the puzzles, and the level of mental involvement required felt like a bit of a letdown to me.

For one thing, navigation can be frustrating. Want to go to a specific point? Great! Tap there! Just don’t be surprised if for no reason Poco Eco stops and requires several more taps to get to the block you were targeting. Or if there’s an obstacle in your way blocking the square you need to land on and are trying to tap behind whatever it is that’s in front of it. While not frequent, this happened enough that I found the lack of ability for me to adjust the viewing angle of the scene odd. Nothing stopped me from continuing, but I had to laugh a couple times when things were interfering in a manner that seemed completely unnecessary.

Secondly, the puzzles aren’t up to par in terms of challenge. Maybe that’s not fair if the intended audience is younger people, such as children. I plan to put in on my daughter’s iPhone soon and see if she is happier playing it than I was. If she really gets into it and likes it and doesn’t feel like she’s getting stuck or can’t see the point, then I’ll have to rethink my opinion and instead view the game based on its appeal to younger gamers. For me as an adult, the gaming part of it is unsatisfying. I realize that may not be the point of this app; but the puzzles are there, and if they’re there, they should be satisfying. Certain parts of a few levels felt like busywork more than a well thought out gaming construct, while other levels are much more well done.

I’ve bashed the gameplay a bit, and that’s fine, except a lot of people really like this game based on other reviews and by the ratings in the App Store. One could reasonably conclude that either I’m a grumpy old man who doesn’t know a good game when I see it, or it could simply be that for most people the redeeming features outweigh the parts of the game that aren’t as outstanding.

In Adventures of Poco Eco: Lost Sounds, the redeeming features are the graphics, world design and modeling, and the audio. Both eye and ear candy are very nicely presented. There are portions of Poco Eco where I look at the rendered scene and think “this is incredible, how come I don’t love this game with all my heart?” Equally, the music is appealing, especially in later levels. This is no surprise: the game was created by Possible Games in cooperation and partnership with Iamyank, a Hungarian musician who definitely knows how to produce enjoyable music.

These two aspects of Adventures of Poco Eco are worth the price of admission, and indeed cause the imagination to run wild with what this game could be. The Sequencer Room was my favorite part of the game. I wish they’d included more elements like this, and fewer like the Salty Lowlands. It feels like they hit their stride right as they were wrapping up the game conceptualization phase. 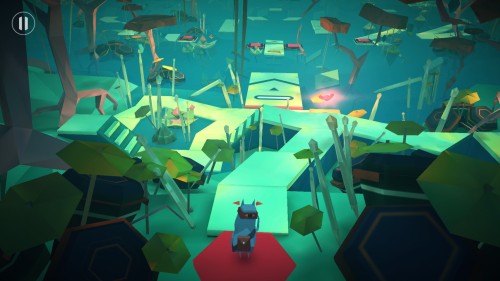 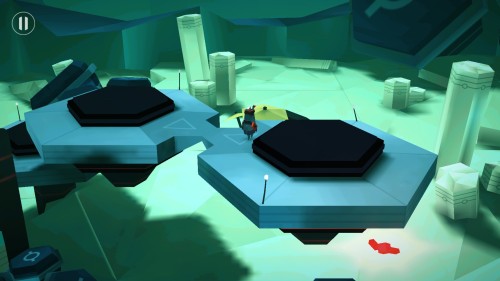 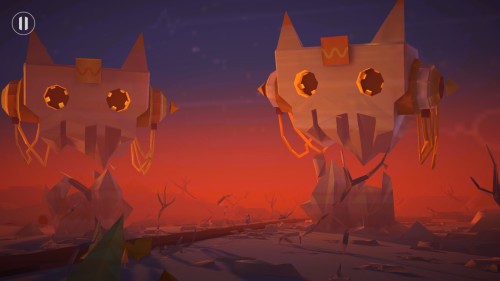 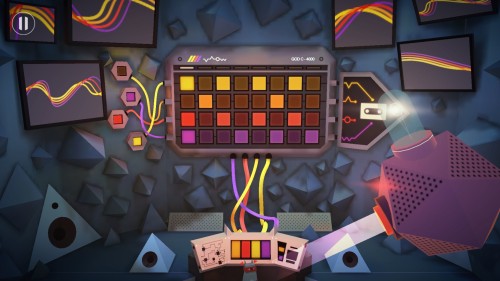 I actually feel bad not rating this game more highly based solely on the skills the game authors possess as designers. These are clearly very creative people who put a lot of effort and care into this project, and I hope to see more from them in the near future. But the bottom line for me with Adventures of Poco Eco: Lost Sounds is that the gaming aspects feel limited and simplistic. Combined with sometimes nebulous control of Poco Eco while navigating, this lessened my enthusiasm for this app, and in the end, I just couldn’t ignore that. It is a game, after all, and I really wanted it to succeed better on that level.

Adventures of Poco Eco: Lost Sounds is a universal iOS app, requires iOS 8 or later, and is currently $2.99 in the iOS App Store.