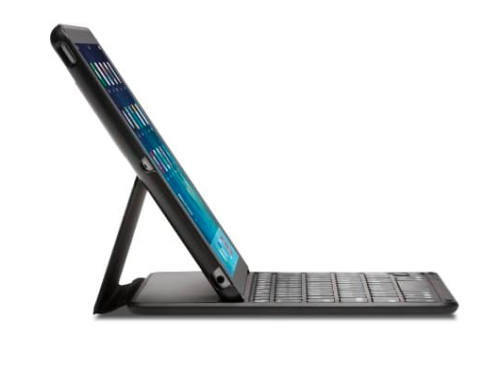 When iPads were first introduced by Apple I bought an original iPad and then later moved to an iPad 2. At the time, the thought of using an external keyboard to enter information into an iPad, was a novel idea. Back then, I got my hands on a pre-release keyboard case from a company called Kensington. It was a wonderful concept at the time and since that first case the good folks at Kensington have continued to refine their Folio line of keyboard cases for iPads.

Today, I am the proud owner of an iPad Air 2 (Yeah, I still have my iPad 2 and use it for work) and I am typing this review on the latest Kensington iteration of their Keyfolio line of products, the Keyfolio Thin X3, hereafter referred to as the KTX, using Apple’s Pages word processor.

The KTX touts these features: Integrated Bluetooth Keyboard, Keysense Power Channel, Powerlift phone charger, and the Quickfold design. I will cover each of these features in detail below but first lets talk about the initial setup.

The first thing I did was plug the included USB charging cable into the KTX to give it a complete charge. Kensington states you will get 1000 hours of working time, and 900 days of standby time. Neither of these specifications was tested by this reviewer. I received this unit several months ago, and have not charged it since. The KTX provides a method to check the charge. The keyboard includes a battery key next to the space bar, once pressed, an LED just below the power channel will glow green if the charge is greater than 50%, yellow if the charge is between 20% and 50%, and red for less than 20% power. The keypad power shuts down when you remove the iPad from the power groove.

Connecting via bluetooth was pretty simple. Turn Bluetooth on using the settings app on your iPad and then press the pairing key on the KTX. The KTX will appear in the bluetooth settings box on your iPad and you press it to connect. Once paired, you won’t have to pair again.

Next, snap your iPad into the KTX and then you position it in the Power Channel. 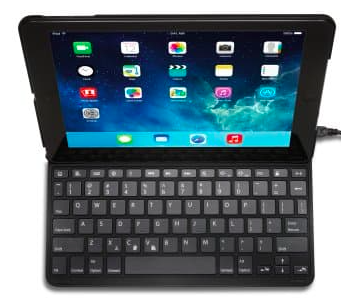 The downside with this setup is you only have one angle. Period. Sitting at my desk in my home office, I find I have to tilt my head to look down at the screen. Placing the KTX in my lap I was able to angle the screen up but it made typing a bit more difficult.

There are six rows of High Performance Scissor Keys that feel very comfortable to type on. The spacing is good, but don’t expect these keys to feel like a full size keyboard. Having said that, you have to remember I am describing a full keyboard that is set up inside an iPad case. 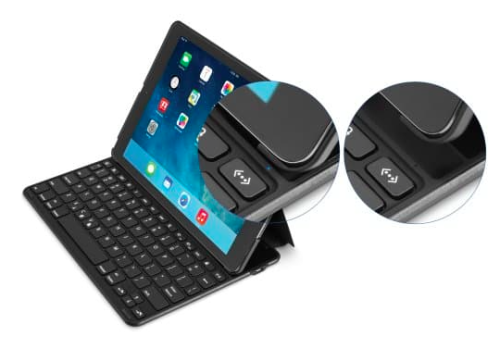 What is excellent are the special keys included in the layout.
Specifically:

Home Key: Always takes you back to the iPad home screen. Pressing the home key twice brings up the application switcher.

International Keyboard Key: Allows you to toggle between different language keyboards you may have installed.

Keyboard Key: When you using an app that requires keyboard input, this key makes the iPad keyboard slide up from the bottom if you want to use it instead of the KTX.

Application Switcher: Besides using the home key there is a dedicated key for launching the application switcher.

Lock Key: This key puts your iPad in lock down mode and requires a passcode or fingerprint scan to reopen.

Finally, there is a Pairing key that you can use to launch the Bluetooth connection process between the KTX and your iPad.

The full keyboard also has Function, Control, Option, and Command keys that allow you to use the familiar Mac OS cut and paste functions. Additionally you also have four cursor keys and two of these can be used with the Function key to “Select right word” and “Select left word” when inside a document.

The KTX comes with an adapter that plugs into the charging port that features a USB connector on one end. Kensington calls this feature PowerLift. Using the Powerlift technology allows one to connect their Smart phone to the USB connector and use the internal 1650 mAh battery to grab a quick charge in a pinch. That is the only thing you can do with this connection. 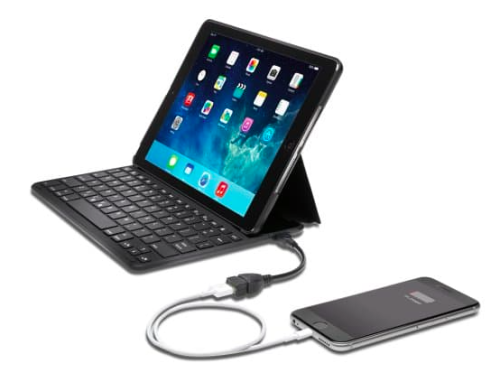 Closing the case powers your iPad down and provides very good protection.

Conversely, using the Quickfold option disconnects power from the keyboard and folds your iPad over the keyboard for regular iPad use.

I have used previous Kensington keyboard case implementations and I think this is their best version to date. The full keyboard is comfortable for its size, the keys are responsive, and I like the special keys and layout in general. I don’t like the single viewing angle but don’t really see how this could change since the angle is dependent upon the power groove.  I am not sure I would be using the PowerLift feature, but it is there if you need an emergency charge. 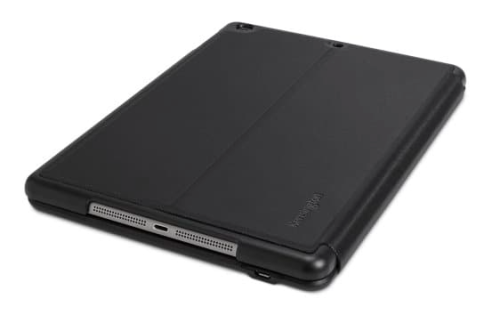 As a case, the KeyFolio Thin X3 for iPad Air 2 does add weight to your iPad, but the trade offs are iPad protection and the full keyboard. Rather amazing how the folks at Kensington were able to keep this combination case and keyboard as thin as it is. All iPad ports and buttons are easily accessible.

If you are looking for this combination of case and keyboard, I can highly recommend this product.