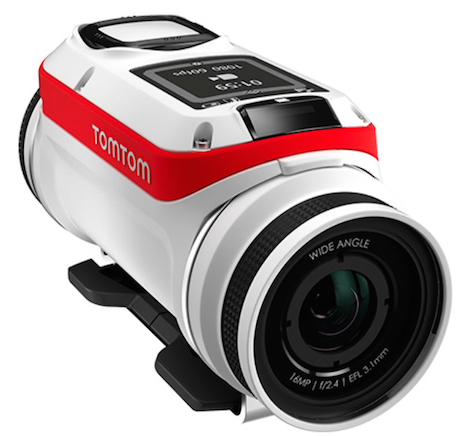 TomTomâ€™s new Bandit Action Cam is a fully self-contained personal POV (point of view) Wi-Fi enabled camera. You can use it as a solo purpose device, with no smartphone required, andÂ to take full advantage of it the TomTom Bandit iOS app is required.

Bandit comes with a 16GB MicroSD card plus two base mounts with double sided tape to attach to your choice of smooth surfaces. The base segment has two parts: the mount and the cradle. The cradle attaches to the camera via the slots in the positioning rings on both ends of the camera. There is also a remote control unit available that you strap to your wrist to start and stop recording with a single press of the singleÂ button.

The camera itself is fairly basic. The lens is fixed and can only be adjusted automatically, which is good for an action camâ€™s purpose. There is a clear cover secured over the lens that protects the actual assembly and is somewhat water resistant.

On the top of the camera are two indicators: a display and the controls. The indicators are orangish red LEDs that tell you whether you are recording or not. There is a 3/4 inch square backlit LCD screen. If there is a way to adjust the brightness of the screen I could not find it.

On this screen you can do practically all the same adjustments and configurations as when using the app, with the exception of viewing your still pictures or video. The screen will also display the Wi-Fi password and network name you must connect to for the app to communicate with the camera.

The basic modes of the Bandit are video and photo, and these can be broken down further. For video there is video that will record HD (720p) at either 60 or 120fps (frames per second) and trueHD (1080p) at 30 or 60fps. Slow-mo is good for action shots to see details in moving objects, and this mode has resolution of 1080p at x2 speed, 720p at x4, and WVGA at x6 for frame rate options. Time lapse gives you various resolutions and a choice of frame rates from 1 per second up to 1 per 5 seconds. A cinematic option allows recording at 2.7K at 30fps or 4K at 15fps.

The photo options are either a single photo or burst mode that allows a stream of up to 10 pictures to be taken. The photo portion seems to me to be the best use of the remote as you do not need to reach for the shutter button on the rear of the camera and potentially knock the camera’s alignment off and miss the shot you are trying to take.

The iOS Bandit app brings the whole device to a different level. With the iPhone app all of the settings are available as well as a viewfinder display.

If I skied or did any kind of extreme sport I would get one of these TomTom Bandits in a second. The cameraâ€™s physical build elements are robust and modular. With the accessory lens protector I believe this camera is waterproof. (Iâ€™m not willing to test the current lens as I have to return the unit fully-functional).

There was an issue with deleting videos off the MicroSD card where the app would hang. Not sure if this was a firmware or software issue as there was a patch issued in the middle of testing.

I give the TomTom Bandit an 8 out of 10 MyMac.com review rating.