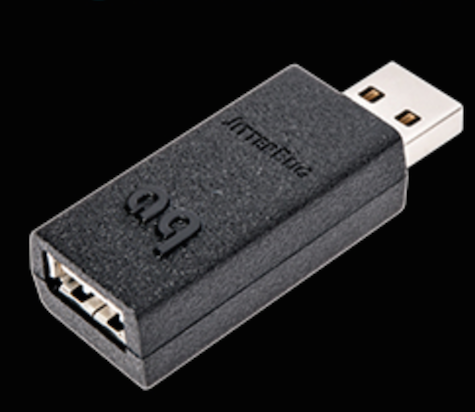 From my description above, you can see that the computer DAC plugs into the JitterBug, whereas in the portable scenario the JitterBug is plugged into the DAC. In both cases though (using the AudioQuest DragonFly DAC for the computer example), the headphone or speaker system is connected to the output of the DAC, with or without an additional power amp following the DAC’s output. I can’t describe the theory behind this JitterBug device, because the trade secrets are proprietary, so I’ll just say that it’s a passive device that doesn’t seem to require additional power from the system to operate. That’s important for most portable devices thatÂ run on battery power, but also important for USB DACs that operate on USB power alone.

Although the JitterBug is passive, and I haven’t seen a lessening of volume output when inserting it between my iPhone 6 Plus and my Oppo DAC/amp, I did experience some issues with my PC computer’s music player (Foobar2000) and its buffering scheme when plugging a second JitterBug into a second USB port. At this time I can only assume that the ports on my hand-built Windows XP computer are not on separate buses as I (erroneously) expected for the second JitterBug.

The second JitterBug isn’t necessary, but it’s been suggested as a possible way to reduce digital anomalies further than when using one JitterBug alone. My Macbook 12-inch (2015 edition) has only a USB-C port, and I don’t have an Apple-approved USB splitter as yet, so I’m not able to use-test two JitterBugs on that computer. I’ll update this review when I’m able to test fully the Macbook with JitterBugs.

My impression of the sound using the JitterBug with the PC and Mac computers is essentially the same for both. There isÂ a subtle increase in air and soundstage, so by comparison the sound without the JitterBug is a bit less alive.

I get a very different impression using the iPhone and Oppo DAC/amp. The sound is cleaner and clearer, but I don’t get a sense of greater openness or high-end extension.Â I assume this difference is because of a hardware limit in the iPhone itself, despite the fact that I play my own WAV-format CD rips on the iPhone for testing purposes.

The JitterBug may produce an audible improvement with any given computer music source, or certain portable music players that are using an external DAC/amp such as the Oppo HA-2 or FiiO E17k. The unpredictability of these differences is due to the nature of digital music sources and the hardware that delivers the data bits from one place to the next.

Think of some of the gross interruptions of digital transmissions that you’ve witnessed in radio and TV broadcasts, most often referred to as glitches. Now consider what happens when those glitches are reduced to tiny fractions of a second that are usually not noticeable, but can cause the audio and video to become less clear if they occur frequently enough. Part of the reason that many tiny glitches can smear sound is because the playback is in real-time and not corrected 100 percent with music player buffering.

The other part of the problem with digital audio quality is less understood. Most computer experts assume that an audio DAC will process only the correct bits and reject anything else, like a computer does when copying a file from the Internet or a local storage device to another storage location, or back up to the Internet from local storage. But DACs are not storage devices, and the job of the DAC is primarily to synchronize the data bits in playback rather than check the bits for completeness.

If the bits flowing through a DAC during playback are not complete for some reason, then it’s already too late to correct them in real-time playback, which is not a problem for computers copying files. The JitterBug’s task is to reduce or eliminate the kinds of interference that are micro-examples of the glitches example above, before the data bits hit the DAC.

MyMac Review Rating is 7 out of 10.Â This score is minus 3 points for “audiophile doubt” or skepticism as to what if anything is being done, and for the variability of results with different systems. Â Neither of those isÂ the fault of AudioQuest or the JitterBug, and being a $50 tweak, a very fair price when compared to other electronic tweaks.

Review note: Many audiophiles don’t believe in premium digital cables or filters on the premise that bits are bits.Â These people think that because a computer will copy a file from one place to the next and verify the file copy integrity automatically, everything traveling across a digital connection is also verified for the same accuracy. I can’t cover that topic fully in this short review, except to say that it’s a good subject to read up on, and this review expectsÂ (from theory and experience) that unwanted data may indeed ride along with the music bits in some systems. For the most part, that’s because music playback is real-time, whereas computer file-copy errors are usually detected and corrected automatically by the operating system, albeit not in real-time.