I have to be honest; I am a fan of the services that Amazon offers. I joined the Prime program way back in the beginning, and at that time the only real benefit was free two-day shipping. Over time, Amazon has added many new benefits to the service, Amazon Video being the most used by me.

A year ago, I purchased the Amazon Fire TV Stick, plugged it into a USB hub and one of my HD TVs HDMI port, and called it a day. It worked perfectly out of the box, and has continued to do so. However, there is no expandability, more CPU driven games canâ€™t be enjoyed, and it does not support voice control.

The new Amazon Fire TV, released in October 2015, does all that, and more.

Amazon has gone all-in with the new Fire TV. It ships with 8GB of flash memory, but you can expand that to 128GB via the microSD port. This is important not for movie size, as those come via streaming only, but for apps and games. There are a lot of apps and games available for the Fire TV, and they will eat away at the onboard 8GBâ€™s of storage quickly.

If you live and breath the Amazon eco-system, then the Fire TV is almost a no-brainer. It is intuitive to use, takes a small amount of space, and has all the connectivity the average user will need. It supports video from 720p all the way up to 4K Ultra HD, but for this review, only 1080p was used. At this resolution, the picture quality on movies and apps were crisp and clear.

Watching streaming content, with a fast internet connection, has been smooth and buffer free. When watching television shows via Amazon Prime Video, the next video is ready to go, and will automatically start unless you stop it. In my test, I watch three episodes of NewsRoom back to back, and never touched the remote unless it was to pause the show. This being Amazon, I could also pick up right where I left on on my Kindle Fire, the web, or even my PS4. 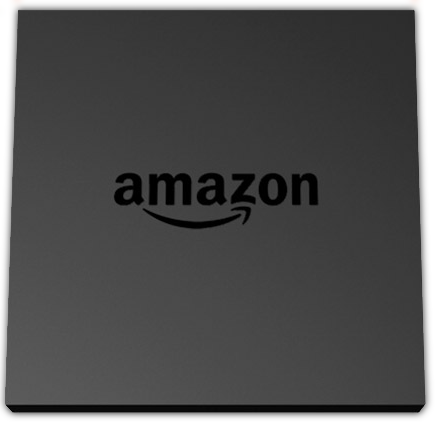 The interface of the Fire TV uses what is becoming the industry standard sliding panes. It works, but does not invite one to casually explore the vast library of Amazon Prime Video content. The same is true of Netflix, Apple TV, Chrome, and others. To remedy the ungainly UI, Amazon has introduced Voice Search. The included remote control has a built-in microphone, and a dedicated microphone button. To use it, just push and hold the microphone button. The screen change to â€œListening Nowâ€ at which time you talk.

In my test of the Voice Search, I first looked for â€œComedians In Cars Getting Coffeeâ€. The Fire TV found what I was looking for the first time, and showed me results. The video I wanted to watch was on the Crackle app, so the Fire TV gave me the opportunity to download it. That done, I did need to active the Crackle app on the Crackle website, after which all their content was available on the Fire TV. It was quick, painless, and worked perfectly. 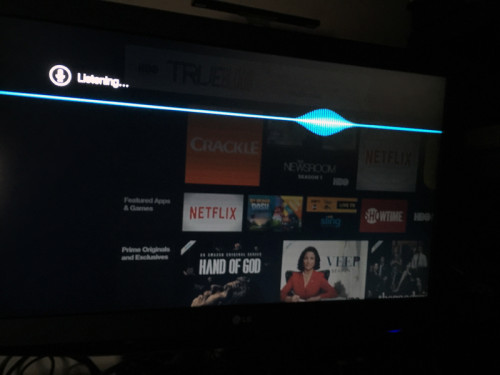 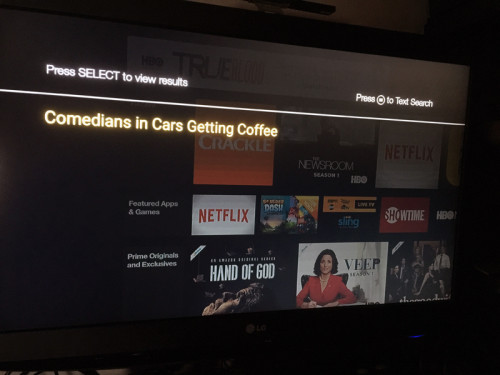 Next, I wanted to try something simple. While I had signed in to my own Amazon Prime account on this testing unit, I didnâ€™t give it any more information. So when I asked â€œWhatâ€™s the weather outsideâ€ I was not sure if it would (a) know where I am, or (b) figure out I am asking about my weather, or a TV/Movie with that name. (Are there any?) Brilliantly, the Fire TV knew where I am, and showed me the current weather conditions as well as the forecast. But it didnâ€™t just show me, it told me with a nice sounding female voice reading the temperature, what the weather would be tonight, etc. Very nice.

Some voice commands do not work well, such as â€œShow me games.â€ That was met with â€œSorry, I couldnâ€™t find the answer to your questionâ€ This is not unexpected, but it would have been nice for the voice command results to have shown the games I have installed on the Fire TV.

Speaking of games, I did test a few, but no graphic heavy games. For this review, I downloaded and played Crossy Road, Pac-Man 256. Simple games that can be played with the included remote control, and thankfully they did. I does, however, demonstrate the opportunity Amazon has here with making a big splash with gaming. With a new Apple TV coming later this month with an App Store and a big focus on games, Amazon has beat them to the punch, and more, with a model with a dedicated game controller. The games themselves look terrific on my television, and the Fire TV had no problem at all running them.

The included remote is an update to last years remote, with the added microphone and button. Itâ€™s a very good remote, feels both new and familiar in your hand, and takes two AA batteries. The button placement is intuitive and minimal, which no television maker has figured out how to do yet.

In short, I really like the new Fire TV. I think it is a big step for the market, and while there is stiff competition coming soon, the Fire TV is both cheaper and has all the major video apps the average user would want. Back that up with Amazonâ€™s great customer service, and I expect many Fire TVâ€™s will find their way into customers homes this holiday season. The new Amazon Fire TV goes on sale today.