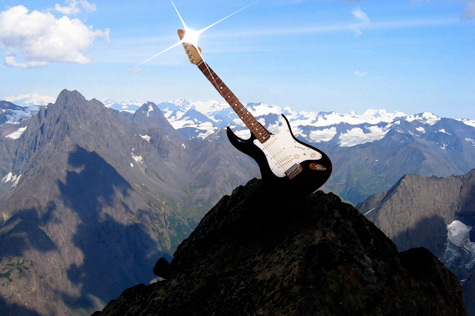 The recent kerfuffle between Taylor Swift and Apple regarding payments for streaming tracks during the companyâ€™s new Music service trial left me thinking about modern day recording artists. Can anyone make it big today or do they still have to rely on the old methods to do it?

Even before I became interested in Apple and its products I recall hearing how musical artists preferred Macs. This was something that Steve Jobs himself seemed very keen to promote and encourage. Although there were numerous applications that allowed musicians to do many of the same things on PCs, the Mac just appeared to have a cool factor that the beige box computers simply failed to emulate.

We have, however, come along way since the days of expensive big boxed applications that required some fairly heavy hardware and a certain degree of knowledge and dedication to get the most out of them. Nowadays you can simply plug your guitar into your iPad and lay down some tracks in GarageBand for iOS, add a vocal track, lay down a bass line and bang out a drum beat. The speed at which this has happened is simply amazing. It used to require hiring a recording studio to do what many talented folks can do today in their bedrooms and basements, assuming they still show a little dedication to their art.

This is only just the beginning. Creating music is one thing but promoting your hard work is another. Luckily, once again the modern computer and Internet age have made this so much easier. A real band will probably still have to hit bars and clubs to build a following but with so many social media opportunities it has never been easier to spread the word about your group. You can publish your performance on YouTube, start a Facebook page, engage with your fans on Twitter, use SoundCloud and yes, even sell your tracks via iTunes through an aggregator.

This brings me back to my opening paragraph regarding Taylor Swift and Apple. Miss Swift was lamenting Apple for failing to pay indie artists for any music Apple might stream during its trial period, all the while stating it wasnâ€™t about her. It was all about the indies. I found this rhetoric somewhat self serving and disingenuous because streaming comes down to volume. No, not how loud you like to listen to your music, but how many times it is streamed. Apple is reportedly paying .2Â¢ per stream. That means that any track will have to be streamed five times to make 1Â¢ or 500 times to make $1.

Now, call me an old cynic if you will but I feel it will be far more likely that Miss Swiftâ€™s tracks will be streamed millions of times more by her loyal fans than any indie band. As a result the country music turned pop star could be in for a substantial payday, at least in comparison to the poor indie artists she supposedly so gallantly and selflessly stood up for.

I realise it is doubtful streaming music will ever make an artist rich. Their current contracts with record labels simply make this an impossibility. This is not a new situation. The introduction of CDâ€™s and even music downloads more recently also resulted in artists initially being paid smaller amounts as these formats were not covered in their contracts.

All this leads us back to the artists making music off their own back, playing clubs, promoting themselves, building a following, learning their trade and searching for that elusive big break. For many it will probably never come to be, but for a select few who have the talent, who are willing to do the hard work and happen across that important and necessary little piece of luck they may find themselves on top of the pile knowing that they got there on their own. They didnâ€™t need the old ways, or the record labels to do it.

The consumer has supposedly already decided that streaming is the future they want. As CD sales and music download profits continue to fall the uptake in streaming services continues to grow. Technology is once again changing the landscape and the old guard are once again trying to fight the inevitable.

I hope that the hardworking artists realise that the barrier between themselves and their potential audience is much thinner than ever before and the opportunities such as digital communications and streaming services allow them to engage with an audience that might be hungry for their talent. They are the ones who can truly challenge the established system even if it’s still a long way to the top if you wanna rock ‘n’ roll.

One thought on “Are We There Yet? – Itâ€™s Still a Very Long Way to the Top”