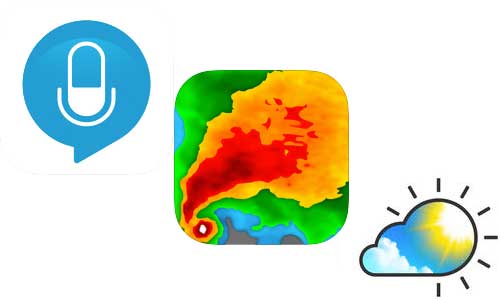 The three Apalon Apps apple watch apps: Speak and translate; Weather Live; and NOAA Radar pro are some of the first released for the Apple WatchÂ and highlight the Apple Watch’sÂ utility for convenient interactions and useful notifications.

With the launch of the Apple Watch, there has been a slew of watch apps released. By design, third-party apps are currently only capable of functioning as companions to an iPhone app, providing quick notifications or a simple interface for interactions, but ultimately being driven by the iPhone. Unfortunately, this means third party apps launch slowly and can take many seconds to engage. Nevertheless, there is an exciting opportunity for developers to identify useful features and define the best methods for interacting with watch apps, with apps still in their infancy.

Speak and translate uses the excellent SiriÂ dictation on the watch to translate a short phrase into one of 46 available languages. Testing input and output in several languages, I found the translations to be as accurate and snappy as that provided by the similarly excellent iPhone app. The interface is simple yet clean (1) with one pane displaying the input button and the second revealed by swiping right, the text output. (2) Switching between output languages is done viaÂ a press on the flag displayed on the screen (3). The result is nicely displayed as text on the screen, there being no method of playing sound on the watch itself.

The only limitation of thisÂ app is that input language can be changed only via the iPhone app. Of limited use is the appâ€™s glance which provides access to the last translation produced if desired. Although not cheap by iOS standards, this affordable app shines in circumstances where quick translation is required for both its ease of use and accuracy. It is particularly easy to envisage its use on overseas trips and vacations or when a quick translation is required.

Weather Live is a nice alternative to the default iOS WeatherÂ app, providing additional data and more granularity if required. For a location defined in the iPhone app, information on the current weather conditions and the upcoming 24 hours can be seen (4). A morning (9.00 am) notification (1) provides an overview of the daily conditions (2) and data such as the barometric pressure, chance of precipitation, humidity and visibility (2) are smartly displayed with navigation of the various panels being accomplished by simple left-right swipes.

One drawback is that the location can only be changed via the iPhone app. This might not be a problem if the conditions at home or work are required, but it is limiting for someone who travels around significantly. The glances panel (5) shows the current conditions with a nice visual image and is significantly more useful than the glance in the default app.

NOAA Radar Pro provides functionality that overlaps with Weather Live to some extent, but with one particularly important benefit: severe weather warning notifications can be sent for locations predefined in the iPhone app (1). If you live in an area which is prone to extreme weather this may be particularly useful. The iPhone app displays Doppler radar data (where available), but there is no function to view this on the Apple Watch. In addition to the severe weather warnings, current weather data for the defined location (2) and the 24-hour outlook (3) can be obtained by left-to-right swipes. The glances panel shows the current conditions with a nice visual image.

The interaction with the Apple WatchÂ is a more personal experience than other AppleÂ products. Therefore, the utility and value of apps will depend on the priorities of the individual. These three Apalon apps provide functionality that is complimentary to the default apps, with some unique features, in a clean and easy to understand interfaces; as such they are recommended to those interested in their functions.

MyMac Review Rating is 7 out of 10