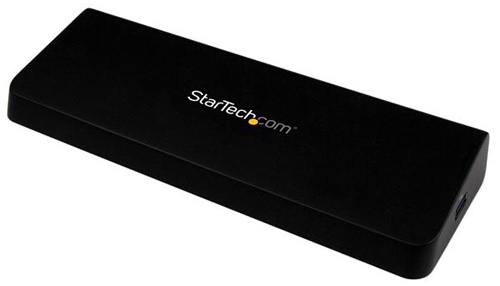 Portable computers are very popular, sometimes more popular than their desktop equivalent. The counterpart of using a portable computer is that you are limited in number of ports and extensibility. Thanks to USB 3.0 and StarTech Universal USB 3.0 4K Laptop Docking Station w/4K DisplayPort you can eliminate some of those limitations. 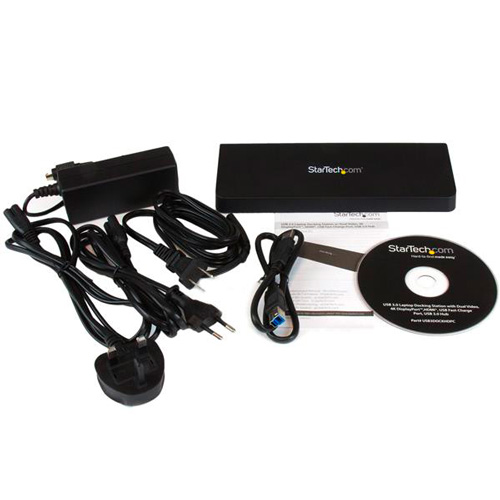 When you connect the dock to your computer, you automatically get a USB 3.0 hub with the four USB ports, and the audio port is also recognized and usable. The audio port can be used for a headset or external speakers. The side USB 3.0 port is also a fast charging port ideal to charge an iPad. The side USB port will charge any device even when the computer is not connected to the dock. The three remaining USB ports are standard ports and will charge devices when the computer is docked. 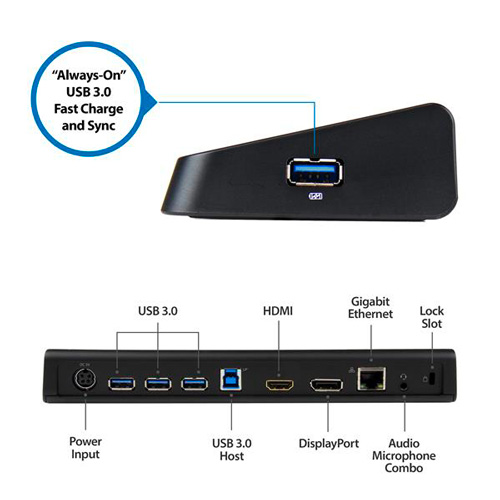 Every other port requires you install the drivers provided on CD or (preferably) downloaded from StarTech web site. Once the drivers are installed, the Gigabit Ethernet and video ports become active. On a Mac, you will find them in the Network and Displays panes in System Preferences. 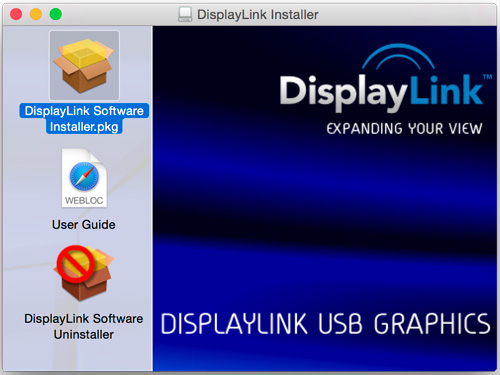 Connecting an Ethernet cable to a Gigabit Ethernet switch shows us that the dock can connect easily at Gigabit speed in full duplex. I wanted to test the Ethernet speed to make sure I was capable of obtaining a transfer speed close to what we would expect from a Gigabit Ethernet port.

To do so, I initiated a few bit-transfers sessions in terminal between my MacBook Pro and a Mac mini, both connected at Gigabit speed to the same network switch. To achieve this, I used a tricky command I found on Appleâ€™s Discussion forums that looks like this: dd if=/dev/zero | ssh user@ip.of.second.mac ‘cat >/dev/nullâ€™. This command sends a stream of zeros from the source to the null device of the second computer. This eliminates having HDD speed enter the calculation. I found that one stream was not enough to saturate the Gigabit interface, as I was getting a usage of around 40 MB/s. By having three running simultaneously, I was able to get up to a steady 80MB/s of transfer on the link. 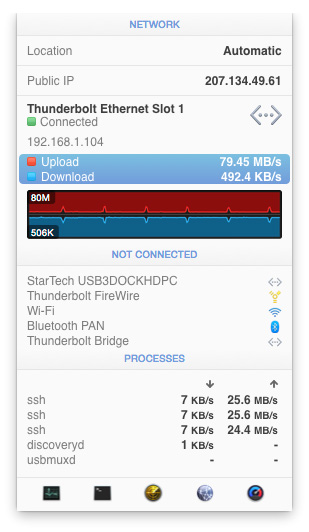 Next, I wanted to make sure I could get a normal USB 3.0 speed on the dock ports. I connected a Seagate Go Flex 1TB HDD to the dock, and tested with Blackmagic Disk Speed Test. With the drive connected to the dock or my MacBook Pro I got very similar results; it shows the dock performs as expected for a USB 3.0 hub. When I launched the disk test with the previous Gigabit at the same time, I saw the Gigabit speed fluctuating between 55 MB/s to 65 MB/s, while the disk test maintained its performance. I suspect that the drop and fluctuation of the network interface was due to the software emulation, while the Seagate drive was using the USB protocol directly without compromises. 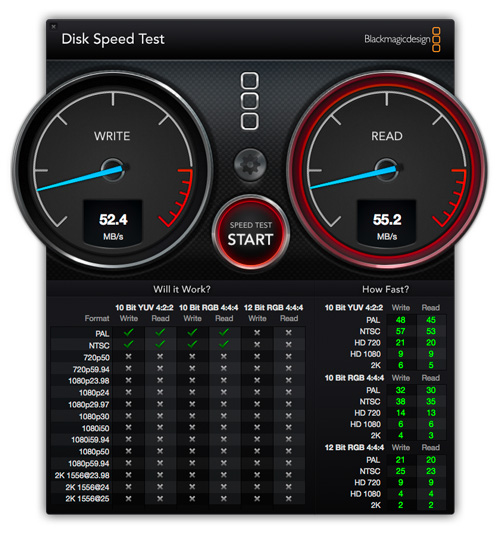 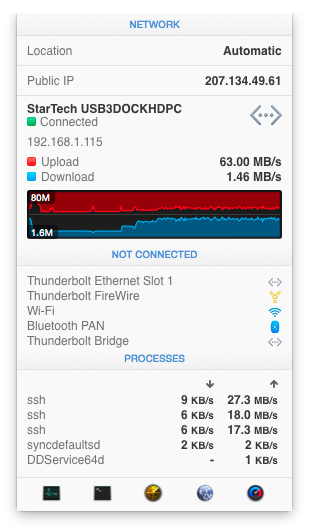 Where the device really fell short to my expectation was with the external display connections. I connected the dock to my Dell U2713H display trying both HDMI and DisplayPort ports. With both connections, my screen was affected by some color shift and flickering especially in the windowâ€™s title bar. Scrolling pages with lots of content in Safari was also flaky, as was switching desktops with Spaces. The capture below shows some unwanted artifacts on the left and right of the title bar. 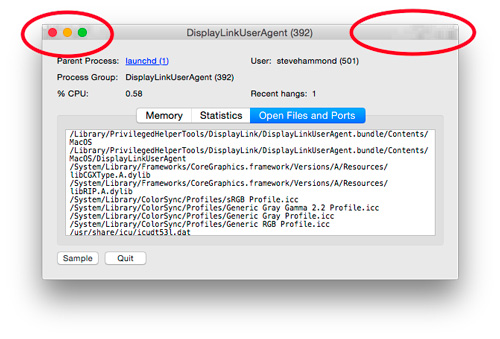 I saw my menu bar had no menu items displayed on it a few times, but items were there if I clicked in the menu bar. I also had to boost my mouse tracking speed, as I was experiencing slow movement on the external display. Even with that, the mouse pointer was acting abnormally and it was not tracking my movements properly. Something that was always wrongly displayed was the contextual menu of the trash can in the dock as you can see below.

I investigated a long time on this with activity monitor to make sure it was not the CPU or a process taking too much resources, but it was not the case. One fact is that the USB protocol is not designed from a hardware perspective to be used to extend displays. I then turned my attention to the display drivers, and found this link in the read me file. I found many known issues when used on Mac OS X Yosemite (10.10) and with Mavericks (10.9). I no longer have a computer running an older version of Mac OS X to test on them. 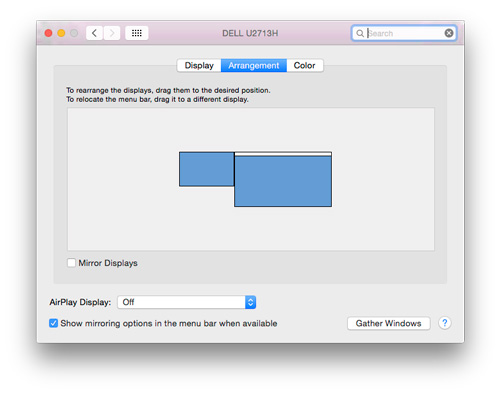 Even with the lid closed, the computer will show the built in display as active. This is all due to the external display being emulated via a software layer. You also wonâ€™t get any hardware acceleration (GPU) for the external display. One thing Iâ€™ve never seen before was a display refresh rate of 59.9 Hz in System Preferences, but bumping it to 60 Hz did not help. I found that the chipset of the dock is made by DisplayLink and I found this release note that explains many other limitations I have not encountered in my tests. 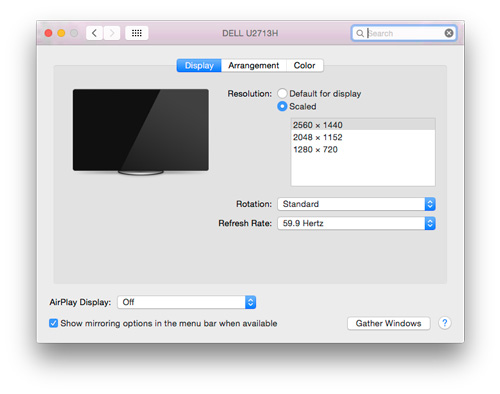 I could not test the 4K capability of the dock on a single display, as I do not have a TV or computer monitor with that resolution. When I look in the specifications in the manual, it is said that the unit can display up to 4K pixels at one time. That means a resolution of 3840×2160 on one display. Alternatively you can use both DisplayPort and HDMI ports and extend to two external displays. In that configuration the HDMI port is limited to 1080p (1920×1080) and the DisplayPort is limited to 2048×1152. As a proof of concept, I lowered the DisplayPort resolution and connected both ports to my Dell display just to verify I had three desktop available as show below. I also confirmed I really had three desktop using the PIP feature of my monitor. 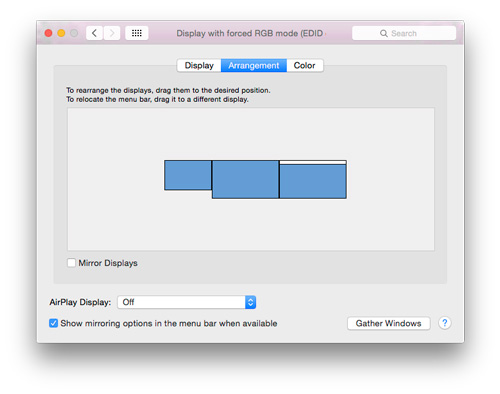 While I could not test the device with Windows, by reading the release notesÂ of the driver I was able to figure out a few things. The file describes a few recent improvements that resemble issues I had experienced on the Mac: image quality, frame rate, and mouse cursor latency. It is noted in the release note as improvement, which does not mean it is all perfect. But considering the Windows drivers are at version 7.7 compared to version 2.3 for the Mac, maybe it is a bit more polished running on a PC. It supports Windows XP (with older version of the drivers) up to Windows 8. 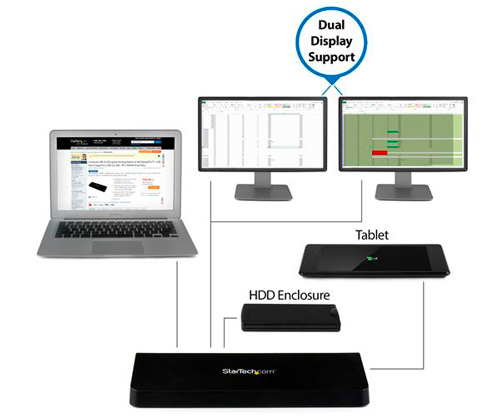 The StarTech Universal USB 3.0 4K Laptop Docking Station w/4K DisplayPort, is a well built device with lot of features, but it comes with a few compromises. As a USB 3.0 hub and to connect external speakers, the device works as expected. The fast charging USB port on the side is welcome to charge an iPad, even when the computer is not connected to the dock. 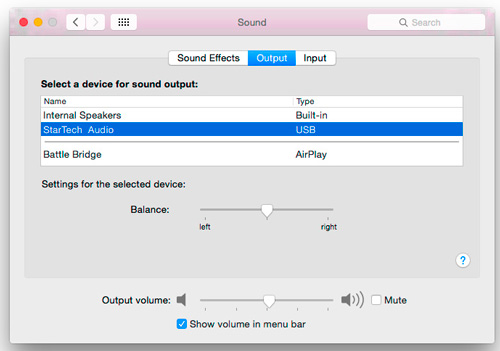 The Gigabit port performs well, even if the data flow is not constant all the time. The speed obtained is faster and more reliable than any wireless connection you can get. As for emulating external displays with a software driver, USB shows its limits. If you use that functionality when display performance is not required (examples: text editing, server monitoring, terminal windows), it is a very good all in one device. But I wouldnâ€™t recommend it for video or photo editing purposes. For video production, having the extra speed provided by the GPU is a must, and you wonâ€™t get it with this device.