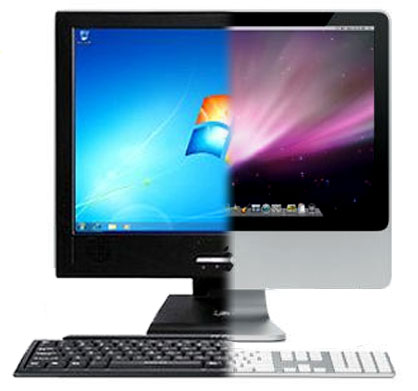 The question of whether to switch from a PC to a Mac arises from time to time. I made the move to a Mac in 2007, but the decision would not be as easy today. My only experience with Microsoft software these days is at work, and that doesn’t make it straightforward to compare the Apple world with what a PC has to offer. Why is that?

The Windows systems from both my current and previous employers have been locked down by the company to such a degree that I know for sure a home experience with Windows would be totally different due to the limited functionality imposed by the companyâ€™s policies.

At times I have been frustrated with being unable to do a job in Windows using the standard software, such as when annotating an image. I found far fewer restrictions performing this task on the Mac, but there are too many hurdles to performing this taskÂ on either a Mac or a PC.

Would a gamer move across to a Mac? Hard to say. I’m not really into gaming and to be honest I never really was, either on the PC or Mac. I knewÂ there was always a large community of Windows-based gamers. These users would beef up their machines with extra RAM, change a CPU, and update their motherboards. To a degree, that still happens. I’m not saying that the current high end Macs like the Mac Pro and 5K iMac couldn’t run some of the current games, but it’s unlikely those gamers would switch because of the lack of upgradeability.

I moved across to Macs at home because of the constant administrative processes I was having to go through on a PC to make sure that everyoneâ€™s data was kept safe. One of the final nails in the PC coffin came when I struggled to retrieve a hard drive with a ton of images on it. To say it was downhill from that point forward is an understatement.

Itâ€™s true that you can lose important data on the Mac too, but the ease with which you can backup and clone drives on the Mac was, and to a certain degree still is, a revelation to me. I also didn’t realize until I owned a Mac just how much time I had spent being the administrator for our home PC. After making the switch, I found myself with loads of time to enjoy using the Mac.

As a result, I decided to take a look at the reasons people now move across to the Mac, and the pros and cons of making that decision.

These opinions can vary and are very subjective.

Cost: The initial cost and what you get for your money is certainly a big decider in the process, and has not changed over the seven years that I’ve been a Mac user.The total cost of ownership has to be taken into account when buying a Mac, and that for me includes how much time you spend ‘doing admin.â€™ However, the higher upfront price remains a big hurdle for a lot of people.

Applications: Another consideration for a lot of people is the amount of software available. This is always one of those quality or quantity arguments. I’ve never been stuck and unable to do something on the Mac that I could have done on the Windows machine. Nevertheless, from my experience Adobe Photoshop Elements on the Windows side is far better than the Adobe version on the Mac, so don’t expect that software on the Mac is always superior.

Hardware: Iâ€™ve already mentioned the gamers and their quest for ever improved speeds no matter the cost and adaptationÂ  required, but what about Joe Bloggs just wanting to update his RAM or hard drive? Windows machines win that game pretty much hands down. Whether the internal updates are required or not is a different question. The way Apple restricts what you can physically change on a machine makes it inferior, in this regard, to a PC, from my experience.

No viruses: Everyone still assumes that you are safer on a Mac compared to a Windows machine. That is true but I wouldnâ€™t say totally safe. The Mac wins this arms race, at least for the time being, and I hope for a few years to come.

I have what I need: Normally when you buy a Mac you know exactly what you are going to get. I still hear about the extra bloatware that companies stuff onto machines in the Windows world. The everyday PC user may not know what he’s buying in terms of extraneous PC software, nor will he know how to get rid of the stuff he doesn’t need. This scenario has improved over the years but it still happens. I’m going to give Windows machines a lot of leeway here and call that a draw!

Built for designers: You buy a Mac because youâ€™re a professional designer and the software and hardware are so much better on a Mac. That may once have been the case but I wouldn’t say it is any longer the reason to move across. Since so much software now lives in the cloud, this is much less a consideration than it once was. Even now, Mac third party software does seem to be aimed more at user satisfaction. I give Mac the upper hand in this arena.

It just works: Using a Mac is more intuitive than a Windows machine. When I started using a Mac, I had to blog about the fact that I couldn’t find where the hash/pound symbol was. On the UK Mac keyboards you cannot find that symbol. Actually, you can. Itâ€™s Alt/Option/3. Finding that caused me a problem as I had an online password with that symbol in it. It’s all down to what youâ€™re used to. I’m really not sure about Windows 8. I haven’t seen that much of it but, from a userâ€™s perspective, I stillÂ don’t like it. Iâ€™ve heard some people love using it. The bottom line is there’s less difference between the two OS’s than perhaps there once was. Let’s be honest: once you buy into an OS, you’ll learn what you need to learn to get things done.

I haven’t spoken about Linux or Google because this is beyond the scope of my commentary. I have used various Linux distributions and although I enjoyed messing about in the environment, my family would not. As for a Google Chromebook,Â  no thanks.

One last point: if money is not your major concern, go Mac. Why? Because you can always run the Windows OS on a Mac using a virtual machine. ‘Nough said.

One thought on “Would I still switch from PC to Mac?”